Real peace means the guns will have to go away

Apr 4, 2014 9:29 AM PHT
Carmela Fonbuena
Facebook Twitter Copy URL
Copied
The signing of the peace deal is the first step in a process that will take time 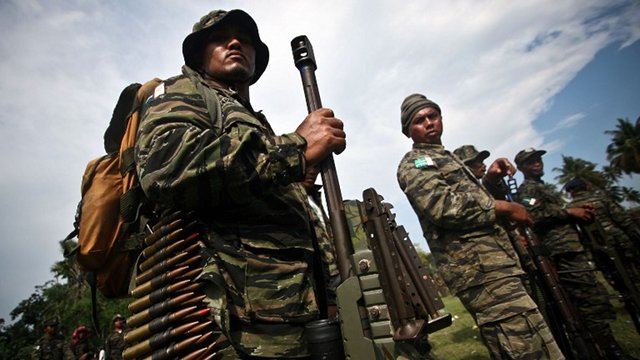 MANILA, Philippines (Updated) – After the signing, the groundwork begins. Rebels will soon have to give up their firearms, while politicians must do their share to craft and pass a law that makes peace more acceptable than war.

“Hindi komo nagpirmahan na, tapos na. Hindi. May mga stages pa ‘yan eh. Mga phases,” Defense Secretary Voltaire Gazmin told reporters in an interview in March. (They may have signed but it’s not over yet. There are stages. There are phases.)

Military presence in the region will be reduced. Peace and order will be the responsibility of the yet-to-be-created Bangsamoro Police Force, which is civilian in character. (Read the program for normalization in the Bangsamoro below)

This has never been done in post-war Philippines – in the scale that the agreement envisions.

It won’t be easy Military officers interviewed by Rappler are realistic about the challenges ahead, given the peace agreement’s ambitious timeline. The signing is the first step in a process that, they say, will take time.

“I don’t think it will happen [complete decommissioning]. There will be an attempt to do it. They are all armed. We are talking about changing a culture and tradition. It won’t be so easy,” said the military officer.

“If you can demobilize them by 50%, that will be great,” said another officer.

Hermoso, who hails from Cotabato City, is celebrating. “Being a stakeholder, I have high hopes. There are new challenges in ending the 4-decades long conflict but the confidence is high. You can feel that the communities are very supportive,” he said.

Part of the change can be attributed to how Filipino soldiers have learned to respect Muslim culture.

“There is a realization also that the problems of insurgency are multi-faceted. It is not the military alone that can solve the problem. There are economic issues, political, religion. It’s complex that there are legislative issues that need to be answered,” added military spokesman Lieutenant Colonel Ramon Zagala.

The Ampatuan massacre in 2009 – the world’s worst case of election violence that embarrassed the military – may have been the catalyst that forced the military to reflect and give the peace process a chance.

“It was a turnaround. It was a moment of opportunity. I cannot explain it. It changed the attitude of soldiers. Ten years ago, it was a question of who has the most guns. After the massacre, it was different,” said the military officer.

In contrast, when the MNLF signed a peace agreement with the Ramos administration, there was no demobilization or disarmament plan. “There was only the plan of integration. We cannot integrate them all,” recalled Zagala.

MNLF fighters joined the police and the military, but not all were qualified. Those who were not integrated managed to keep their firearms. In due time, the disgruntled ex-rebels returned to fighting government.

Convinced they were left out in the peace process, MNLF rebels seized Zamboanga City in September last year, paralyzing the city and causing the worst security nightmare for the Aquino government.

The siege of Sabah by the Royal Security Force of the late Sulu Sultan Jamalul Kiram III was also linked to the peace process because it was mounted by former MNLF members who had complained of the MILF’s silence on the Sabah issue.  – Rappler.com