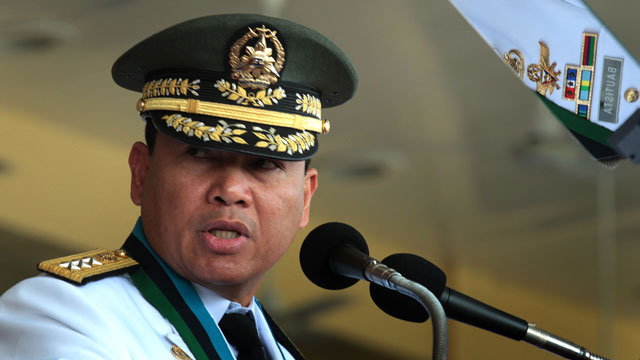 TARLAC CITY, Philippines – The Philippine military feels a sense of “fulfillment” after a successful mission to rotate troops in the disputed Ayungin Shoal over the weekend.

Armed Forces chief General Emmanuel Bautista said the military is ready for the consequences of the military mission last Saturday, March 29, stressing that what Philippine troops did was not provocative.

“We will be ready with any consequences. The fact that we pursued our case… means we will be prepared to suffer any consequence,” Bautista told reporters Tuesday, April 1.

“The fact that we filed an arbitration case [means] we should be prepared. Don’t expect us to bow to to terror. Do you want that? We have to assert our rights. We are doing it in a very peaceful manner. We brought it to court,” Bautista said in a mix of English and Filipino.

It’s China that has been provocative, he added.

“We’re not provoking China. We are just doing our job to resupply our troops in Ayungin shoal. That will continue. We will assert our sovereignty in that place. We have every right to do that. It is our right to do that,” said Bautista.

“Is that provocative? We used civilian ships. Sila ang provocative doon. Sila ang nangharang. Napakarami ng coast guard nila at PLA Navy sa lugar na ‘yun. Sino ang nagpro-provoke?,” he added. (It’s China that was being provocative. They blocked our ship. They had many coast guard personnel and ships in the area. Who is guilty of provoking?)

Speaking to Chinese reporters Monday, March 31, Chinese Foreign Ministry spokesman Hong Lei questioned the timing of the trip, which was made a day before the Philippines filed a 4,000-page written pleading against China’s expansive claims over the West Philippine Sea (South China Sea). (READ:PH strikes back, files pleading vs China)

“It fully demonstrates that the purpose for the Philippines’ willful pursuit of the international arbitration is to cover up its illegal occupation of China’s territory and trouble-making in the South China Sea. It is a political provocation by abusing international legal means,” Hong said. (READ: China: Ayungin trip betrays PH intent)

Bautista said the Philippines will maintain its troops in the area.

“We will continue to resupply our people there. We will maintain our people in Ayungin. Akala ko ba ayaw nila ng away (I thought they didn’t want any conflict). Why will they fire at our vessels? Why will we do that?” Bautista was referring to a January 27 incident in Panatag Shoal where Chinese coast guard ships used water cannons to drive away Filipino fishing vessels from the area. (READ: Chinese used water cannons vs Filipino fishermen) – Rappler.com