From nurse to SM Mall of Asia shootout hero

Apr 2, 2014 9:19 PM PHT
Bea Cupin
Facebook Twitter Copy URL
Copied
Four female police officers will be given an award on April 7 for their quick response when the SM Mall of Asia was robbed on March 30 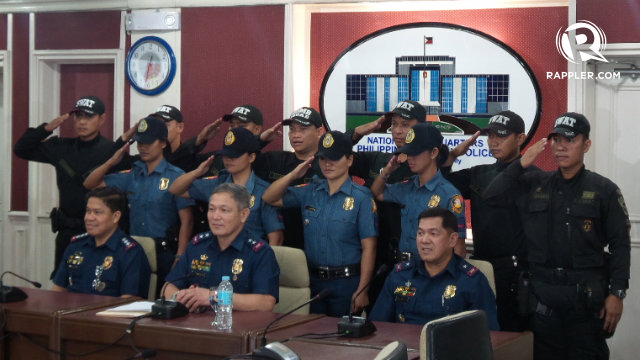 MANILA, Philippines – Police Officer 1 Maricel Rueco was not supposed to be a cop.

After receiving her nursing degree, however, Rueco was left with little options for employment. After a nursing boom in the country, graduates were aplenty but stable jobs were few and far between.

It’s what drove Rueco to pursue a career in the Philippine National Police (PNP).

At first, Rueco said, her family was against her joining the police force. Not too long ago, 3 of her relatives died when they were ambushed by suspected rebels in Rizal.

Rueco is one of 4 lady cops who were among the first responders during a shootout at the SM Mall of Asia on Sunday, March 30. Rueco, along with her colleagues PO1 Juliet Macabadbad, Delia Langpawen, and Marcelina Bantiyag, engaged in a shootout after armed men robbed a jewelry store inside the mall.

They will receive an award from the PNP leadership on Monday for their heroic act.

Three of them – Rueco, Langpawen, and Bantiyag – trained together with the Regional Public Safety Battalion in 2013. When the robbery in SM Mall of Asia happened, they were a little over a year in service.

Macabadbad, the 3 womens’ direct superior, is ahead by a year. The 4 were assigned to the mall to augment Pasay City police personnel.

It’s not easy being a woman in a institution dominated by men. Bantiyag, Rueco’s partner, says gender discrimination is an issue. But sometimes, she says, it can be an advantage.

They proved cynics wrong. On Wednesday, the PNP presented to media the 4 lady cops, alongside 7 members of the Pasay City Police Special Reaction Unit. Macabadbad, Rueco, Langpawen, and Bantiyag will be formally awarded and recognized by the PNP on Monday, April 7.

Bantiyag admitted, at first, she didn’t tell her family about the incident because they would worry too much. But the cat’s out of the bag. The 4, after all, were commended by President Benigno Aquino III himself during the PNP’s Araw ng Parangalan sa Kapulisan.

The award – either a Medalya ng Katapangan or Medalya ng Kagalingan – is unexpected. But it’s a welcome pat on the back for the Rueco, who says all she looks forward to is a clean career in service – hopefully, without injury.

(My dream is to be safe, healthy until I finish my service. My family worries. But of course, what’s most important is to be able to help people without hurting anybody.) – Rappler.com