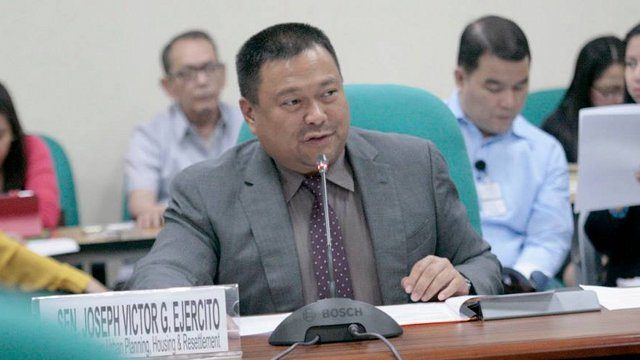 MANILA, Philippines – While his brother denounced the plunder case over the pork barrel scam as an April Fool’s Day operation, Senator JV Ejercito welcomed it as an opportunity for the Senate to “move on.”

Ejercito said the Ombudsman’s decision to sue his elder half-brother and Senators Juan Ponce Enrile and Ramon “Bong” Revilla Jr for plunder will give them a chance to defend themselves and clear their names.

He added that the case will “sort out the guilty parties from those who are really innocent.”

(Perhaps the Ombudsman’s case before the Sandiganbayan will be good for the Senate as an institution and for the accused senators. The whole nation has spent a lot of time on this case and it is time for everyone to know the truth in a fair court and without any taint of politics.)

The opposition senator said his brother and the two other senators can “prove once and for all whether or not they are involved in the so-called PDAF scam.”

Echoing his ally Vice President Jejomar Binay, Ejercito urged the Ombudsman to continue investigating the scam “without looking into political color or affiliations of politicians they perceive [to be] involved in the case.”

As for the Senate, Ejercito hinted that it should wrap up its probe into the controversy, even if some of his colleagues called on the blue ribbon committee to investigate other lawmakers and non-governmental organizations (NGOs) not connected to alleged scam mastermind Janet Lim Napoles.

(The Senate can allot its time to face many issues involving the nation that have a connection with improving the lives of our fellow Filipinos.)

Along with Senator Nancy Binay, Ejercito earlier questioned the decision of committee chairman Senator Teofisto “TG” Guingona III to release the draft report recommending plunder charges against the 3 senators without consultation and signature of majority of the committee members.

Ejercito had a sibling rivalry with Estrada. He has said that he will do his job in the Senate investigation even if his brother was accused.

Estrada, Enrile and Revilla are indicted for plunder for funneling development funds to Napoles’ bogus NGOs in exchange for millions of pesos in kickbacks.

Senator Sergio “Serge” Osmeña III, vice chairperson of the blue ribbon committee, said the senators might meet in caucus when session resumes in May to decide whether or not to suspend the indicted senators.

Estrada and Revilla have said they will not go on leave despite their indictment.

“We can suspend them, there will be grounds but we’ve never done it before. It will be the first time. Senate President [Franklin] Drilon also announced that if the Ombudsman or Sandiganbayan says ‘Suspend those 3,’ we can suspend. But that’s passing the burden of making that decision. I don’t know. Let’s wait ‘til the Senate reconvenes,” Osmeña said on Rappler’s #TalkThursday.

Like Ejercito, Osmeña said it will be up to the remaining 21 senators to redeem public trust in the Senate following the scam.

“It’s been a terrible blow to the reputation of the Senate. We’re supposed to be an institution like Caesar’s wife, above suspicion. The level of respect has fallen by several degrees, several dozens of degrees. It can even be felt among the senators where they feel that the senators are under suspicion now even if they did not do anything,” Osmeña said.

“We hope those of us who are left will be able to recover the respect the institution used to enjoy among the electorate.” – Rappler.com