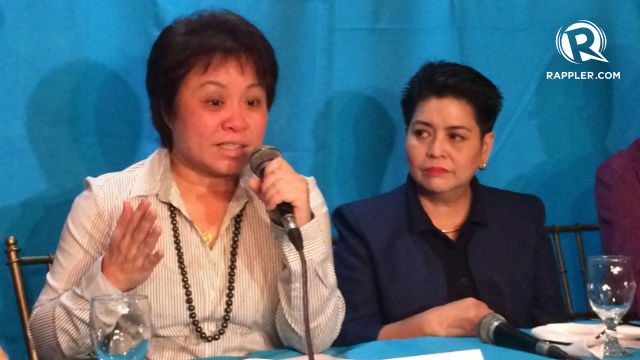 Facebook Twitter Copy URL
Copied
After the ruckus over the BIR ad that depicted doctors as cheats, the PMA and BIR join forces to urge Filipinos to file their income tax returns before April 15

MANILA, Philippines – Like her colleagues in the medical profession, Dr Minerva Calimag also felt strongly about the controversial advertisement that the Bureau of Internal Revenue (BIR) put out, depicting doctors as tax cheats.

Calimag, however, would rather let bygones be bygones. As the new president of the Philippine Medical Association (PMA), she appeared with BIR Commissioner Kim Henares in a press conference on Thursday, April 10, to call on taxpayers – especially doctors – to file their returns before the April 15 deadline.

“I felt the profession should not have been treated that way, but, having said that, that is already water under the bridge. We want to move forward, we’re looking forward to better relationships with the BIR, of course, with Commissioner Henares,” Calimag said.

In March, many doctors cried foul when the BIR released advertisements, which portrayed doctors as tax cheats. The PMA, then led by outgoing president Leo Olarte, called the ad “absolutely unfair,” insisting doctors do not deserve to be portrayed as tax evaders.

Weeks later, the BIR filed a complaint against Olarte for his alleged attempt to evade taxes. His term as PMA president will end on May 30. (READ: BIR ad on cheating doctors: A plan that backfired?)

After the public outcry from doctors and other groups, Henares said the ad was in the end effective in relaying a message they had been saying since 2010.

“[The ad was] effective in a sense that it raised public awareness. It must be effective, because if you have an ad, and no one talks about it, then you did not achieve its purpose,” she said.

The commissioner also said she has nothing against doctors. (READ: Henares: Ad on tax-cheating doctors a statement of fact)

“I had wanted to be a doctor and still want to be a doctor if ever that’s possible. [But] what my job entails is really requiring everyone to pay their taxes whoever they may be, may it be a friend of mine or a relative of mine,” Henares said in a mix of English and Filipino.

Paying taxes, she said, is a manifestation of obeying the laws of the land.

As of 2013, only 1.8 million self-employed individuals are registered, but only 24% or more than 400,000 have filed their income tax returns (ITRs). This is 1 out of every 4 self-employed professionals, Henares noted.

The BIR chief again reminded Filipinos of the April 15 deadline to file ITRs. Doors will be closed at 5 pm, but those still in line will still be entertained.

“If we all file our ITRs and pay our taxes [the P1.456-trillion target] can easily be doubled if all of us just do our duties. Imagine how many roads, schools, and hospitals we can build. And maybe our doctors don’t need to go abroad. We can keep them here,” Henares said.

The PMA and BIR will soon work on a website which can help doctors better understand and compute their taxes.

“We would like to express our commitment to help in the campaign for the medical professionals to pay the right taxes – what we should be doing as good citizens of our country and to help in nation building,” Calimag told Henares. – Rappler.com