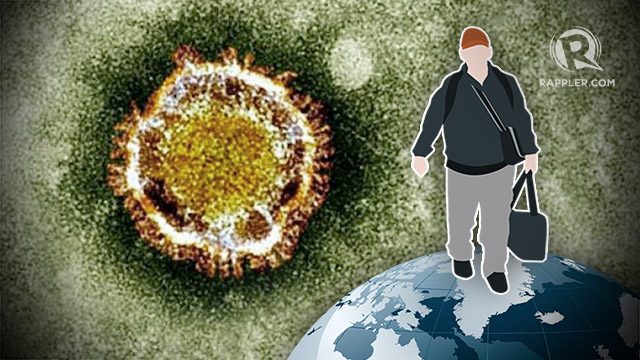 MANILA, Philippines – The Department of Health (DOH) on Thursday, April 17, asked more than 400 passengers who shared an airline flight with a man infected with the MERS virus to have themselves checked by the department immediately.

The move was a precautionary measure to ensure none of them were infected by the man who has since been quarantined along with his family, a health official said. (READ: DOH announces first case of MERS virus infection in PH)

A Filipino who arrived on the flight from the United Arab Emirates has tested positive for the MERS (Middle East Respiratory Syndrome) virus, the department announced on Wednesday, April 16.

Passengers on the Etihad Airways flight EY 0424 on April 15 were told to call health department emergency numbers listed in the media even while the department tries to track them down, said Lyndon Lee Suy, the spokesman for the department’s emergency service.

“We want to make sure that none of them would have gotten the virus. We don’t want to miss a single case,” he told Agence France-Presse (READ: PH warns OFWs about Middle East virus)

The 418 passengers will be asked if they have fever or flu-like symptoms that might be signs of the sometimes fatal MERS.

The spokesman could not immediately say how many of the passengers had already been contacted.

In a separate statement Thursday, DOH said the OFW was already in transit from the Ninoy Aquino International Airport (NAIA) to his hometown when the department tracked him and directed him to report to the nearest hospital.

According to the DOH, he is already confined at a medical center, while those who welcomed him at the airport are undergoing observation.

As of Sunday, April 13, the World Health Organization reported a total of 228 laboratory-confirmed cases, with 92 deaths from 10 countries, mostly from Saudi Arabia and Qatar. (READ: Filipina dies of Mers virus in Saudi)

The MERS virus is considered a deadlier but less-transmissible cousin of the SARS virus that erupted in Asia in 2003 and infected 8,273 people, nine percent of whom died.