Tuason handed over a manager’s check in the name of the Republic of the Philippines in the presence of Ombudsman Conchita Carpio Morales and Justice Secretary Leila de Lima, Assistant Ombudsman Asryman Rafanan said in a press conference.

The amount, which corresponds to the amount of kickbacks Tuason claimed to have received from the pork barrel scam, will be remitted to the National Treasury.

“In a 5-page Immunity Agreement forged between the Ombudsman and Tuason, Tuason was granted immunity from criminal prosecution in the said PDAF cases in exchange for undertaking to ‘testify on her personal knowledge’ on these cases and ‘produce documents in her possession on the details of the alleged misuse of the PDAF, and subject to the terms and conditions in the Immunity Agreement,” Rafanan said. 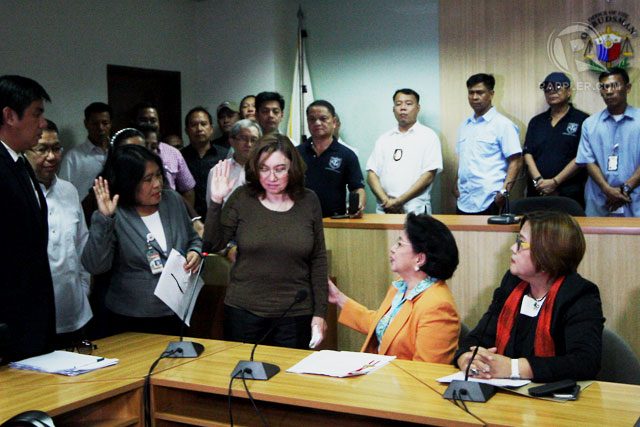 Rafanan said Tuason’s move to return P40 million to the government was not a “major consideration” in the decision.

It was Tuason’s direct knowledge of transactions and the fact that she had not been convicted of any offense that convinced the Ombudsman to grant her application for immunity, Rafanan said.

“She has direct knowledge of the transaction and the statement dovetailed with the other evidence available… it’s not really because Tuason returned the amount in consideration,” Rafanan said.

“I think the return of the amount was by admission of Tuason herself. It was not one of those major considerations by the Office in the granting of immunity. It just so happened that she voluntarily offered, and the Office could not reject that offer,” he added.

Asked whether the Ombudsman conducted an independent investigation on whether the amount returned by Tuason was enough to cover all the kickbacks she received, Rafanan said there was “no need” to do so since Tuason admitted the amount herself.

Tuason’s lawyer Dennis Manalo earlier said they arrived at the P40 million amount based on the records of principal whistleblower Benhur Luy.

Reacting to the grant of immunity to Tuason, Presidential Spokesperson Herminio Coloma said, “We hope that with such immunity, Ms Tuason can reveal the whole truth, thus, aiding in our quest for justice.”

The immunity covers only criminal cases related to the pork barrel scam. It does not include Tuason’s forfeiture proceedings before the Manila Regional Trial Court, as well as any liability she may have in the cases resulting from the probe on the Malampaya fund scam.

Responding to the development, Senator Jinggoy Estrada said he already expected Tuason to get immunity. He reiterated that the justice department is out to pin him down, along with opposition senators Ramon “Bong” Revilla Jr and Juan Ponce Enrile. (READ: Napoles, 3 senators indicted for plunder)

“She was included as one of the accused by the DOJ, NBI in the joint resolution earlier issued by the Ombudsman to make it appear there was a semblance of fairness in this ongoing investigation. But we all know this is already a done deal, and the only real targets of this persecution from the very beginning are the 3 senators,” Estrada said in an interview on ANC.

Estrada questioned the Ombudsman’s decision, saying Tuason was the brains behind the P900-million Malampaya fund scam. The Ombudsman clarified though that it was giving Tuason immunity only in the pork barrel scam case.

“First of all, I really do not know how they derived the amount of P40 million. I know she is the mastermind of the so-called Malampaya scam and up to now, the Senate blue ribbon committee has not started investigating the alleged Malampaya scam,” Estrada said.

The senator said he will consult his lawyers on the next legal action to take.

“In the unfortunate event that an information will be filed before the Sandiganbayan, I am very confident we will be victorious in the end and Mrs Tuason will crumble in cross-examination,” Estrada said.

As of Friday, Napoles has filed a motion for reconsideration with the Ombudsman only and has yet to submit a full testimony.

“The consideration of Napoles as state witness is it would have to be considered vis-a-vis her testimony and she has not given her testimony yet so there’s nothing to consider,” Rafanan said.

Napoles’ testimony has yet to be completed, as her initial session with the DOJ did not cover everything she knew of the scam. The DOJ is keen on acquiring Napoles’ full testimony in writing, as multiple sessions with her may negatively affect her health condition.

Cunanan’s testimony, on the other hand, was already submitted to the Ombudsman for evaluation. – with reports from Ayee Macaraig and Buena Bernal/Rappler.com