May 7, 2014 5:04 PM PHT
Ayee Macaraig
Facebook Twitter Copy URL
Copied
'Even if I have relatives, partymates, colleagues, of course I am elected by the people,' Ejercito says 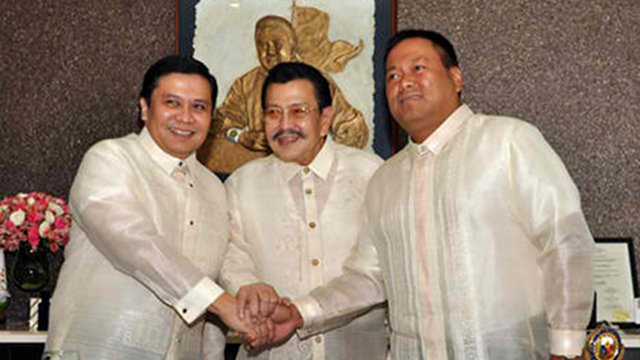 MANILA, Philippines – “More than the responsibility to my colleagues, I am accountable to the people who elected me.”

This is how Senator JV Ejercito explained his decision to sign the Senate blue ribbon committee report recommending plunder charges against his half-brother, Senator Jinggoy Estrada, and allies in the opposition Senators Juan Ponce Enrile and Ramon “Bong” Revilla Jr.

Ejercito is among 10 senators who signed the report on the pork barrel scam as of Wednesday, May 7. The number is just one signature shy from the majority of 11 members of the 20-member blue ribbon committee.

The minority senator said that he signed the report with the reservation that it is incomplete. He said the investigation should include all non-governmental organizations, not just those linked to alleged pork scam mastermind Janet Lim Napoles.

Repeatedly asked by reporters if he was endorsing the committee finding recommending plunder charges against his brother, Ejercito said, “Not necessarily.”

Yet when asked why he signed it even if his brother was implicated, Ejercito responded, “Bagama’t may kapamilya ako, kapartido, mga kasamahan, siyempre ako’y halal din ng taumbayan.” (Even if I have relatives, partymates, colleagues, of course I am elected by the people.)

He later told Rappler, “It’s the right thing to do.”

Told that Estrada got mad at him, Ejercito quipped, “Sanay na naman ako. Lagi namang galit sa akin iyon!” (I am used to it. He is always mad at me anyway!)

In a separate interview, Estrada said of his brother’s move, “No comment.”

Sons of former president now Manila Mayor Joseph Estrada, Jinggoy and JV have had a sibling rivalry that extended to their Senate terms. Ejercito earlier said it was rooted in San Juan politics, where they both served as mayors.

Senate blue ribbon committee chairman Teofisto “TG” Guingona III released the draft report on the scam on April 1. Ejercito earlier dropped hints he will sign the report, saying his conscience will weigh heavily on his decision.

Estrada, Enrile and Revilla face plunder charges for allegedly conniving with Napoles to funnel their pork barrel funds to her fake non-governmental organizations in exchange for millions of pesos in kickbacks.

One signature to go

Lawyer Rodolfo Noel Quimbo, director general of the Blue Ribbon Oversight Office Management, released on Wednesday the list of senators who signed the report so far. They are:

Quimbo said in counting 20 members, the committee included the 17 regular members plus the ex-officio members: the Majority Leader, Minority Leader, and the Senate President Pro-Tempore. Even Estrada and Enrile who inhibited from the probe were counted as members.

Once there are 11 signatures, the committee will submit the report to the Bills and Index service to be calendared and sponsored on the floor, Quimbo said.

Elaborating on his reservation, Ejercito said the committee should continue investigating the 80 other NGOs that the Commission on Audit found to be questionable.

“If the government is serious about fighting corruption, it should cover all [culprits]. No stone should be left unturned, as they say. If it’s a partymate, ally or whoever will be implicated, we should find out the truth,” Ejercito said.

The senator clarified that it was not for the senators to judge the guilt of their 3 colleagues in the minority.

“I signed because I believe there should be an investigation but I think it is lacking. Regarding the plunder case, the proper forum would be the courts. It is also the opportunity of the accused to defend themselves in the proper forum, the Sandiganbayan,” he added.

Poe also said she signed the report but with her own reservation that the investigation should be reopened to take into account “supervening events” like Napoles’ sudden turnaround after the release of the report.

“I have a recommendation there for an amendment, basically because of what happened after the hearing. Personally, I also believe there are other things we can add to the report like our opinion on the other whistleblowers,” she said.

Poe opposed the granting of immunity to provisional state witness Dennis Cunanan after pointing out inconsistencies in his testimony about his educational and professional background, wealth, and denial that he received kickbacks.

Yet on the plunder recommendation, Poe said she supported this even if she is also friends with Senator Estrada. Her father, the late actor Fernando Poe Jr, was the best friend of former President Estrada.

“I think based on the evidence we gathered from the other whistleblowers, there is consistency so we can continue filing the case,” she said.

‘What’s there to verify?’

Poe and Escudero also reiterated their call for Justice Secretary Leila de Lima to release the list of lawmakers Napoles implicated in the controversy. They said there was no need to verify the list prior to its release.

“When that’s released, it does not mean those listed there are really guilty. We still need to do our work of checking if it’s true or not. It’s natural people will doubt because the one testifying (Napoles) is the one allegedly involved. But they should release it because people are all the more doubting why they are hiding it,” Poe said.

Escudero echoed her call, saying De Lima cannot amend Napoles’ affidavit anyway even if some names turn out to be innocent.

“Let it stand or fall based on what it says there.” – Rappler.com