MANILA, Philippines – The campaign for an anti-political dynasty law picked up steam at the Senate on Tuesday, May 13, as the Senate committee on electoral reforms and people’s participation conducted discussions about the decades-old issue.

The Senate committee hearing took place exactly a year after the 2013 midterm elections, and a week after the House version of the anti-political dynasty bill was sponsored before the plenary for the first time in 27 years.

Ejercito’s Senate Bill 1906 and two other anti-political dynasty bills were tackled during the hearing.

The committee hearing focused on the definition of a political dynasty, the coverage of the prohibition, and the different scenarios the proposed bills seek to address.

The resource persons accepted Section 5 of SB 1906, which seeks to prohibit a spouse or any person related to an incumbent elective official “within the 2nd degree of consanguinity or affinity” to run for any elective office in the same province in the same election. (READ: Disqualify candidates from ‘political dynasties’)

But they wished that the committee also consider “overlapping jurisdiction,” or having national and local candidates running in an election at the same time.

“Relatives of national officials or candidates should not be allowed to run for key local positions like governor, district representative, or mayor anywhere else in the country,” said Eirene Jhone Aguila, of Andaya Mo. 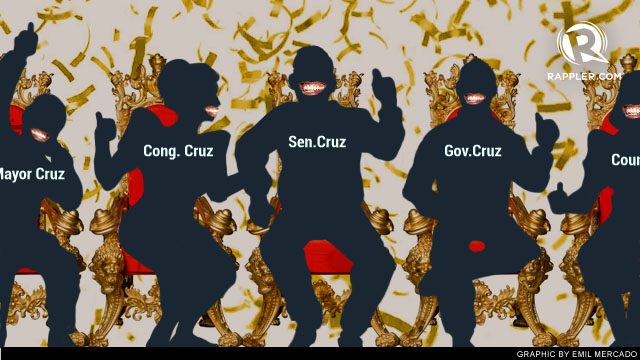 “If all family members would seek multiple offices but none of them is an incumbent official, they should all be prevented from running,” said PICAD.

The Commission on Elections (Comelec), for its part, suggested that the prohibition extend to barangay captains, notwithstanding the non-partisan nature of barangay elections.

“These barangay captains belong to Association of Barangay Captains (ABC) in each town or city. They elect an ABC president, who would then sit as an an ex-officio member of the town or city council. Therefore, he would have the same power as an elected official,” said lawyer Albert Rodriguez of Comelec.

Comelec also proposed the following options if 2 dynasty members – not related to an incumbent elected official – would decide to run at the same time:

Article II, Section 26 of the 1987 Constitution prohibits the proliferation of political dynasties, but Congress has yet to pass an implementing law.

The pending anti-dynasty bills face likely opposition in a legislature dominated by political dynasties. (READ: Only 1 in 7 lawmakers are fresh faces)

Also tackled during the committee hearing on Tuesday was Pimentel’s Senate P.S. Resolution No. 497, studying the possibility of registration and voting for overseas absentee voters (OAV) via the Internet or electronic mail. – Rappler.com