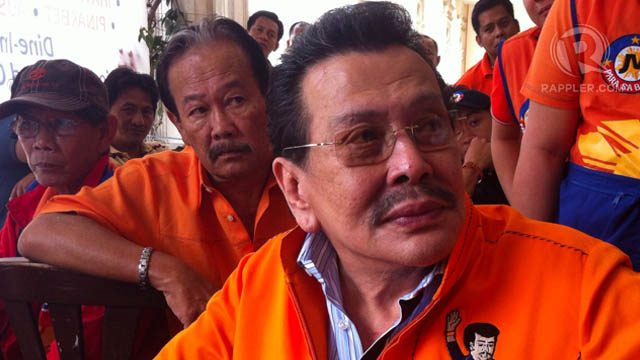 Facebook Twitter Copy URL
Copied
The SC requires all parties involved in the case to submit their memoranda detailing their arguments on the case
MANILA, Philippines – The Supreme Court is set to decide on the disqualification case against former president and now Manila mayor Joseph “Erap” Ejercito Estrada, after it treated as answers the comments Estrada filed before the High Court.
In a notice dated April 22 but released to the media Monday, May 19, the SC en banc has given due course to the petition filed by lawyer Alicia Vidal and the petition-in-intervention by Estrada’s 2013 poll rival and former Manila mayor Alfredo Lim.
Estrada filed his comment before the SC, after the Court in June 2013 ordered him to respond to Vidal’s petition seeking to disqualify him from the Manila mayoral race on the basis of his earlier conviction for plunder.
Signed by Clerk of Court Enriqueta Vidal, the April 22 SC notice also required all the parties involved in the case including the Commission on Elections (Comelec) to submit their memoranda detailing their arguments on the case.
Vidal, Lim, Estrada, and the election commission were ordered to submit their memoranda 30 days after their receipt of the SC notice.
Vidal initially filed the disqualification case against Estrada before the Comelec, which dismissed it on the basis of the executive clemency granted to Estrada by former President Gloria Arroyo. Comelec said the presidential pardon restored his right to vote and right to be voted into public office.
Estrada was ousted in 2001 following a botched impeachment trial, and he was jailed later on charges he stole millions from government coffers. The Sandiganbayan declared him guilty of plunder.
Arroyo’s pardon prompted Estrada to again run for president in 2010, and a disqualification case based on the same grounds was lodged against him then. The Supreme Court, at the time, did not act on the case.
Estrada placed 2nd to now President Benigno Aquino III during the 2010 presidential polls. – Rappler.com