Facebook Twitter Copy URL
Copied
De Lima asks the NBI to reproduce a copy of Luy's drive, ahead of her receipt of the Senate subpoena

MANILA, Philippines – Justice Secretary Leila de Lima will be complying with a Senate order requiring her to produce before the legislative chamber the digital records of pork barrel scam whistleblower Benhur Luy.

In a chance interview Thursday, May 22, De Lima said she already asked the National Bureau of Investigation (NBI) – to whom Luy’s hard disk drive was turned over in 2013 – to reproduce a copy of its contents for submission to the Senate.

(It’s  a subpoena. We need to comply… I’m asking NBI to already make a separate copy of the hard disk, because what the committee is asking is a soft copy, not the printed copy. That would really be voluminous.)

In its subpoena duces tecum issued Thursday, the Senate Blue Ribbon Committee ordered De Lima to produce “a copy of the contents of the ‘Luy hard drive’ submitted to the NBI” on or before Wednesday, May 28. De Lima has yet to receive the Senate order.

The Senate blue ribbon committee on May 15 issued the same order addressed to Luy, whose lawyers then wrote to the NBI asking the bureau to submit the drive to the committee. (READ: Luy asks NBI to submit hard drive to Senate)

(Read the letter below) 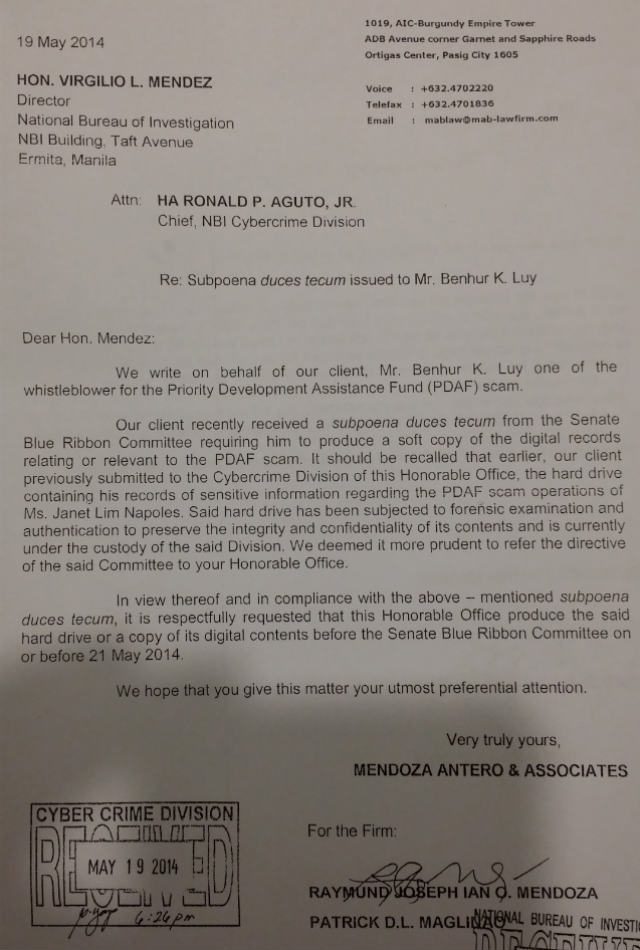 On Wednesday, May 21, De Lima said she will be seeking the guidance of the Ombudsman with regard to the Senate-issued subpoena duces tecum addressed to Luy. The Senate at the time had yet to direct the order to De Lima.

Informed about the new order addressed to her, De Lima on Thursday, May 22, clarified that seeking the Ombudsman’s guidance “is still an option” but that time constraints might prevent her from doing so.

Alleged pork barrel scam mastermind Janet Napoles and Senators Jinggoy Estrada, Bong Revilla, and Juan Ponce Enrile are all facing plunder complaints before the Ombudsman. They are part of the first batch of complaints filed by the Department of Justice. The Ombudsman is preparing to file those charges before the Sandiganbayan or the anti-graft court.

Luy’s drive is now part of the pool of evidence the NBI is working on to secure convictions in relation to the diversion of lawmakers’ Priority Development Assistance Fund (PDAF) to fake non-governmental organizations (NGOs) associated with Napoles.

De Lima said she will have to consider the Ombudsman’s advice, as she does not know if the same set of evidence is already in the hands of the Ombudsman.

Luy’s drive contains accounting records that he kept when he was an employee of JLN Corporation, owned by Napoles.

The Philippine Daily Inquirer has published a series of stories that the newspaper said, were based on this hard drive. (READ: ‘Napolist’ frenzy reignites Luy-Baligod tussle)

Luy’s records, as accessed by the Inquirer, include bank account numbers and balances spanning 10 years of JLN Corporation’s transactions.

The Inquirer said its copy of Luy’s drive contains the following: over 500 special allotment release orders (Saros) for more than 100 lawmakers, names in the guest lists for Napoles’ parties, records of Napoles’ properties and houses, remittances abroad for her daughter Jeane, payments of club shares, security and treasury bonds, and minimal tax payments.

The Senate blue ribbon committe is conducting a probe in aid of legislation into the PDAF scam.

It was Luy who first exposed the elaborate scheme of his former boss to siphon government funds, after he was rescued by NBI agents in March 2013. Luy was allegedly illegally detained by Napoles and her brother Reynald Lim in December 2012. – Rappler.com