Jun 11, 2014 2:36 PM PHT
Bea Cupin
Facebook Twitter Copy URL
Copied
The US State Department describes him as a 'key leader and financier' of the Abu Sayyaf 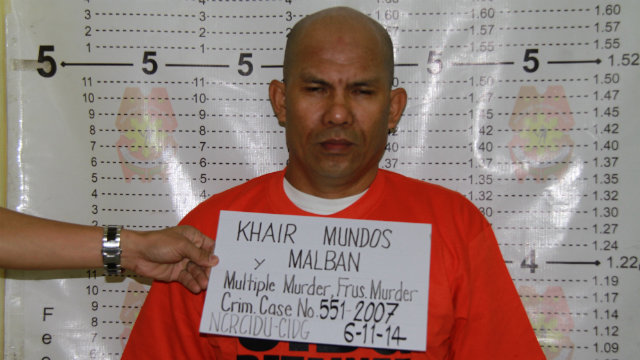 MANILA, Philippines (UPDATED) – Wanted by Philippine and US governments for being a “key leader and financier” of the Abu Sayyaf Group, Khair Mundos was nabbed by Philippine police on Wednesday, June 11.

In a statement, the Philippine National Police (PNP) said Mundos was arrested at 9:30 am on Wednesday, after an almost 7-year manhunt.

He was arrested at his in-law’s house in Parañaque City and taken to the PNP Philippine National Police (CIDG) for processing before he will be turned over to the Kidapawan Provincial Jail.

The 50-year-old Mundos was served a standing warrant of arrest for multiply murder, multiple frustrated and multiply attempted murder, as issued by a Kidapawan city jail.

The US State Department offered US$500,000 for information leading to his arrest, under its “Rewards for Justice” program.

Mundos is listed by the United States among the “most wanted” terrorists in the world. His profile on the US State Department’s website reads: “…because of his leadership position in the Abu Sayyaf Group, whose terrorist attacks have resulted in the deaths of U.S. and Filipino citizens, U.S. authorities consider Mundos to be a threat to U.S. and Filipino citizens and interests.”

This is not the first time that Mundos was jailed. In 2004, he was arrested for money laundering. The charges were the result of a joint investigation by American and Filipno officials.

Mundos escaped from the Kidapawan provincial jail in February 2007. Since then, security forces had been hunting for him in Mindanao, where the Abu Sayyaf is based.

The arrest was led by various units of the PNP including the CIDG, National Capital Region Police Office, and the Armed Forces of the Philippines’ Intelligence Security Forces. – with reports from Agence France-Presse/Rappler.com