Erice vs Tiangco: On PDAF and VP’s loyalties

Jun 13, 2014 10:05 PM PHT
Angela Casauay
Facebook Twitter Copy URL
Copied
The scent of 2016 is in the air during this face-off between Caloocan Representative Edgar Erice of the Liberal Party and Navotas Representative Toby Tiangco of the United Nationalist Alliance 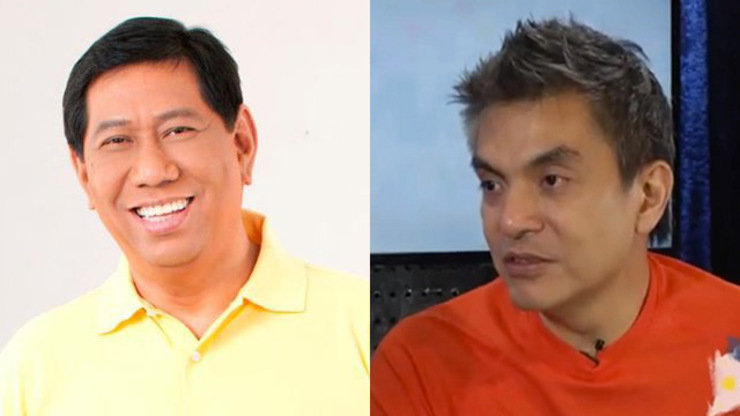 MANILA, Philippines – “You are more entertaining than other entertainers I have interviewed.”

Broadcaster Karen Davila made this remark as representatives Edgar Erice of Caloocan, a member of the administration Liberal Party (LP), and Toby Tiangco of Navotas, spokesperson of the opposition United Nationalist Alliance (UNA), faced off on Headstart on Friday, June 13.

Erice and Tiangco tried to out-talk each other in answering criticisms of their rival parties, the loyalties of Vice President Jejomar Binay, and the alleged misuse of the pork barrel of Binay’s daughter, Makati Representative Abigail Binay.

The guesting was the latest salvo in the word war that has involved the two parties.

In a fiery privilege speech delivered on Tuesday, June 10, Erice asked the elder Binay to resign from the Aquino Cabinet. He said Binay was “two-faced,” continuing to hold on his position as the head of the National Housing Authority (NHA) while failing to stop his party mates from criticizing Aquino and the LP.

The speech was triggered by alleged claims from Tiangco and Senator Nancy Binay that the LP was the source of a “white paper” that alleges anomalies in the allocation of the discretionary Priority Development Assistance Fund (PDAF) of Makati Representative Abigail Binay.

While Erice denied that the LP was behind the supposed white paper, congresswoman Binay delivered her own privilege speech on Wednesday, June 11. She belied Erice’s claims that she and Tiangco had accused LP and Malacañang of being the source of the white paper.

Vice President Binay has said he has no plans of resigning from his Cabinet post.

No permission from LP

LP and UNA may have been fierce rivals during the 2013 mid-term elections, but in the House of Representatives, both parties belong to the majority coalition.

Except for Tiangco, all 8 members of UNA in the House voted to re-elect Quezon City 4th district Representative Feliciano Belmonte Jr as Speaker of the House.

When he delivered his speech entitled “In Defense of the Grand Old Liberal Party,” Erice said he did not get permission from LP or President Benigno Aquino III to do so.

He took the initiative himself since other LP members seemed to be shying away from answering in deference to having UNA as a coalition partner in the House, Erice said.

(No one is responding, so I mustered the courage to say enough is enough. You are the ones who are doing a demolition job on us. Mar Roxas, Butch Abad, Jun Abaya, they are the subject of numerous media reports.)

One of the issues that incensed Erice was UNA’s criticism of the legality of the Department of the Interior and Local Government’s housing program for informal settlers.

UNA had said the NHA headed by Vice President Binay has the mandate to lead such projects under the law – not the DILG, which is headed by Secretary Manuel Roxas II, Binay’s perceived rival in the next presidential election.

Erice said instead of issuing critical statements, Binay should have raised this issue during Cabinet meetings since he is a Cabinet member himself, and not allow his party mates to make such criticisms.

(I don’t know what his true colors are. His right arm is wrapped around PNoy while the other is stabbing the President.)

Binay has announced his intentions to run for president in the 2016 elections. While LP has yet to make an announcement, Roxas is regarded as the likely standard bearer.

Tiangco, for his part, said he does not ask clearance from Binay on what he is going to say.

(That’s the question. If I’m the one speaking up, [Erice is saying] I need to ask clearance from Vice President Binay. But if he is the one saying something, he doesn’t need to ask for permission?) 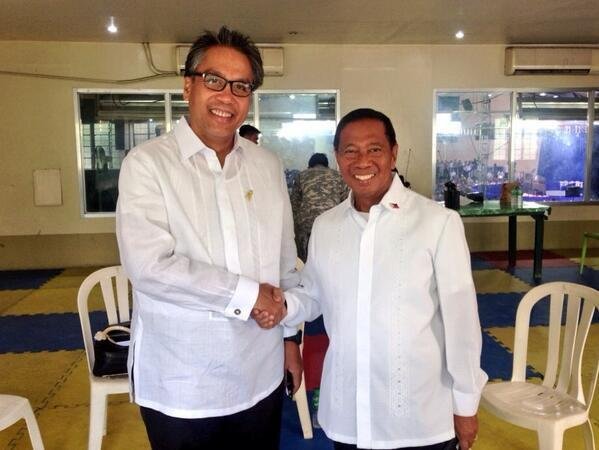 Davila asked Erice whether he believes Binay would be a good president. Erice said no.

Asked who he believes would be a good president, Erice said it’s Roxas.

Despite surveys showing that Roxas is lagging far behind Binay, Erice said he is confident Roxas can still catch up.

“I think so, the VP can be easily defeated because he has been campaigning for 4 years, no one has challenged him and yet his ratings are at 40%,” Erice said in a mix of English and Filipino.

If UNA is so sure that giving DILG the mandate to build shelters for informal settlers is illegal, they should have filed a case in court, Erice said.

Tiangco, meanwhile, dared Erice to file a case against Representative Binay for her alleged anomalous dealings. Erice said he wouldn’t.

“No. I’ll just give it to the local politicians in Makati. I have my own district to take care of. No, no. I think it’s the job of the COA (Commission on Audit),” he said.

Tiangco scored Erice for taking the issue to the media rather than interpellating Binay on the House floor.

Erice, however, said he only caught the last part of Binay’s speech.

“I was not there. Bakit mas marunong pa siya kung nasaan ako? (Why does he know my location better?)

“I only arrived during the last few paragraphs,” Erice said in a mix of English and Filipino.

Tiangco said: We can have this checked in the CCTV of Congress.

(If he did not hear the speech, he could have asked Abigail Binay: ‘Would you be willing to be interpellated, but since I did not hear your speech, may I be furnished with the transcript?’ He could have done that but he didn’t. If I ask him to file a case before COA, will he do that?))

Erice said he wants LP to break ties with UNA.

(That’s what I want because they’re hitting us left and right. Vice President Binay is rowing among two rivers, two-faced, so it is better than we know his true colors this early.)

Tiangco, meanwhile, said Erice should just ask members of the House to file a resolution kicking out UNA from the majority coalition.

Erice also slammed as mere “rumors” Tiangco’s claims that LP members had been approaching them to join UNA.

(Where did Liberal Party come from? There were only a few of them before. How did they increase if the others did not transfer from other parties?)

Erice, meanwhile, acknowledged this is the very reason why politics in the Philippines is a mess and said he is set to file a bill banning political turncoatism.

(From what I see, what’s bad in Congress is if there’s a new president, they change parties and this why our country won’t prosper.)

Congress just adjourned its 1st regular session on Wednesday, June 11. Lawmakers will report back for work in July for the President’s State of the Nation Address.

With 2016 in the horizon, the two lawmakers, as well as LP and UNA, still have 2 years to work together in the House until a new President comes along. – Rappler.com