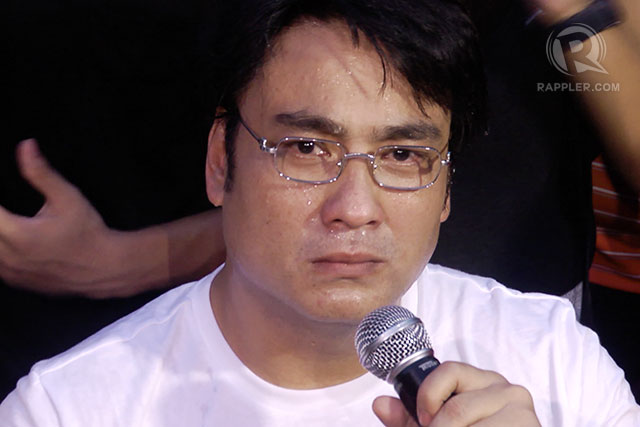 CAVITE, Philippines (UPDATED) – Surrounded by supporters at his father’s mansion in their hometown, Senator Ramon “Bong” Revilla Jr declared that he’s ready to go to jail over plunder charges, but insinuated – as he had done in the past – the administration is subjecting him to political persecution.
“Hirap na hirap na ang aking pamilya sa sobrang panggigipit. Kung anuman ang mga kaso, handa akong harapin,” he said, flanked by his wife, Bacoor congresswoman Lani Mercado-Revilla, and his children, led by his son, Cavite Vice Governor Jolo Revilla.
(My family has long suffered from tremendous oppression. Whatever the charges are, I’m ready to face them.)
The actor-turned-politician faced reporters and addressed at least 300 supporters gathered in his lawn about a couple of hours after the anti-graft court ordered his warrant of arrest prepared Thursday afternoon, June 19. 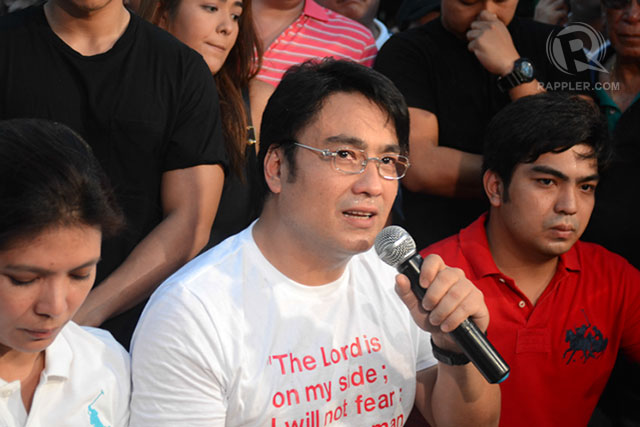 He is facing plunder and graft charges over the illegal diversion of his discretionary funds to fake non-governmental organizations controlled by Janet Lim Napoles.

Two other opposition senators, their aides, and government officials, and Napoles have also been charged with plunder and graft. The scam involved senators endorsing Napoles’ NGOs to implementing agencies as recipients of their Priority Development Assistance Fund, and allegedly got kickbacks in return.

Revilla, according to prosecutors, received the most kickback P242 million ($5.54 million)* among the 3 accused senators.

Wearing a shirt with Psalm 118:6 printed on it – “The LORD is on my side; I will not fear. What can man do to me?” – Revilla maintained his innocence, and appealed to critics to allow him to defend himself in court. 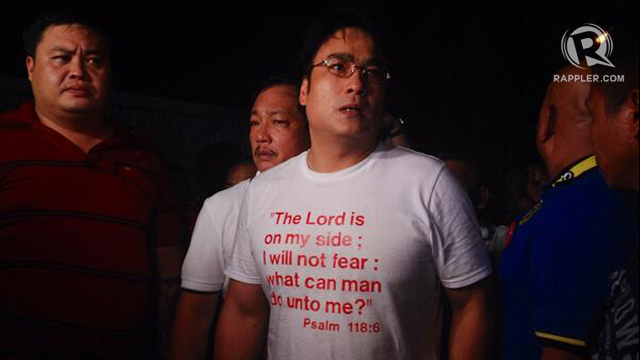 Still talking in reference to his family, he said: “Handa po akong magpakulong kahit wala akong kasalanan. Ang sa akin lamang, sana bigyan ninyo kami ng pagkakataong maipagtanggol ang sarili namin sa korte.” (I’m ready to be jailed even if I’m innocent. What I ask of you is, please give us the chance to defend ourselves before the court.)

For a moment, the senator became teary-eyed, his voice cracking.

Although Revilla’s family joined him during the rally, he was the only one who addressed the crowd.

His wife refused to speak as she held back tears when the media asked her to give a message to the public.

The elder Revilla, who is now 87 years old, spends most of his time on a wheelchair. The senator had put off telling his father about his impending arrest because of his delicate condition. Hours after his unsigned warrant of arrest was drafted and right after finishing his media interviews, Revilla informed his father, former Senator Ramon Revilla Sr, about the latest developments in an emotional encounter inside the Revilla complex.

The Sandiganbayan’s failure to sign his warrant of arrest before office closed Thursday afternoon gave Revilla’s supporters the opportunity to gather before he turns himself in on Friday. 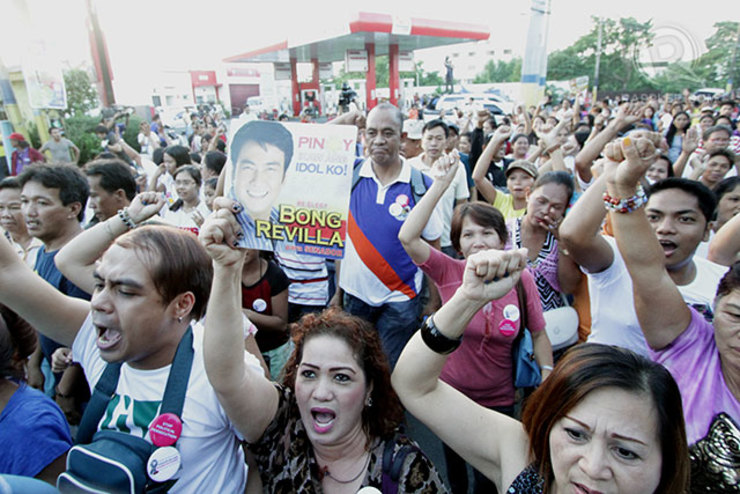 Sympathizers started arriving in small groups immediately after news broke that the Sandiganbayan has issued a resolution on probable cause for his case. When more supporters arrived, they were instructed to gather at the nearby Cavite Coliseum to avoid causing traffic.

Accompanied by a drum band, his supporters marched to the Revilla complex at around 6 pm.
Some of the hundreds of supporters that trooped to the Revilla home in Cavite will stay the night to keep the senator company.
Appeal for due process
At least twice during his press conference, he addressed President Benigno Aquino III, with whom he had traded barbs over his accusation that the administration is picking on opposition figures who are planning to run for higher office in 2016.
“Sa Pangulo, Mr President, handa po akong magpakulong. Kahit saan ninyo ako ikulong, at hindi po ako natatakot Ginoong Pangulo. Kahit saan makarating ang laban na ito, ipaglalaban ko ang aking karapatan,” Revilla said.
(To the president, Mr president, I am ready to go to jail. You can jail me anywhere, and I am not afraid Mr President. Wherever this fight may lead, I will fight for my rights.)
Outside the gate of what Caviteños call the Revilla mansion, a tarpaulin hung, saying: “Where is fairness? Where is due process? Stop all the lies! Stop trial by publicity! Stop political persecution!” At least 200 Revilla supporters lined a lane of Aguinaldo Highway, the province’s main thoroughfare. 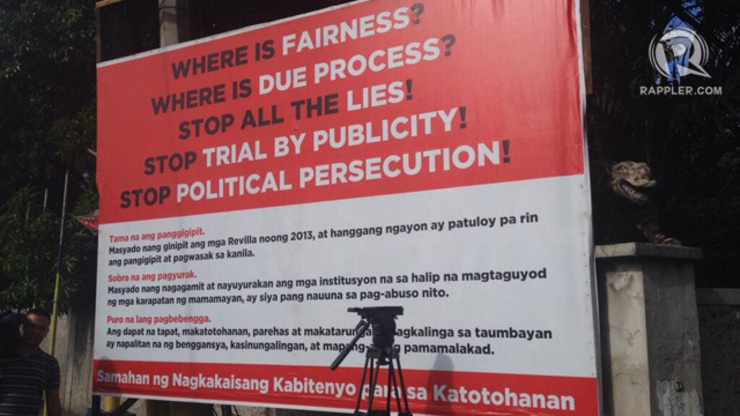 “We respect his right to express his sentiments. Our law enforcers will perform the duty assigned by the courts in accordance with law, and with due respect to the rights of concerned individuals,” said Communications Secretary Herminio Coloma Jr.

Revilla thanked supporters who welcomed him warmly the past few days, when he visited vote-rich areas in Cavite and Metro Manila. He also apologized to supporters in other provinces whom he was scheduled to visit were it not for the pending warrant arrest.