Bong Revilla off to surrender to anti-graft court

Jun 20, 2014 8:41 AM PHT
Rappler.com
Facebook Twitter Copy URL
Copied
Senator Ramon 'Bong' Revilla Jr is expected to file a petition for bail before the Sandiganbayan citing weak evidence against his involvement in the 'pork barrel' scam 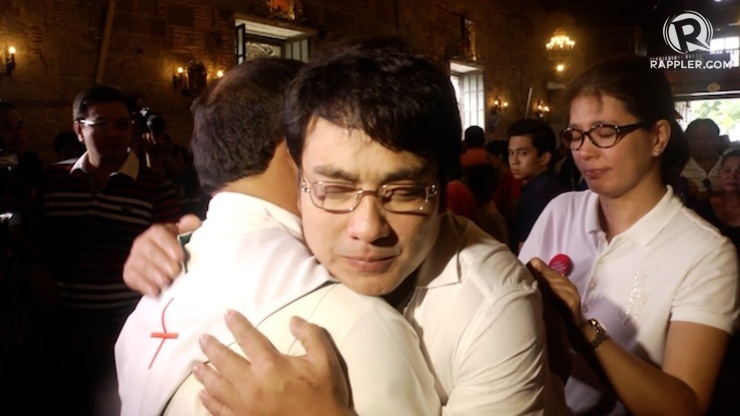 MANILA, Philippines (UPDATED) – With his family and supporters, a teary-eyed Senator Ramon “Bong” Revilla Jr headed for the Sandiganbayan at 8:40 am on Friday, June 20, hoping to beat a warrant of arrest to be issued against him by the anti-graft court’s First Division for graft and plunder charges over the “pork barrel” scam.

In a short message to his supporters before he left his residence in Bacoor, Cavite, Revilla said in Filipino, “Don’t worry, I won’t be gone. I’ll still be here and I will rise again. They may jail Bong Revilla, but they can never imprison my love for you,” as his song, “Salamat, Kaibigan (Thanks, My Friend),” played in the background.

In an interview with reporters over an hour before his departure, Revilla said he had mixed feelings about his expected detention since he was sad about his situation, but happy at the same time since he was surrounded by his loved ones – though all grieving about his impending departure.

“I said last night, ‘I have so many visitors; it seems like my wake. I would be buried  alive tomorrow.’ So this is what it would look like when I die,” he said in Filipino.

Revilla said he had only two hours of sleep and barely ate anything the night before. He brought only one suitcase with him.

The senator was prayed over by a pastor before he and his family and supporters left the Revilla residence. They were scheduled to drop by Bacoor Church before proceeding to the Sandiganbayan.

In an interview with DZMM before he left his residence, Revilla remained unapologetic about the charges leveled against him, insisting on his innocence. (READ: Did Senator Revilla lie?)

The senator is facing plunder and graft charges over allegations he pocketed millions of taxpayers’ money meant for development projects and which was coursed through his office. Revilla faces 16 counts of graft involving a total of P517 million along with his chief political staff Richard Cambe, Napoles, and Napoles’ driver-bodyguard John Raymond de Asis.

Revilla’s ties with Napoles could not be denied as photos that showed him attending parties she hosted could not possibly lie. (READ: Bong Revilla’s biggest battle)

Besides, his son Leonard Bryan Bautista, known in showbiz circles as Bryan Revilla, is a business associate of Janet’s son, James Christopher. The two are said to have known each other from their high school days. (READ: Napoles, Revilla sons are business partners)

Revilla said the public act of contrition demanded by the Catholic Bishops Conference of the Philippines (CBCP) from the 3 senators indicted in the scam is like deeming all of them guilty before they could even be tried. 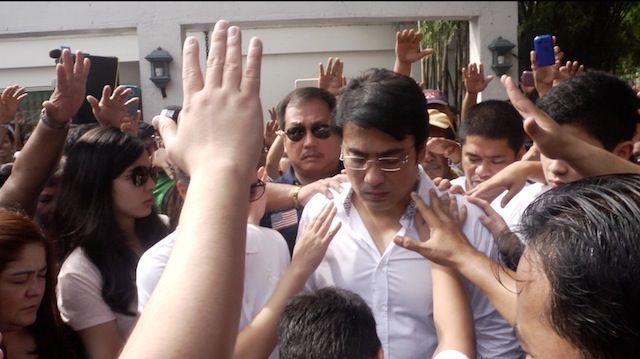 In an interview with ANC, Revilla’s lawyer Joel Bodegon said since Revilla was to have voluntarily gone to the Sandiganbayan even before it issued the arrest order against him, then it would no longer be necessary to issue and implement it. (The Sandiganbayan issued the warrant of arrest as Revilla left his house.)

He added, “If the Sandiganbayan issues a warrant of arrest, if the accused voluntarily submits to court jurisdiction, it should not be implemented.”

The lawyer said he will file a motion that morning expressing Revilla’s preference to be detained at the Philippine National Police (PNP) Custodial Center in Camp Crame, adding that the senator had discussed the matter with PNP Chief Alan Purisima.

Bodegon also said that Revilla will file a petition for bail so he can discharge his functions as a senator while in detention.

“That is our next move. Also this morning, we will file a petition for bail. This is because the evidence of the prosecution is weak. In non-bailable offenses, you have to file petition  a for bail…for the court to determine if the evidence is strong or not. If it’s not strong enough, the court will grant bail for the provisional liberty of Senator Bong Revilla,” he said. – with reports from Angela Casauay/Rappler.com