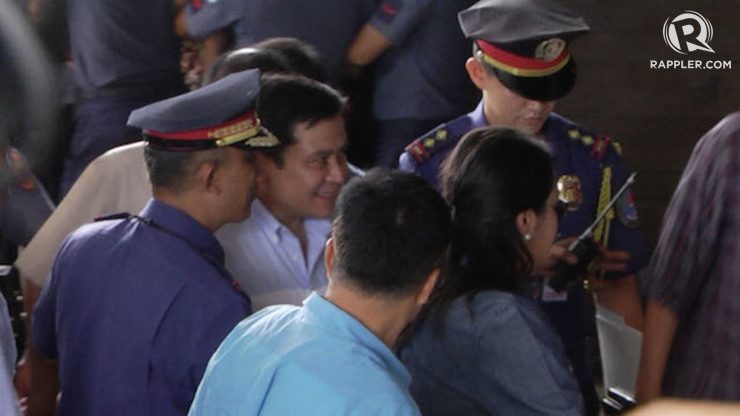 Facebook Twitter Copy URL
Copied
(UPDATED) Even as he surrendered to authorities, Senator Estrada asks the court for temporary liberty

MANILA, Philippines (UPDATED) – While already at Camp Crame after surrendering to authorities, Senator Jose “Jinggoy” Estrada on Monday afternoon, June 23, pleaded before the anti-graft court Sandiganbayan to be allowed to post bail for his temporary liberty.

In a 10-page motion for bail, Estrada argued that he is not a flight risk. “The possibility of him escaping, bearing in mind his official and social standing and his other personal circumstance, is remote, if not nil,” the motion read.

The senator is facing plunder and graft charges before the 5th division. Plunder is typically a non-bailable offense.

Estrada argued however that the Ombudsman has no strong evidence of guilt against him.

Estrada added that his voluntary surrender indicates he is ready to face his charges before the court.

He further argued that there is no actual proof that he amassed ill-gotten wealth, taking a swipe against what he regarded as “hearsay” testimony of prosecution witnesses.

“Significantly, Benhur Luy and Merlina Sunas categorically admitted that there was no occasion that any of them delivered or that Senator Estrada received from either of them any amount of money,” his motion read.

On Monday morning, the Sandiganbayan’s 5th division ordered the senator’s arrest after it found probable cause to try him in court. – Rappler.com