Lechons and mudbaths at Feast of St John the Baptist Facebook Twitter Copy URL
Copied
Whole roasted pigs are dressed like people, while locals cover themselves with mud as an act of humility at the religious festival
BATANGAS, Philippines—Roast pigs decked out as superheroes and mud-coated farmers paraded in separate Philippine villages Tuesday in two of the mainly Catholic nation’s most colorful religious festivals.

Several thousand revelers marched behind mini-trucks carrying roasted hogs through the town of Balayan, with bystanders periodically dousing the raucous procession with buckets of water.

“In the old days these processions were not as fabulous as the ones that we have now,” pensioner Teresita Francisco, 60, told Agence France-Presse after watching the start of the parade from her front yard.

The procession is a post-harvest agricultural rite featuring the lechon, a whole pig roasted on a spit over charcoal that is one of the country’s most popular special dishes.

It is held in honor of Saint John the Baptist, whom Christians say baptized Jesus Christ on the banks of the Jordan river. This year’s 3-hour parade through Balayan, a coastal town in Batangas province south of Manila, featured about a hundred roasted pigs in gaudy outfits.

They were kitted out in a Spiderman suit, boxing trunks and gloves, as a doctor and as a Red Cross rescuer on a boat. Another hog was mounted atop a motorcycle.

The pigs, which cost about P3,500 ($80) each, are consumed communally after the parade. 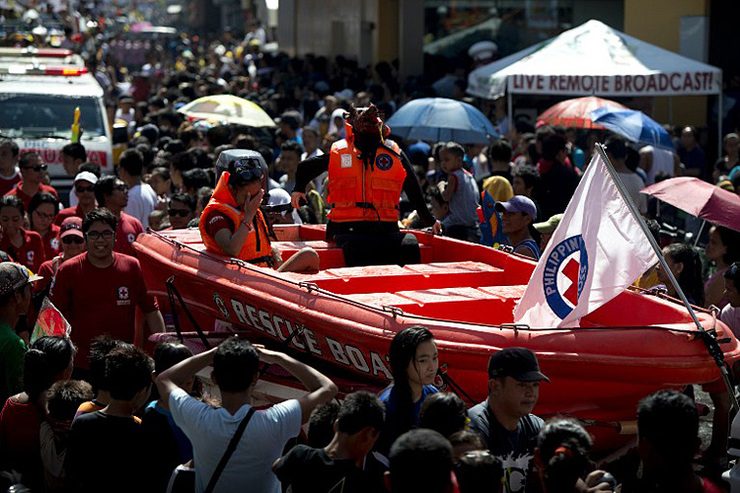 Big corporations as well as thousands of tourists also took part in the parade, with corporate sponsors handing out free liquor, beer and candies.

Telephone repair man Leon Sara, 28, splashed water at revelers as they passed, a traditional Filipino custom during the feast day. “I doused a uniformed policeman earlier. He wasn’t too upset about it because he knows it’s the custom here,” Sara told AFP. The saint was also honored in another unique procession Tuesday in the remote farming village of Bibiclat 110 kilometers (68 miles) north of Manila.

Following annual tradition, about 200 men and women trooped to nearby rice fields at daybreak, cast off their outer clothing and rubbed mud all over their faces and bodies before donning cloaks made from torn-up banana leaves.

They then walked barefoot down the main street, accepting candles and alms offered by residents on the way to the local church for a thanksgiving mass.

Religious devotees take part in the procession as an act of humility and penance, imitating a saint who preached and lived in poverty in the desert. – Rappler.com