There were 298 people, including 154 Dutch nationals, on board the Malaysia Airlines flight that US officials said was shot down by a surface-to-air missile and crashed in strife-torn eastern Ukraine on Thursday, July 17.

Their identities were not immediately released.

“There were 283 passengers and 15 crew members on board the plane,” Huib Gorter told reporters at a press conference at Amsterdam’s Schiphol airport from where the doomed flight had taken off.

He gave a preliminary breakdown of the passenger’s nationalities, saying: “154 were Dutch, 27 were Australian.” In addition to the 3 Filipinos, 43 others were from Malaysia, 12 were Indonesian, 9 were British, four were German, another four were from Belgium and one was Canadian.

We are in the process of notifying #MH17 next-of-kin. Once all have been notified, the passenger's manifest will be released.

Took off from Schiphol

Air traffic control lost contact with the Boeing 777-400 around 14:15 (12:15 GMT) near the Russian-Ukrainian border, the Malaysia Airlines official said.

Flight MH17 took off from Schiphol shortly after noon and was supposed to land in Kuala Lumpur at around 06:10 am local time, Gorter said.

Another airplane will be made available to grieving relatives wanting to visit the crash site, Gorter said.

Questioned about the cause of the plane crash, Gorter said: “At this stage we are still looking at it from the viewpoint of being an accident.” 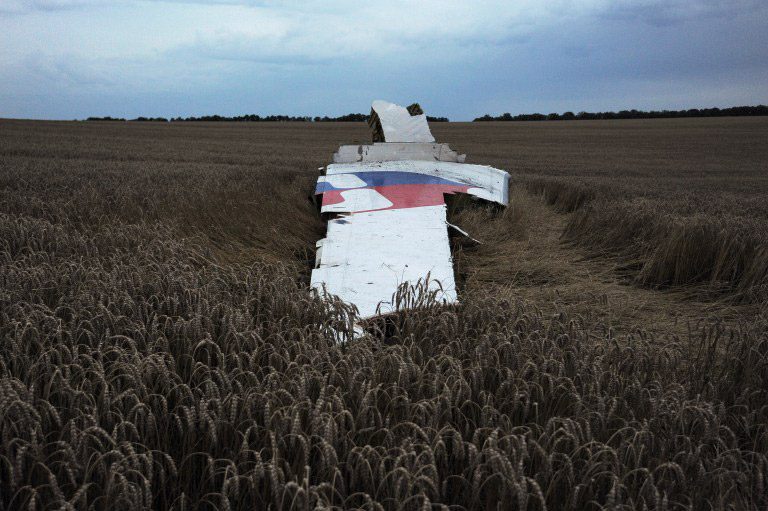 Earlier, shocked and crying relatives were shielded from the press as they arrived at Schiphol to be taken to a special gathering area.

They were later escorted from the airport and taken by bus to an undetermined destination, Dutch news agency ANP reported.

The crash is the Netherlands’ second-largest air disaster to date.

The country’s largest disaster happened in March 1977 when 238 Dutch citizens died in Tenerife when two Boeing 747s crashed with the loss of 582 lives.