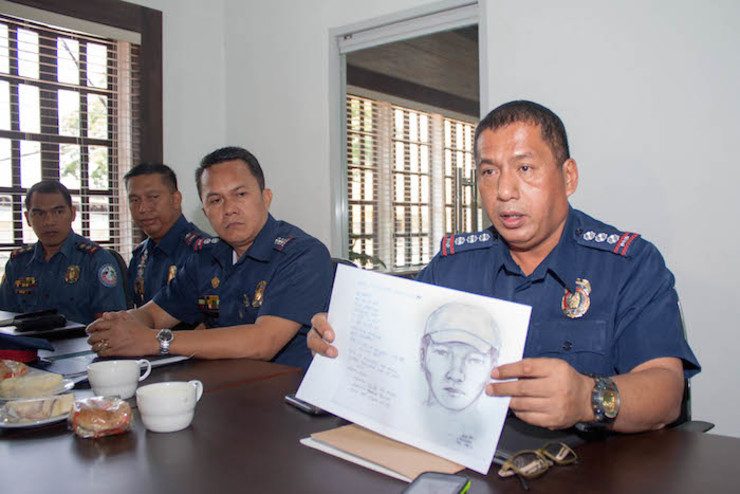 The armed robbers struck the M. Lhuillier branch at around 7:10 pm, using hammers and grips bought from a nearby hardware store to smash glass cases displaying jewelry, in what is said to be the biggest and most daring heist to take place in the city.

Cagayan de Oro City Police director Senior Superintendent Graciano Mijares said that after the suspects were done, one of them struck a security guard, 45-year-old Ellah Solaron, lacerating her temple.

The group also took with them the lady guard’s service firearms, and the shotgun of a security guard on duty at the parking lot.

Mijares said based on the close circuit television (CCTV) footage, “4 suspects went inside the M.Lhuillier, two were outside the door, another suspect disarmed the guards on the West entrance, another suspect as waiting outside their getaway motorcycle.”

He added that the suspects were armed with .45 and 9mm caliber pistols, and had been in the mall as early as 4 pm, based on their transaction receipt from Ace Hardware.

“The pattern of the robbery is the same as that of what took place in Manila, even the time of the attack,” Mijares said. (READ: ‘Martilyo gang’ escapes through crowd after SM mall robbery)

He could not confirm, however,  if the CDO robbers are affiliated with the same Manila-based gang.

Mijares also dismissed reports that the robbers had carted away more than P5 million ($115,547*) worth of jewelry, as the inventory of the stolen merchandise has not been completed.

Mijares believed that the robbers could still be in the city, cooling down.

The city’s 5 major exit points and entry points city have been under full alert as a cartographic sketch of one of the suspects was released Wednesday morning.

Cagayan de Oro City Mayor Oscar Moreno ordered the speedy arrest of the suspects, while other city officials assured the residents that the city is safe.

The National Bureau of Investigation, the Philippine Army, the Criminal Investigation Detection Group and other government security agencies were briefed on the robbery on Wednesday, July 22. – Rappler.com