Jul 28, 2014 10:52 AM PHT
Facebook Twitter Copy URL
Copied
President Benigno Aquino III says his administration has released more than P40 billion to modernize the military, the bulk of which goes to the Navy 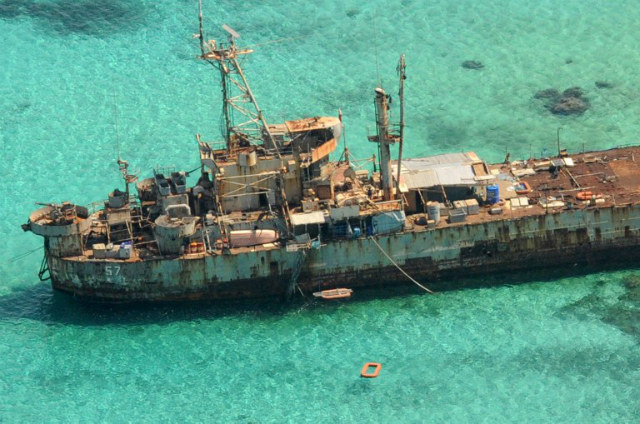 He and the troops also had a good laugh as he recalled a time he was aboard a battleship and rust icicles fell on their beddings after it participated in a naval gunfire exercise that shook the vessel.

These jokes are a thing of the past, the new chief of the Armed Forces of the Philippines assured the Navy. “We will have in the future a very strong naval presence. We will have strong navy that will be a source of national pride. Babalik ang Golden Days (Our Golden Days will come back),” he told the troops.

President Benigno Aquino III allocated fresh funds of P85.3 billion (about $1.9B) for the first 5 years of the Revised AFP modernization program under Republic Act 10349. The leading force in territorial defense, the Navy and the Air Force are getting big chunks of the funding.

This is on top of other allocations including shares from the Malampaya funds and Malacañang’s Disbursement Acceleration Program (DAP) before the Supreme Court limited the use of these funds. Some “small item” modernization projects are now in limbo because of the High Court ruling, however.

The Philippine Navy of the 60s was one of the best equipped navies in Southeast Asia. The presence US military bases then also meant additional resources. But communist insurgency soon forced the military to focus on internal security, and the eventual withdrawal of the Americans in 1992 meant the Philippine Navy was on its own.

“We are getting closer to our desired state in terms of capability and readiness with our recent acquisitions, and those we are expecting to be delivered in the next few months,” said Defense Secretary Voltaire Gazmin said in a statement.

The Navy’s twin Del Pilar class cutters from the US – currently the Navy’s most capable ships – are already working together patrolling the West Philippines Sea in tandem with brand new naval choppers from Italy. More naval choppers are arriving next year, 2015. 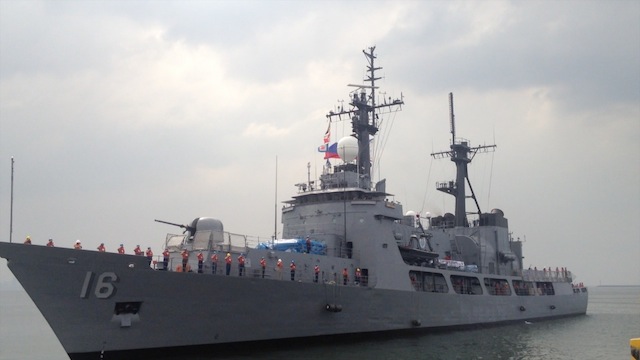 These warships will be dwarfed by the 2 Strategic Sea Lift Vessels (SSV) that Indonesian shipbuilder PT PAL are building for the Navy for P4 billion ($93 million). The contract for the ships that will be 2-3 times the size of the Del Pilar cutters was signed in mid-July.

Navy chief Vice Admiral Jesus Millan said the first SSV will arrive in 2016, before Aquino finishes his term. SSVs are a multi-purpose ship that can carry a battalion size of troops and can carry landing craft utility. It has a helipad and a hangarage for helicopters.

“It can be used to transport troops. It can be used for sea basing and it can support HADR (Humanitarian Assistance and Disaster Response) operations similar to the aftermath of typhoon Yolanda (Haiyan),” explained Millan.

Bidding for what would be the Navy’s biggest ships is yet to be completed. The Navy is acquiring 2 brand new frigates, one of the big-ticket items in the modernization program of the military. It has an allocation of P18 billion ($418 million).

The other big-ticket item is the procurement of a squadron of fighter jets for the Philippine Air Force worth P18.9 billion ($440 million). The first 2 units of the FA-50 lead in fighter trainer from South Korea are arriving next year, along with attack helicopters, combat utility helicopters, light lift and medium lift aircrafts.

The Army is getting a smaller chunk of the modernization budget but it is getting armored vehicles and new assault rifles. In a meeting last week, Catapang assured Millan that he will continue the plans laid out by his predecssor General Emmanuel Bautista. But the two leaders recognize that the Navy cannot have everything it needs because of budget constraints.

“Though we would like, of course, to have the capabilities na maganda para sa (for the improvement of the) Philippine Navy, there are some challenges because of some resources that would support these initiatives. Alam naman natin ‘yun. This would compete with othe requirements of other agencies like education,” said Millan.

The navy chief also admitted that they are suffering from the SC temporary restraining order on the Malampaya funds and they are hoping it can be lifted for the projects of the Navy. (READ: COA to military: Return P61 million in Malampaya funds)

“This is part of the process. We are all waiting,” said Millan.

The Armed Forces is also awaiting SC ruling on Enhanced Defense Cooperation Agreement (EDCA), a new cooperation agreement between the Philippines and the US. Critics questioned its constitutionality before the before High Court. It was also cited as a ground in an impeachment complaint against Aquino.

EDCA expands cooperation between Philippines and US militaries through the construction or upgrade of military facilities, and storage and prepositioning of defense equipment and supplies in “agreed locations.” (READ: EDCA to boost defense posture, allow new joint activities and What is EDCA? Look at Zambo’s PH-US joint operations)

The Mutual Defense Board-Security Engage Board (MDB-SEB), co-chaired by AFP chief and the chief of the US Pacific Command, are scheduled to meet in October to discuss the implementation of EDCA.

“It’s really urgent. It should be implemented as soon as possible,” said Catapang. He said he also supports his predecessor’s recommendation to offer the Americans the bases in Fort Magsaysay, Subic, and Palawan. (READ: How far will the US go to defend the Philippines)

Catapang assumed command of the military as it shifts focus from insurgency to territorial defense. He may belong to the Army but Catapang said the new challenges that the military is facing should mean that the next military chiefs should already come from the Navy or the Air Force.

“I foresee that the future chiefs of staff will be coming from the Navy and also the Air Force. The Army will be focused on climate change, global warming, and the typhoons. We will be the first line of defense for the climate change,” said Catapang. – Rappler.com