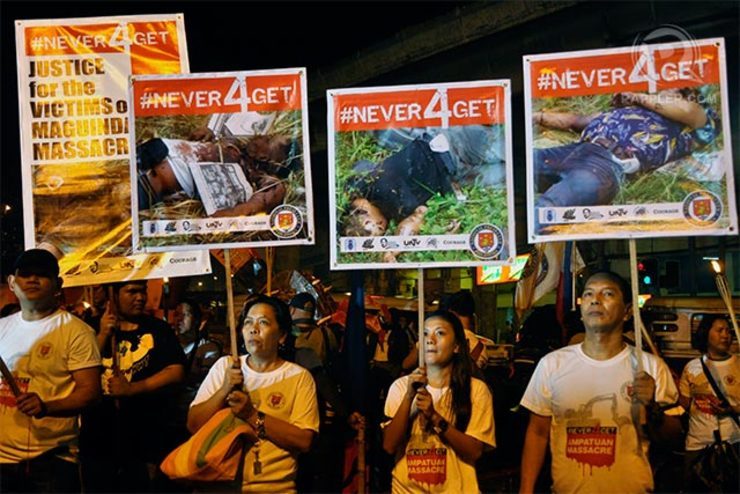 MANILA, Philippines – Public prosecutors are pushing through with their plans to rest their case against primary suspect Andal “Unsay” Ampatuan Jr and 27 others in the most gruesome massacre committed in the Philippines in recent history.

They are doing this despite opposition from two private lawyers, who said that doing so would prevent the prosecution from filing further evidence in the Maguindanao Massacre, which left 58 dead, including 32 journalists, and could lead to mistrial.

Justice Undersecretary Francisco Baraan III said the prosecution team is taking advantage of new guidelines issued by the Supreme Court that could allow separate trials for other cases.

“As far as we are concerned, it is a very sound strategy. That’s their (private lawyers) own opinion on the issue. You have already stated your piece, but our decision is to continue resting the case,” Baraan said in a press conference Friday, August 1.

The rift between private lawyers Nena Santos and Prima Quinsayas on one side, and public prosecutors on the other, has reached fever pitch over differences on how to handle the case.

Santos represents 27 Ampatuan Massacre victims, including Maguindanao Governor Esmael Mangudadatu, whose wife Genalyn died in the massacre. Quinsayas is the legal counsel of the Freedom Fund for Filipino Journalists, which represents 17 media victims.

Both Santos and Quinsayas said the prosecution team should rest their case only after the bail hearings have been concluded.

Baraan denied accusations made by Santos in ABS- CBN’s Bandila that he was bribed by the defense counsel, calling Santos’ statements childish, irresponsible, and malicious.

“I would say categorically that’s not true. Where she based it from, we want to know. But as far as I’m concerned, that’s totally an outlandish statement,” the justice official said.

In a press conference on Thursday, Santos and Quinsayas said public prosecutors had been keeping them out of the loop on crucial decision-making meetings, as well as the legal strategies of the prosecution. This began, they said, after Baraan had a meeting with Ampatuan counsel Sigfrid Fortun.

But Baraan maintained that public prosecutors are the main team behind the case and consultations with private lawyers are only “a matter of courtesy.”

“She can say what she wants, but she cannot insist on what she wants us to do. She cannot be like a spoiled child who will insist that we should do whatever she wants,” Baraan said.

Baraan admitted that he met with the defense counsel Fortun in his office, but insisted there was nothing irregular about the meeting.

“Attorney Fortun arrived unannounced. I came from a meeting downstairs and I was informed that Attorney Fortun was upstairs. We talked about matters other than Ampatuan. What they’re insinuating is if Attorney Fortun visits my office there is nothing else to talk about but Ampatuan. It is unfair to Fortun and unfair to me,” Baraan said.

The undersecretary said Santos’ bribery allegations  were “baseless” and “mere fabrications,” and challenged her to provide proof of her claims.

“She should have basis for what she is saying. Who is causing the problem? None of the prosecutors. What she is doing is she is putting the prosecution panel in a bad light,” Baraan said.

Meanwhile, another private lawyer, Harry Roque, who represents the families of 15 victims, denied there was a rift between private and public prosecutors.

In a blog post on Thursday, July 31, Roque said: “There’s no conflict between the public and private prosecutors in the Ampatuan massacre case. The conflict is between Attys Nena Santos and Prima Quinsayas and everyone else.” – Rappler.com