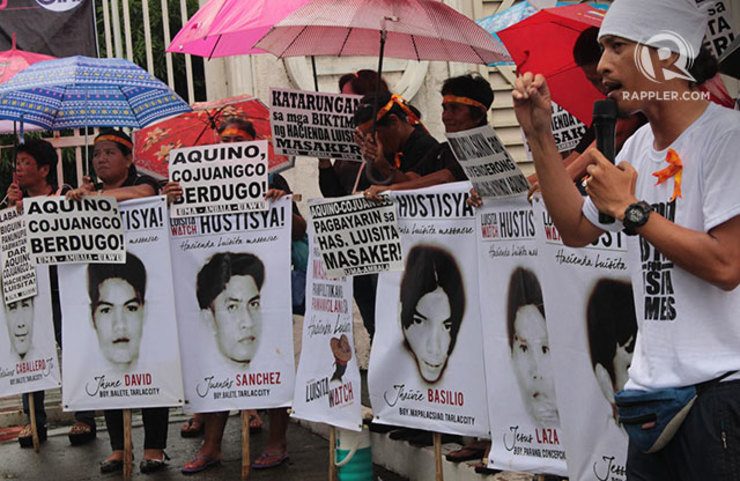 MANILA, Philippines – Almost 10 years after the Ombudsman dismissed the murder complaints against those implicated in the massacre of picketing farmers at Hacienda Luisita in Tarlac, farmers groups are seeking the reopening of the case.

The groups filed on Monday, August 4, an omnibus motion with the Ombudsman to resurrect an investigation into the criminal and administrative liabilities of certain government officials and private individuals in the 2004 violence, which saw 7 dead and 121 others injured.

The deaths and injuries stemmed from the violent dispersal of a farmers’ union’s strike done by elements of the Armed Forces of the Philippines (AFP) and the Philippine National Police (PNP).

Administrative charges including grave abuse of authority, grave misconduct, conduct unbecoming of a public official, and for violation of Republic Act 6713 or the Code of Conduct and Ethical Standards of Government Officials and Employees were likewise dismissed.

The farmers want the Ombudsman to reverse the joint order it issued in 2005 that dismissed the charges against the respondents.

In a 24-page motion lawyers from the Sentro para sa Tunay na Repormang Agraryo (SENTRA) said the complainant farmers they were representing never received a copy of the Ombudsman order through the years, so the count for when a motion for reconsideration can be filed never started.

The farmers alleged that their right to due process was violated when the National Bureau of Investigation (NBI) failed to summon them in its probe into the massacre.

The NBI probe results allegedly became the Ombudsman’s basis in dismissing the complaints against Aquino and 7 others.

The complainants before the Ombudsman include victims of the clash Gabriel Sanchez, Violeta Basilio, Luisito Versola, and Florida Sibayan. The 4 all sustained wounds during the 2004 strike.

Their original complaint was filed in January 2005 with around 48 other victims, presumably discouraged by the dismissal of the complaint 6 months after their filing.

The complainants also said the Ombudsman failed to rule on the charge for violation of Republic Act 7438 or An Act Defining Certain Rights of Persons Arrested or Detained.

The farmers said the rights of the Luisita strikers arrested by the AFP and the PNP were violated while in detention.

“During the time of their detention, they were not allowed the assistance of counsel.  They were deprived proper medical attention.  In fact, the hospital was taken over by the military.  Worst, to date, no case was filed against those who were arrested.  Thus, there was violation of their rights against unreasonable seizure,” their motion read.

The farmers said Aquino, now president, must be held liable for his actions in relation to the massacre as then congressman.

The complainants claim Aquino committed grave abuse of authority, grave misconduct, and conduct unbecoming of a public official when he “defended the military and polices (sic) violent dispersal of the striking workers, even misleading the public as to the real facts that transpired.”

Citing a November 17, 2004, privilege speech that Aquino delivered before the House of Representatives, the complainants argued that he “presented unsubstantiated and misleading facts” before Congress.

Delivered a day after the massacre, the speech allegedly discouraged Congress to conduct an inquiry into the bloody encounter.

The farmers said Aquino engaged in a cover-up when he claimed in his speech that the clash was triggered by shots fired from the ranks of the strikers.

Complainants noted that the speech was delivered “even when there was no proper and thorough investigation yet of the incident and he (Aquino) himself did not conduct any thorough and proper investigation.”

Aquino was then Deputy Speaker of the House of Representatives.

The President, however, is immune from suit during his term. – Rappler.com