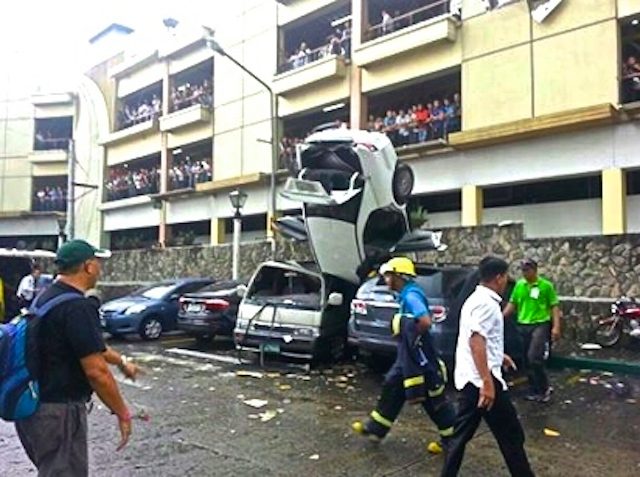 Facebook Twitter Copy URL
Copied
The 74-year-old male driver claims that he 'blacked out' during the incident
MANILA, Philippines – A 74-year-old man driving a sedan nosedived 3 storeys from a Greenhills mall carpark in San Juan, on Friday, August 15, crashing into two cars, but sustained only minor injuries.
Catherine Ko, vice president and general manager of the Shopping Center Division of  Ortigas & Company, said in an interview on ANC that the man, whose name is being withheld, is in stable condition.
“He suffered very minor injuries. He had some abrasions. But he’s okay,” said Ko.
Ko said that based on the initial account of security people at the carpark, at around 3:30 pm, the man was seen trying to back out of his parking slot but reportedly hit another car in the process.
“He probably panicked and then he drove forward again and rammed into another car. So he was going back and forth. We’re trying to determine if it was 4 or 5 cars that he hit before he rammed into the wall of the building and fell down,” she said.
The man’s Mitsubishi Galant crashed into two cars, and damaged two more at the ground level, where more cars were parked. He reportedly damaged a total of 9 vehicles that afternoon, plus the wall of the carpark which he had driven into.
Blackout or panic?
Ko said the man told mall doctors, who were the first to check him, that he had a pacemaker and that he blacked out during the incident.
She said, however, that based on eyewitness accounts of the man’s situation prior to the plunge, the man was apparently “panicking” after he bumped into several cars at the third level of the carpark, and might have accidentally stepped on the gas, causing him to breach the carpark wall.
“When our doctor was asking the driver, he said he blacked out. He probably just stepped on the gas but our doctor didn’t want to press him further because of his age and he was in a state of shock….We think that he really stepped on the gas to have that force to ram into the wall and fall down,” Ko said.
Ko called it a “freak accident” and said shopping center personnel had secured the area.
“There was substantial damage. We were not sure if something else will fall off because of damage to the wall, so we had our people take protective measures. Our main concern is to protect our shoppers, parkers and pedestrians outside,” she said.
She said the area is along Annapolis street, near the OB Montessori School.
“Suwerte na rin kasi (We can count ourselves lucky because) nobody got seriously injured in the incident,” Ko said.
Ko said the man asked for his wife to fetch him at the hospital, where he was subjected to a further check-up.
She said police authorities are investigating the incident. – Rappler.com