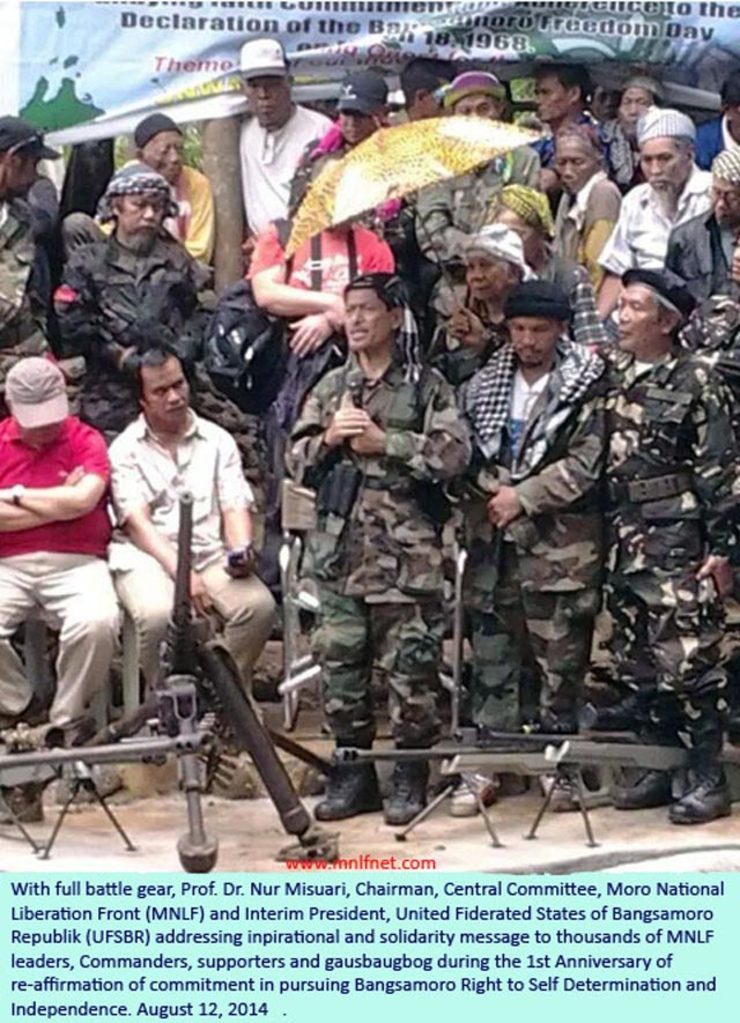 Facebook Twitter Copy URL
Copied
Nur Misuari, who is wanted for rebellion and crimes against humanity for allegedly plotting the Zamboanga siege in 2013, rallies his supporters to mark the first year anniversary of the MNLF's 'declaration of independence'

MNLF spokesman and legal counsel Emmanuel Fontanilla confirmed the gathering of rebels and supporters attended by Misuari when asked about a photo of Misuari in full battle gear, addressing MNLF members.

“Yes, the photo is genuine. It happened on August 12, in Sulu,” Fontanilla said.

In an editorial published on its official website on August 14, the MNLF mentioned the event and showed a photo of Misuari attending it.

The gathering took place a year after the MNLF faction of Misuari massed up in key cities in Mindanao in August 2013 to declare an “independent” Bangsamoro Republic. The move culminated in a September 9, 2013 bloody siege of Zamboanga City.

The caption of the photo read: “Prof. Dr. Nur Misuari, Chairman of the Central Committee,  Founding Leader of the MNLF and Commander-in-Chief of the Bangsamoro Armed Forces called for the unity of all Bangsamoro freedom fighters in pursuit of the complete independence and national self-determination of the Bangsamoro People from Philippine colonialism.”

Fontanilla refused to identify the exact location of the gathering for “security reasons” because Misuari has a standing arrest warrant for allegedly plotting the Zamboanga siege that dragged for 20 days.

Misuari and his followers face rebellion charges of rebellion and crimes against humanity in connection with the 2013 Zamboanga siege, where over 200 people were killed, including 12 civilians, and thousands displaced.

He said the MNLF is hoping that with the first public appearance of Misuari since he went into hiding, the government would drop the charges and the arrest warrant so that the issues are addressed peacefully.

“We have already abdicated the use of violence and we want to resolve this peacefully,” Fontanilla said.

The MNLF signed a peace agreement with the Ramos administration, but the group felt that the Aquino administration neglected them in favor of a rival rebel group, the Moro Islamic Liberation Front. – Rappler.com