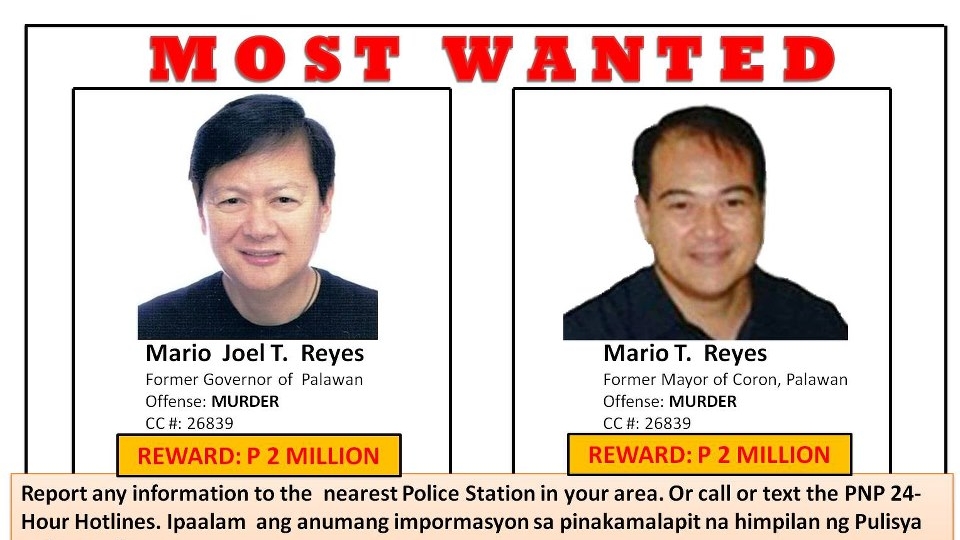 MANILA, Philippines – President Benigno Aquino IIII on Thursday, August 28, cited “developments” in the pursuit of high-profile fugitives that are hoped to lead to their arrest.

In an interview on Bombo Radyo, Aquino said authorities have reported “developments” in tracking down some of the country’s most sought-after fugitives, such as former Surigao del Norte Representative Ruben Ecleo Jr, and former Palawan officials Joel Reyes and Mario Reyes.

“There are developments but I can’t tell you what they are,” he said in Filipino. “Because if we say, ‘Your end is near,’ they might disappear again.

Ecleo was found guilty of killing his wife in 2002, while former Palawan governor Joel Reyes and his brother, former Coron Mayor Mario Reyes, are implicated in the murder of broadcast journalist Gerry Ortega in January 2011.

Aquino said authorities are pursuing other high-profile fugitives with the same resolve that led to the arrest of retired Major General Jovito Palparan. The president said there had been sightings of Palparan for a while, and it took several months of continuous surveillance before he was finally arrested on August 12.

Aquino gave assurances that the government will find the remaining fugitives.

“You can count on the fact that our successes [in that field] will continue,” he said.

The president made a similar pronouncement in March, when he said he expected the arrest of a high-profile personality. Five days later, communist leaders Benito Tiamzon and wife Wilma were nabbed in Cebu.

So far this year, law enforcers had captured two other high-profile fugitives: businessman Delfin Lee, wanted for syndicated estafa; and Palparan, who had been in hiding for 3 years after a warrant for his arrest was issued in connection with kidnapping and serious detention of UP students Sherlyn Cadapan and Karen Empeno. – Rappler.com