Former hostages: We are victims too 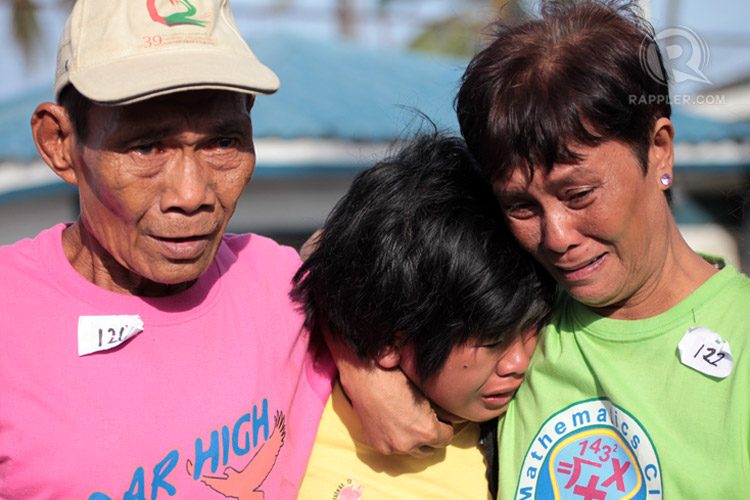 Facebook Twitter Copy URL
Copied
A year after the bloody Zamboanga City standoff, the hostages are still crying for help

ZAMBOANGA CITY, Philippines – They were given the chance to escape, were treated fairly by most of their captors, fed, and in the end released. They were never rescued. Worse, they almost died from the bullets of their supposed protectors.

On September 9, 2013, more than a hundred armed Moro National Liberation Front (MNLF) rebels swooped down on this city to declare “independence.” Their plan thwarted, the rebels engaged in a firefight with the police and military. Outnumbered and lacking firepower, they seized civilians to prevent government forces from attacking them.

Around 200 men, women, and children from the adjoining barangays of Talon-Talon, Sta Barbara and Sta Catalina were held hostage and used as human shields by the MNLF rebels. Most of them survived the bloody confrontation and this is their story:

The wound that never heals

(I can’t remember the date when we were freed by the MNLF. It was night; it was dark. We were already some distance from them and were walking in the middle of the road when we were shot at by the military. I managed to duck but my back was still hit.)

Caridad Delgado, 62, can no longer remember what transpired when she and husband Miguel, 64, were held hostage for 8 days. Caridad told Rappler that losing a house is more painful than being hit by a bullet. Today, they are living with a relative in Barangay Mercedes.

(The pain has slowly eased since we were given a coupon for construction materials. We don’t know when we would get them but hopefully as soon as possible so that we can return to Lustre, and the pain I’m feeling would finally disappear. It’s been a year.) Teodora Romero, 66, almost lost her right foot when they were fired upon by the military during their escape on the night of September 16. Her children, Kharen, 23; and Rey, 26 were likewise hit. Doctors who treated the elder Ramos gave her wound 5 days to heal; otherwise, they would be forced to amputate her.

(We were near Martha Church, running to the Scout Ranger outpost when we were suddenly shot at. We ducked, then their commander shouted, “Cease fire, hostage, positive!” Our fellow hostages also shouted, “We’re hostages!” But we were again shot upon. We decided to pretend to be dead so that they would stop shooting at us. We remained in prone position in the middle of the road, bleeding.)

She adds that when they were approached by the military, the latter pointed their guns at them and told them to crawl for 10 meters to prove that they were indeed hostages. The Romeros were living a modest life prior to September 9. They make peanut butter for a living. Now, they have no funds to continue  their business. The money they earn at present is just enough to pay for their rent, utilities, and Teodora’s health maintenance needs.

(They just gave my mother medical treatment once. When we returned for a check-up and to replace her dressing, they charged us a feww. It’s better with the ICRC. They gave us medicine including antiseptic and bandage; even the walker. They reimburse us for all of the [medicine] that we buy for Mama, until now.)

(When I tried to approach the Mayor, I was told that she was busy. When I took a peek [in the office], she was just there, having a photo opp. I never approached the government from then on.) The Romeros are grateful that all their family members survived the standoff. It’s not the same for Monica Limen, 51. She lost her only son Rubin, 20, during the first volley of gunfire from the military armoured personal carriers on September 13.

(That day, we were told to line up in the middle of Lustre. We held white flags, blankets – anything white – then we shouted, “Ceasefire!” There were MNLF who were positioned in the middle of the hostages. The soldiers showered us with bullets.)

When the smoke cleared, Monica called out to Rubin but she didn’t hear him. Turning her head back to her son’s position, Monica saw Rubin with a wound on the forehead, bloodied and lifeless. Later in the evening, after the military offensive, MNLF leader Ustadz Habier Malik asked whom among the hostages knew the place very well. The rebel leader was looking for someone who could lead them to possible escape routes. Out of frustration and growing anger against the military for shooting at them, Jojo Balaoro, 20, volunteered to help Malik and around 50 of his followers to escape.

Balaoro said the MNLF treated him like a brother, and that the rebels even trusted him with their important belongings and rifles. He was urged to join the MNLF but he declined, saying he cannot kill. “Takot nga ako pumatay ng manok, sundalo pa (I can’t kill a chicken, what more a soldier),” he recalls telling his new rebel friends whom he still remember by their names. When the military started bombarding Sta Barbara on September 15, Balaoro asked the rebels about the condition of his fellow hostages. The rebels told him they’re alright, and if he (Balaoro) wanted to rejoin them, they would escort him back to Sta Catalina.

“Sinamahan ako ng apat na MNLF na naging kaibigan ko na. Dinalhan namin yung mga hostages na nagpaiwan sa Lustre ng mga pagkain, tubig pati na sigarilyo (I was accompanied by 4 MNLF members who became my friends. We brought food, water, and even cigarettes to the hostages who remained in Lustre),” says Baloro. A few hours later, Malik returned with his men to Sta Catalina and asked the hostages why they were still around. He told them to escape.

Five months after the standoff, Balaoro received a call from one of the rebels who is also a trusted aide of Malik. The rebel thanked Balaoro for helping them and told him that Malik was alive and healthy, and that the rebel leader was also extending his appreciation. Carlos Baricua wouldn’t have been a captive if not for his son who was left behind in their house. After evacuating 13 members of his family members, he went back to Lustre to look for Jungjong, 9. When they found each other, the MNLF rebels patrolling the area didn’t allow them to leave.

Baricua and son were held hostage for 8 days. During captivity, he served as cook for the rebels. He recalls that Malik fondly calls him “idol” whenever the rebel leader asked for coffee.

Baricua admits that he has not worked as an electrician for a year. Everytime someone shouts or when he hears a loud sound caused by the banging of doors or pots and pans, he would panic and start looking for his family members. Baricua would have difficulty sleeping whenever he sees the bullet holes on the walls and roof of his house. (Everytime my father hears a jeep or helicopter, he would start shouting, ‘They’re back! Let’s hide!” He would rather stay with my sibling in Tetuan than come back to Lustre.)

The Climacos were considered by their neighbors as “house hostages” for they were never part of the group of hostages held by the MNLF. For 16 days, they hid under their dining table guarded discreetly by two rebels who gave them water and bread taken from abandoned stores. They were able to get out of their house after the military’s clearing operations. “Ceasefire, ceasefire!” shouts 3-year-old Narciso Tabios everytime he sees a helicopter in the air. Narciso was then two when hostage takers turned his 4 elder siblings and their mother into human shields.

Today, most of Narciso’s neighbors, playmates, and even siblings call him “ceasefire.” Edwin Ramos, 49, and son Edmar, 19, were the last of the hostages who left the KGK Bldg on September 17. They didn’t join those who had escaped and just waited until there were no longer any MNLF rebels around.

The house where the Ramoses used to stay was burned to the ground during the standoff. Now, Edwin can no longer rebuild the home where he was born because he lacks the papers to prove ownership of the lot. Almost all of the former hostages that Rappler talked to are seeking government support. They claim that they are not treated the same way as the evacuees.

They are still waiting for jobs, livelihood, construction materials, medicines, scholarships and even stress debriefing – things they did not ask for but were  all supposedly promised to them. It has been a year after. – Rappler.com