Sep 10, 2014 12:51 PM PHT
Rappler.com
Facebook Twitter Copy URL
Copied
'If I do not reach full recovery by December this year, I will not run for any public office. The decision to run will depend on my doctors,' Santiago tells reporters 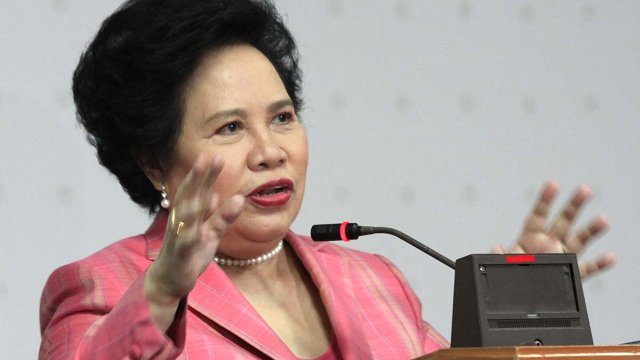 MANILA, Philippines – Senator Miriam Defensor Santiago is back with a bang, announcing that her choices for runningmate – if her health allows her to run for president in the 2016 elections – are Davao City Mayor Rodrigo Duterte, former defense secretary Gilbert “Gibo” Teodoro, and Senator Grace Poe.

She said Duterte, who is known for his iron fist leadership, would make an “excellent VP for enforcement” especially because the country is facing serious issues on graft and corruption and peace order. But Duterte was previously quoted as saying that he’s not interested in running for national office.

She said running for president is one of the 3 options she’s mulling over as she expects to fully recover from lung cancer. She ends her third term as senator in 2016.

“If I make a full recovery early enough from lung cancer, I am considering 3 options: First, to run for the presidency. Second, join the International Advisory Council of an NGO. Three, write a book in Washington DC, under a writing fellowship,” Santiago said.

She will decide in December, she said. “If I do not reach full recovery by December this year, I will not run for any public office. The decision to run will depend on my doctors,” Santiago told reporters.

She also said that reports on the pork barrel scam, the Disbursement Acceleration Program (DAP), and the alleged overpriced Makati City Hall Building 2 has convinced her that she should seek the presidency in 2016.

“Everytime I hear this news, I not only get stressed…but I also think that I should be president because it’s now so difficult to be president of this, I will describe it as a feckless or irresponsible country,” she said.

She said her latest PET CT scan shows that 80% of her cancer tumor has disappeared. “Like all cancer patients, I have my good days and bad days. On bad days, I am totally dysfunctional. On good days, I am almost normal,” she said.

In July, the senator announced that she had Stage IV lung cancer, and they she would undergo treatment that is expected to aid her full recovery. At the time, Santiago had said that she would seek the presidency in 2016 if her health would allow her.

Santiago ran for president in 1992 but lost to Fidel V. Ramos, whom she believes had cheated her of the presidency. – Carmela Fonbuena/Rappler.com