Sep 16, 2014 6:15 PM PHT
Paterno Esmaquel II
Facebook Twitter Copy URL
Copied
The EU supports the Philippines’ bid for the resolution of its South China Sea dispute under UNCLOS, even as China rejects the 'internationalization' of the maritime row 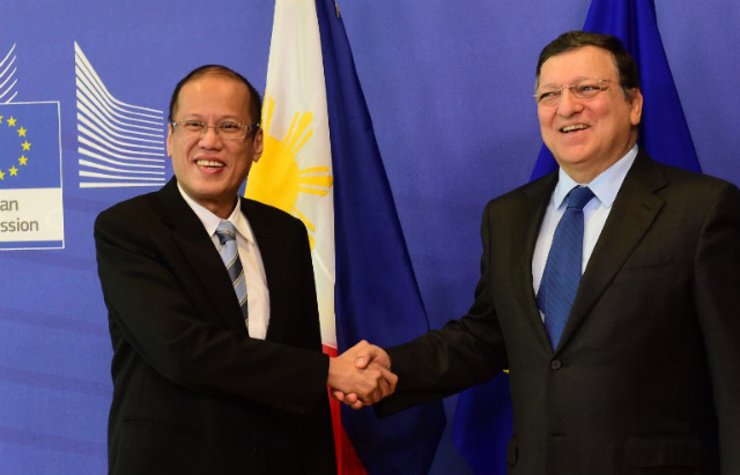 “Like the European Union, we believe that the only viable and effective solution is one that is based on international law – and in particular, under the United Nations Convention on the Law of the Sea or UNCLOS,” Aquino said in a statement at his joint press conference with Barroso at the European Commission headquarters in Brussels, Belgium, after their bilateral meeting.

Aquino added: “This is the basis for the arbitral proceedings we initiated last year. We also continue to work with ASEAN and with China towards the early conclusion of a legally binding Code of Conduct in the South China Sea.”

For his part, Barroso said at the news conference, “Let me stress that the European Union encourages all parties to seek peaceful solutions, through dialogue and cooperation, in accordance with international law – in particular with the UN Convention on the Law of the Sea.”

He added that the EU “is proud to be a party” of the Treaty of Amity and Cooperation, which aims “to settle differences by peaceful means, to renounce the threat or use of force, and to effectively cooperate among partners.”

Aquino is visiting Europe for 8 days, at a cost of P31.9 million, to boost trade and to seek support for the Philippines’ dispute with China over the West Philippine Sea.

“Europe supports us in terms of peaceful resolution of China conflict within framework of international law including arbitration,” Philippine Foreign Assistant Secretary Zenaida Collinson earlier said. “We expect these countries to uphold their positions and take into cognizance recent developments.”

China, however, has frowned upon the “internationalization” of the South China Sea dispute.

Instead, it insists on bilateral or one-on-one talks with the parties involved in the dispute, instead of a multilateral or third-party approach.

International bodies like the EU have not explicitly taken sides on the South China Sea dispute, but have stressed the need to adhere to the UNCLOS.

The Philippines argues that China’s 9-dash line, the demarcation it uses to claim virtually the entire South China Sea, violates the UNCLOS or the so-called Constitution for the Oceans. (READ: Grand theft of the global commons)

To resolve this dispute, the Southeast Asian country has filed an arbitration case against China, which the Asian giant has consistently rejected. – Rappler.com