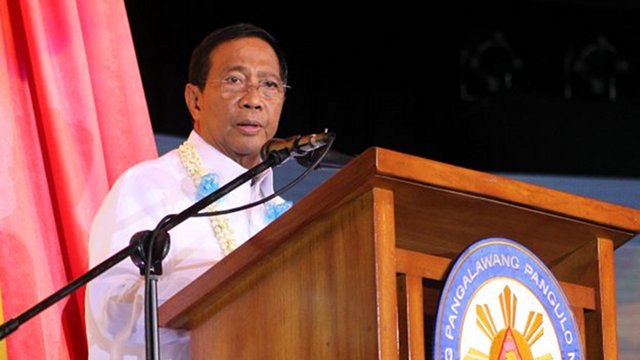 MANILA, Philippines (2nd UPDATE) – Vice President Jejomar Binay said on Thursday, September 18, that all the allegations hurled against him by his former allies in Makati City are recycled “lies” that may be acceptable to the “circus-like” Senate but will not stand up in court.

“At dahil hindi tatayo sa hukuman ng batas, ipinalalabas na lang nila sa mala-circus na padinig sa Senado (And because this would not stand up in court, they just revealed it in the circus-like Senate hearing),” he added.

The Vice President sought to refute the corruption allegations against him point-by-point and said he would not back down from any fight. But he left the PICC after the speech and let his spokespersons respond to lingering questions.

First, he maintained that the Makati City Hall Building 2 is “not overpriced.” He argued that it is incorrect to use the estimates of the National Statistics Office (NSO) on the cost of construction per square meter.

“Ang NSO mismo ang nagsabi na may limitasyon at hindi tamang batayan ang kanilang estima. Ibig sabihin ito ay hindi ebidensiya (The NSO itself said that it is right to use their estimate as a basis. This means it is not evience),” Binay said.

Binay said it should be compared instead to other government buildings such as the Iloilo International Convention Center, a known pet project of administration ally Senate President Franklin Drilon.

Drilon earlier said the Iloilo Convention Center, built as part of the Philippine hosting of the Asia-Pacific Economic Cooperation (APEC) meeting in 2015, cannot be compared to the Makati building.

Former Makati bids and awards committee vice-chair Mario Hechanova hhad testified before senators that it is “usual practice” to fix bids in Makati City. The Senate probe also revealed that while the project was divided into 5 phases, Hilmarc’s turned out to be the winning bidder in all 5 cases.

And fourth, he denied stories about supposed bags of cash used to deliver his kickbacks, allegedly 13% of the total project cost. “Gaya rin ng ibang sinasabi sa Senado, walang ring ipinakitang ebidensiya (Like many things we’ve heard in the Senate, there is no evidence to support the claim),” Binay said.

Binay claimed it took 5 years to construct the building because the city council had to look for funding. He claimed that the Commission on Audit regularly checked that the process was above board.

The Vice President also highlighted the statement of Hilmarc’s that he never asked for a commission. “Kung mayroon mang komisyon na sinasabing kinuha nang vice mayor, ito ay maliwanag na para sa kaniya lamang (If the Vice Mayor got any commission, it is clear that this is only for him),” Binay said.

The bulk of the Vice President’s speech, however, was on his apparent campaign platform for the presidency in 2016 – food on every table, a shield against rising prices, and opportunities for all, especially the poor.

He said he is ready to do for the whole country what he had done to Makati City, the premiere financial district where citizens get special perks and good public services.

The Vice President’s defense, however, did not impress his critics, among them Renato Bondal and Hechanova, who held a news briefing at a nearby restaurtant shortly after Binay’s address.

Bondal and Hechanova, who had appeared at the Senate blue ribbon sub-committee hearing on the Makati building, said Binay failed to address their allegations.

“Kung ayaw niyang umatras, mas lalong ayaw naming umatras (If he doesn’t want to back out of the fight, more so us),” Bondal said.

Bondal – who with Nicolas “Ching” Enciso VI had filed plunder charges against the Vice President and his son, Makati Mayor Junjun Binay over the alleged overpriced building – again challenged Binay to appear at the Senate hearing.”

He said since Binay is a veteran lawyer who believes he has done nothing wrong, he would have no problem defending himself from allegations at the Senate hearing, and that the people are expecting him to do this.