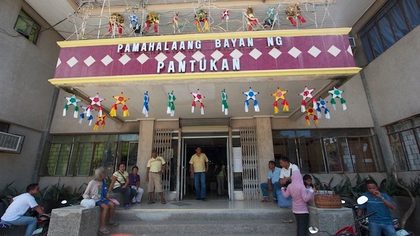 Local government and police officials said they have already counted at least 25 dead from the landslide. Residents have told various radio stations that at least 100 people are missing.

The military said at least 50 houses were destroyed by the landslide at 3 am Thursday.

Initially, police reported at least 16 casualties from the landslide, which occurred in a mining site in Barangay Napnapan, Sitios Diat 1 & 2 of Pantukan. Around 100 others are believed to have been buried in mining tunnels affected by the landslide.

Residents living near the mining sites told radio stations they didn’t observe any rains last night that could have caused the landslide. But Benito Ramos, Executive Director of the National Disaster Risk Reduction and Management Council, said an earthquake occurred in Davao Oriental, which is beside Compostela Valley, shortly past midnight of January 5.

Rappler learned from Maj. Jacob Obligado, battalion commander of the community military operations of the 10th Infantry Division, that military choppers from Cagayan de Oro City are on their way Compostela Valley to respond for possible rescue operations. DZMM also reported that the 71st Infantry Battalion has also responded to the the incident.

Environment Secretary Ramon Paje told DZMM that he has ordered immediate geological assessment of  the area because “we also do not want to endanger the rescuers.”

Paje said that the area where the landslide occurred has been identified in geohazard maps as highly susceptible to landslides. Locals have been repeatedly warned of the dangers according to Paje.

Provincial Governor Arturo Uy said there has been a ban on mining activities in the area affected by the landslide.

In April 2011, at least 26 people were reported killed when a landslide occurred also in Pantukan, Compostela Valley.

The province, where the Diwalwal gold mines is also located, thrives in small-scale mining, an industry that government has over the years failed to manage or stop. – Rappler.com