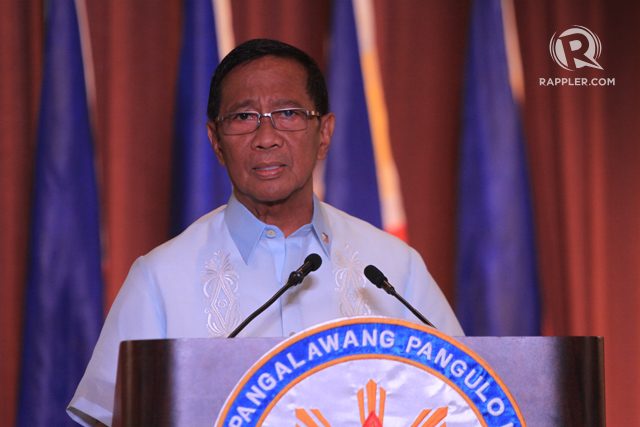 MANILA, Philippines (UPDATED) – The United Nationalist Alliance (UNA) will turn into a political party that will serve as the vehicle of Vice President Jejomar Binay for his 2016 presidential bid.

The announcement was made on Wednesday, September 24, after Binay’s meeting with close to 300 key political leaders and allies at the Century Park Hotel in Manila.

Navotas Representative Toby Tiangco told reporters that UNA, which is an alliance between the Pwersa ng Masang Pilipino of former President Joseph Estrada and Binay’s Partido Demokratiko Pilino-Lakas ng Bayan (PDP-Laban), will register as a formal political party with the Commission on Elections, carrying the same name and acronym.

Tiangco was elected interim UNA president in Wednesday’s meeting, which happened a day before the Senate is set to hold its sixth hearing on an alleged overpriced Makati “parking building,” the subject of a plunder complaint against Binay and his son, Makati Mayor Jejomar Edwin Binay, Jr. (READ: Makati building overshoots approved budget)

It was a show of force for the Vice President, the only person to have confirmed his plans to run for the presidency in 2016. On Tuesday night, Binay and his allies gathered for a fellowship event.

Binay in March announced he would be leaving PDP-Laban because of “problems in the party, especially in the leadership.” The party was co-founded by the Pimentels – Aquilino Jr and his senator-son Koko – who are now at odds with the Vice President.

UNA was formed as an alliance in 2013 for the candidates fielded and supported by Binay and Estrada. But Binay expects to expand this to include members of the Nacionalista Party, such as his spokesman Cavite Governor Jonvic Remulla, and the Nationalist People’s Coalition, such as Valenzuela Representative Sherwin Gatchalian.

(The idea of naming the party UNA came from former President Joseph Ejercito Estrada. Besides, UNA is already well-known.)

Estrada, one of the co-founders of the coalition UNA, will remain with PMP. Several prominent PMP officials such as detained Senator Juan Ponce Enrile and Jose “Jinggoy” Estrada, Jr., are still with their party, said Tiangco.

The older Estrada’s son, Senator Joseph Victor Ecerjito, will also be part of UNA but was not at the organizational meeting Wednesday. Other PMP members have the privilege of being “dual citizens” – members of both UNA and PMP. “Sa ibang partido, you have to resign. Ang pakiusap ko dito since PMP naman ang kasama namin… basta PMP member, it’s not a requirement [to resign]. Kung baga dual citizen ang PMP member,” he said Tiangco.

(In other parties, you have to resign. The compromise here is since PMP is our ally, if you’re a PMP member [and want to join UNA], it’s not a requirement to resign. PMP members are dual citizens.)

Tiangco himself has yet to leave officially PMP. While he is interim president of UNA, Tiangco is on leave-of-absence from his original party with the blessing of Estrada. But come 2016, Tiangco will run under UNA.

The event, however, is not a “launch” of the party just yet. “It’s not really a strengthening. Before we can strengthen, we have to be recognized first as a political party,” said Tiangco. Seen attending the Wednesday meeting were Senator Gregorio Honasan, Cebu Mayor Mike Rama, various mayors from the Visayas and Mindanao, particularly the Autonomous Region in Muslim Mindanao, among others.

As the interim president, Tiangco will make sure the party complies with the Commission on Election (Comelec)’s requirements in time for 2016.

“Whether we like it or not, 2016 is coming and this is why the vice president didn’t accept his nomination as party president. If there’s a Comelec hearing and there are requirements in his bid for the presidency, it will delay the party’s accreditation. The vice president will always prioritize his job, helping the poor,” said Tiangco.

Once the party is recognized by Comelec, UNA will hold another election for national officers. – Rappler.com