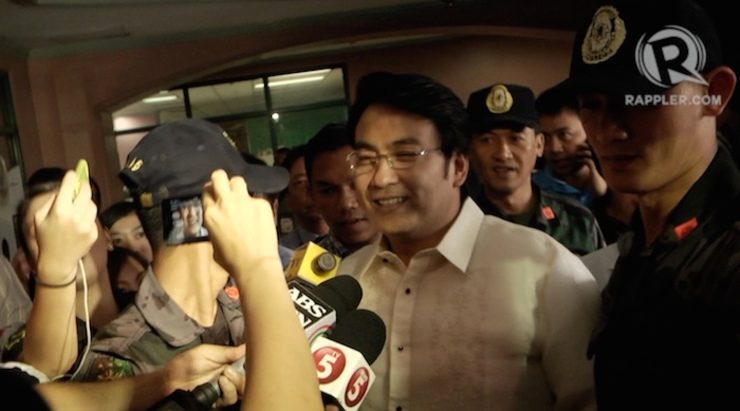 Facebook Twitter Copy URL
Copied
For now, the senator and his co-accused are allowed to copy only items that are relevant to their case, to prevent 'unnecessary leakage' and 'indiscriminate reproduction' of the drive's content

MANILA, Philippines – The anti-graft court Sandiganbayan granted detained Senator Ramon “Bong” Revilla Jr and his co-accused full access to the 500-gigabyte external hard drive of state witness Benhur Luy, but only allowed them to copy at this point select items in it.

They are allowed to copy only items that the prosecution deemed to be relevant in Revilla’s pork scam cases.

“With this and with the accused’s full access to the Hard Drive and its entire contents, short of allowing them to copy it in full to protect Luy’s privacy, the rights of the accused are deemed amply protected,” read a 7-page resolution issued Wednesday, September 23.

Such move is to prevent the “unnecessary leakage” and “indiscriminate reproduction” of the hard drive’s content.

Luy bought the white device in 2012 to save as back-up documents of his former boss Napoles.

Luy earlier said the drive also stores sensitive files that are either personal or may compromise other investigations being conducted by government, including the ongoing probe into the Malampaya Fund Scam. (READ: Luy: Limit defense’s access to my PDAF scam files)

Nonetheless, the accused are allowed to copy other items in the drive later on should they be able to prove the files’ relevancy in the pork scam cases “to the satisfaction” of the First Division.

The prosecution was ordered to prepare a full copy of the hard disk “ready and available” to Revilla and his co-accused during the trial.

Luy, who revealed both the PDAF and Malampaya scam to authorities, was the former financial officer of Napoles-owned JLN Corporation.

The bail pleas of PDAF scam accused Revilla, Cambe, and Napoles are currently being heard by the Sandiganbayan First Division. The 3 are charged with plunder and several counts of graft.

In the same resolution, the court denied Revilla’s attempt to cite Luy and the prosecution in contempt for preventing the replication of all documents in the drive.

The court on August 28 ordered the prosecution to provide a copy of the files in the device.

This was upon agreement of the prosecution. A day later, however, the representative sent by the defense teams was merely given a certification of appearance instead of a copy of the drive.

The court now resolved that Revilla’s motion to cite Luy in contempt and Cambe’s motion to have Luy explain why he should not be cited in contempt are both moot, given its ruling on the scope by which they can copy the hard disk’s content. – Rappler.com