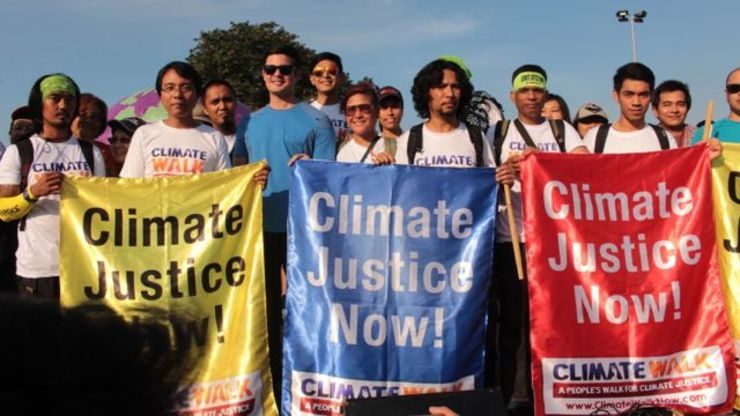 Facebook Twitter Copy URL
Copied
Climate advocates begin a 1,000-kilometer walk to 'Ground Zero' in Tacloban, in a bid to spur action against climate change – the 'defining issue of this generation'
MANILA, Philippines – After an emotional speech at a global conference and a hunger strike to pressure world leaders to act on climate change, Philippine climate change commissioner Naderev Saño is walking his talk.

For 40 days, the Philippine climate envoy will join environment groups and other volunteers on a 1,000-kilometer journey that will take them from Manila to the site of the historic landfall of the world’s strongest storm.

On Thursday, October 2, an estimated 300 activists and supporters from civil society groups gathered in Luneta Park to send off a group of walkers who would be making the long journey on foot from Kilometer 0 in Manila to Tacloban City – “ground zero” of the landfall of Typhoon Yolanda (Haiyan).

Their demand: to pressure leaders to make concrete commitments to help disaster-susceptible countries like the Philippines adapt to climate risks; to hold the world’s largest carbon emitters accountable; and to empower local communities to do their part in managing disaster risks in their areas.

The route will take participants across Metro Manila, Laguna, Batangas, Bicol, Samar, and Leyte. The march will pass through areas susceptible to disaster risks, as well as “model cities” or communities that have instituted best practices in disaster management and climate resilience. (LIVE BLOG: #ClimateWalk to Tacloban) While there have been many other marches and protests done in the past, Climate Walk 2014 comes in the middle of crucial events that have changed the course of discussions on the climate change issue.

It comes 40 days before the first anniversary of the landfall of Typhoon Haiyan, the storm that killed at least 6,000 people in Central Philippines.

It also comes more than a week after 120 world leaders gathered in New York for the United Nations (UN) Climate Change Summit, a meeting that sought to press world leaders to deliver solid commitments ahead of the expected new climate change pact to be finalized at the 21st Conference of the Parties on Climate Change in Paris in 2015.

In an interview with Rappler prior to the UN meeting, Saño said the impact of Haiyan has given the world visual proof of the suffering caused by climate change.

“Super Typhoon Haiyan, being the strongest storm ever to make landfall in modern history, has made it very easy for us to link these catastrophes, human suffering, especially with climate change. That has opened the eyes of many people around the world,” he said.

On November 8, Climate Walk participants are expected to cross San Juanico Bridge towards Tacloban City, in time to commemorate the first anniversary of Haiyan’s historic landfall.

Saño said the walk aims to pay tribute to the victims of the typhoon, and to the people confronting the devastating effects of climate change.

But aside from the symbolic solidarity with disaster survivors, the walk also aims to put a spotlight on stories of survival and resiliency.

Through social media, participants will share not only updates on their march, but also the stories of the ordinary people they encounter along the way.

It is the power of these stories from disaster survivors that Saño hopes would stir the world into action.

“People understand stories; they listen to stories. If you compare that to technical reports that are a hundred pages, people would rather hear the stories of those who experience climate change in real life,” he said.

Jeckree Mission, climate revolution advocate of the group Dakila, added that the climate march aims to transmit these stories to decision-makers.

“This is our chance to hear the voices and stories of the people affected [by climate change]. We want to share this voice. We want world leaders to hear the plight of our countrymen,” he said. Aside from expressing solidarity for disaster survivors, the climate walk has one other goal: to empower local communities and enable them to better prepare for disasters and prevent another massive humanitarian crisis in the scale of Haiyan.

Along their route, participants will distribute climate and disaster resilience toolkits to communities and towns, and hold educational events to inform citizens about the impact of climate change and what they can do about it.

While he has discussed the fight against climate change with world leaders, Saño is moving towards getting ordinary citizens to join the fight as well.

“Climate change is the defining issue of this generation. [It is] a survival issue….Other problems that we confront will be nothing compared to the issue of survival,” he said.

Saño added: “It is important for us to make people understand that climate change must be at the core of governance, at the core of what people do everyday.”

Von Hernandez, Executive Director of Greenpeace Southeast Asia, slammed the lack of concrete action from developed countries which he said were primarily responsible for much of the greenhouse gas emissions that contribute to global warming.

“After two decades of negotiations, nothing has happened. Nothing except missed targets, shameless backsliding, missed opportunities,” he said.

Hernandez added that it is time to make fossil fuel companies that “continue to use the atmosphere as a sewer for their emissions” accountable for the global problem. Along with other groups, he also called on the government to make good on its commitments and move towards creating a more climate-resilient Philippines.

Both Hernandez and Saño expressed hope that the initial show of support in Luneta would eventually snowball into a powerful grassroots social movement.

While a group of 15 walkers from various groups would be making the entire journey to Tacloban, the organizers expect more volunteers to join along the way.

Asked what message he wanted to deliver through the 40-day march, Saño said he hopes the core idea of the movement would appeal to the hearts of people around the world.

“This is a leap of faith for us, and we hold in our hearts the hope that these stories would resonate around the world and that it would speak to the hearts of people,” he said.

“Climate change cannot merely be a discussion that pertains to our minds, but it must reach the hearts of people, especially those who can change the big stuff – world leaders who can change the way we look at this problem.” – Rappler.com