Will Cambe take the fall for his senator-boss Bong Revilla? 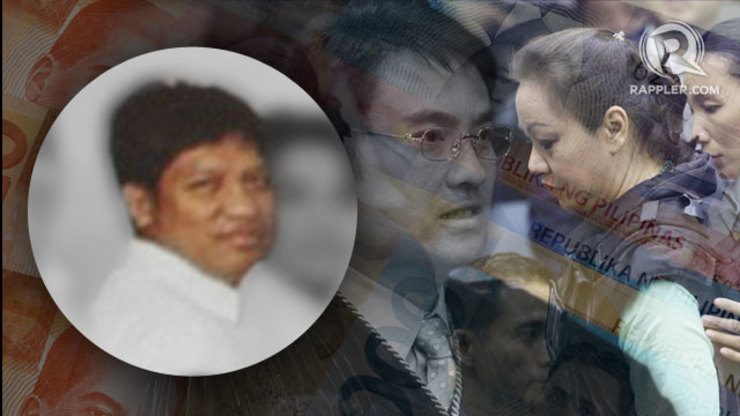 Facebook Twitter Copy URL
Copied
Unless the government can ensure their protection beyond 2016, it is unlikely for agents like Richard Cambe to turn against his long-time boss and testify for the state

MANILA, Philippines – Richard Cambe has worked in government since 1993, serving as long-time aide for Senator Ramon Revilla Sr and later on for his son Senator Ramon “Bong” Revilla Jr.

Like his younger boss, he believes the plunder and graft cases against him over a scam that defrauded the public of lawmakers’ development funds are more political than criminal.

Although he and his boss are both entangled in the scheme siphoning off millions in Priority Development Assistance Fund (PDAF) or pork barrel, Cambe receives little to no media attention.

Both have executed a waiver of appearance before the anti-graft court Sandiganbayan, forcing them to file requests for produce orders to come to court.

During Revilla’s turn, which he requested specifically to be on his 48th birthday last September 25, the senator was met by 100 supporters. (READ: Revilla to Aquino: Stop politicking, think of the country)

Sen Revilla’s supporters in front of the Sandiganbayan greet him a happy 48th birthday #Rappler pic.twitter.com/VoVqVmI89v

A week later, upon the advice of his counsel, Cambe came to court to see for himself how the proceedings went. But in his case, few noticed his presence at all.

The same was true during their voluntary surrender. Revilla’s arrival in the building caused a stir, with ceiling lights and glass cases of fire extinguishers left broken.

On the other hand, Cambe found his way in relative quiet to the court sheriff’s office with a few reporters not even noticing.

But if witnesses are to be believed, Cambe has a lot to say about the controversial multi-million-peso scam that rocked the country and created unprecedented clamor for greater transparency in the use of public funds.

He has been identified by whistleblowers led by Benhur Luy as having collected kickbacks from alleged PDAF scam mastermind Janet Napoles in behalf of his Revilla bosses. (READ: Revilla father, son transacted with Napoles – witness)

It is this positive identification that has caused many to believe he is in danger of rotting away in his detention facility inside the general police headquarters for years while his trial is ongoing – with his boss out on bail.

The same set of witnesses fell short of testifying that they saw Revilla receive dirty money from Napoles. It was always the loyal aide Cambe who received bundles of cold cash in bags, the witnesses testified.

Revilla was only ever seen attending Napoles-hosted gatherings with his wife Lani or overheard speaking with Napoles over the phone about commissions.

The court heard the witnesses’ testimonies for its assessment of whether to allow the pork scam accused to post bail for their liberty pending the resolution of the cases. The last two witnesses, one of them representing the government’s financial intelligence unit, are set to testify in the weeks ahead.

A bail plea will be granted if there is no strong evidence of guilt against the accused.

Speaking on condition of anonymity, the prosecutor told Rappler that Cambe is the one most likely to be granted bail among all the accused.

The man simply followed instructions from his boss, the government lawyer said. He was simply an agent acting based on orders upon which his job relied.

The lawyer went as far as to welcome Cambe’s cooperation by way of testifying for the state, if he so wishes. His admission as state witness will eventually be up to the court to decide, the lawyer added.

But a man like Cambe has reasons to fret over prospects for his continued detention.

If past decisions of the justices handling the pork scam cases of Revilla are any indication, Revilla and his alleged co-conspirators may be looking at an unfavorable decision.

Two justices of the Sandiganbayan First Division, which is handling Revilla’s cases, were part of the group that voted for the denial of bail prayed for by former President now Pampanga Representative Gloria Macapagal-Arroyo.

P365.9 million (around $8.13 million)* in PCSO funds were allegedly illegally amassed by then PCSO General Manager Rosario Uriarte and then PCSO chairman Sergio Valencia with the help of Arroyo and many others.

Arroyo, who was considered a co-conspirator based on her swift approvals of the requests, was not allowed to post bail and remains detained at the state-run Veterans Memorial Medical Center.

In Revilla’s case, not only did the prosecution present documents showing Revilla endorsing Napoles-controlled foundations as recipients of his PDAF. The team also had a letter from Revilla confirming that it is his signature that appears in the endorsement letters.

The Napoles-owned JLN Corporation is said to be the mother company of non-profit foundations that hosted ghost projects to corner lawmakers’ PDAF.

While none of the witnesses has seen Revilla actually accepting the money, the same is true in Arroyo’s case.

The government lawyer added that direct proof is not essential to establish conspiracy, an element of the crime of plunder. He was echoing an argument by the prosecution team in Arroyo’s case.

“Since by its nature conspiracy is planned in utmost secrecy, it can rarely be proved by direct evidence, for criminals do not write down their lawless plans and plots,” the prosecution said in Arroyo’s plunder case. (READ: Gov’t: Arroyo allowed ‘patent irregularity’ in PCSO plunder)

*Anchete, as seen on the June 2014 tweet above, should have been Ancheta. The writer regrets the error.

Lawyer Mike Ancheta, counsel for Cambe, alleged that his client was merely used as a whipping boy by the state witnesses who themselves forged signatures and fabricated documents to gain from the scam. (READ: Benhur Luy ran away with the money, says Revilla camp)

Information reached Rappler that Ancheta’s legal services are paid for by Revilla, a claim that the lawyer denied. He said his loyalty is to Cambe and is after his client’s best interest.

Ancheta maintains the prosecution has so far failed to prove the crime of plunder was committed by Revilla and his co-accused.

Plunder is a complex crime involving the illegal amassing of wealth from the government coffers by a public official in conspiracy with others. The amount involved has to be P50 million ($1.11 million)* and above.

At one point in court, Ancheta made Luy compute how much in commissions his client Cambe received from Napoles. The amount did not reach P50 million.

Prosecutors, however, dismissed the computation as irrelevant to the charge as alleged in the charge sheet.

Regardless of what Cambe received, the prosecution argued that the charge of the government involves the amassing of wealth by Revilla himself with the help of his co-accused.

The rest of them – Cambe, Napoles, and two others – merely conspired to enrich the senator. A mere co-conspirator need not receive any amount to show that plunder occurred, the prosecution argued.

Based on the charge sheet, Revilla raided the public treasury with P224 million in his PDAF.

However, defense lawyers were quick to point out the lack of an eye witness testimony from the prosecution.

With no proof so far showing Revilla received the money himself, defense lawyers argue the offense does not constitute plunder.

Defense lawyers allege that the prosecution needs to prove that the ill-gotten money went to a public official and not to Napoles or to the presidents of her dummy NGO who are private individuals.

Napoles’ lawyer Lanee Cui David doubted if the last two prosecution witnesses can tilt the debate to the prosecution’s favor. She said the representative from the Anti-Money Laundering Council can at best show movements in the bank accounts of Revilla, which are circumstantial.

In the end, of course, it is up to the court to appreciate the weight of said evidence. Regrets? Only Cambe can answer

Lawyer Dennis Buenaventura, who was Cambe’s batchmate at the San Beda College of Law, said the senator’s staff had wished he entered private practice instead.

It was one of his regrets, perhaps jokingly said, when he reunited with former San Beda batchmates now lawyering for Napoles before the Sandiganbayan. (READ: Napoles lawyers: Holy Spirit is lead counsel)

Cambe graduated with a Political Science degree from the Lyceum of the Philippines. He took up his first year of law at the San Beda College and eventually transferred to the University of the East.

Before working with government in the older Revilla’s office, Cambe worked in a Bataan fishery.

He was persistent in his dream of becoming a lawyer. In fact, Cambe did not let his initial failure in the bar examinations completely dampen his spirit.

He started as a technical staff in the office of the older Revilla, rendering unpaid work for two months from October to November 1993.

By January 1994, he became a regular employee with a monthly salary of P5,000 ($111.089)*. He rose through the ranks until becoming Director III, his present position.

At the Philippine National Police Custodial Center in Camp Crame, where Revilla and Cambe are detained, the senator still provides his aide with food every day.

Their buildings are separated by a wall, with Revilla housed together with fellow pork scam accused and opposition senator Jinggoy Estrada.

Cambe’s family – a wife and two sons still studying – mostly rely on him to sustain their needs. The family has set up a food business, which his wife Jackie manages.

At this point, Cambe has no intention of applying as a state witness. Witnesses against big-time public officials are almost always the target of a series of cases after their protection from government lapses.

Unless the government can ensure their protection beyond 2016, it is unlikely for agents like Cambe to turn against his long-time boss and testify for the state.

Cambe maintains that he was never part of the scam, that photos during birthday parties prove nothing, and that he is an innocent victim of a political smear campaign against his boss.

When the justices hand down their decision on the bail plea of Revilla, Cambe, and Napoles – an indication of things to come as the trial ensues – the public can only surmise if Cambe would change his mind by then. – Rappler.com