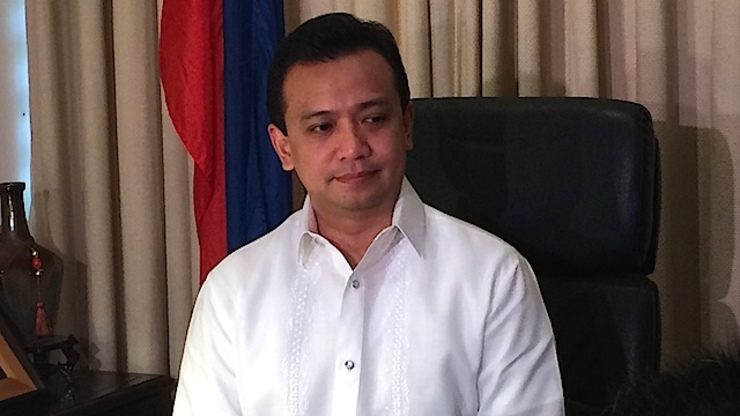 Facebook Twitter Copy URL
Copied
'If he becomes president, he might turn the entire Philippines into Hacienda Binay. It is my prayer that the Filipino people will be enlightened.'

MANILA, Philippines – Senator Antonio Trillanes IV is not hiding his bias against Vice President Jejomar Binay. The rebel-turned-senator has repeatedly declared he is convinced that Binay and his family are guilty of the corruption allegations raised against them and, thus, Binay is undeserving to become the country’s next president.

His prayer, he said, is for the Filipino voters to realize this, too.

(If he becomes president, he might turn the entire Philippines into Hacienda Binay. It is my prayer that the Filipino people will be enlightened and realize that he does not become president.)

The senator was referring to allegations that the Binays own a 350-hectare farm in Batangas through dummies, but which has been denied by the Vice President’s camp.

Watch his statement below:

(Senator Trillanes acts like he is the cleanest politician. He may appear transparent because his projects are posted in his website and he acts like he’s against ovepriced projects. It shows he is padding his PDAF projects, too),”

Trillanes explained that the multicabs were more expensive because they were customized for the particular local government units that received the donation, and additional funding was supposedly allocated for maintainance and for spare parts for a one-year-period.

“To set the record straight, I never funded overpriced projects, all the more personally gained from the different projects I funded through my Priority Development Assistance Fund. From 2011 to 2013, my office granted numerous requests from the different municipalities in the country for fund allocation for multicabs which will be used as ambulance or patrol car,” Trillanes said. – Carmela Fonbuena/Rappler.com