MANILA, Philippines – House Speaker Feliciano Belmonte Jr. will not order the automatic release of the Statement of Assets, Liabilities, and Net Worth (SALN) of all 285 district and partylist representatives.

Instead, he issued Special Order No 05-12 creating a committee that will establish review and compliance procedures relating to the SALNs of members and staff of the House of Representatives.

The committee has 3 functions: 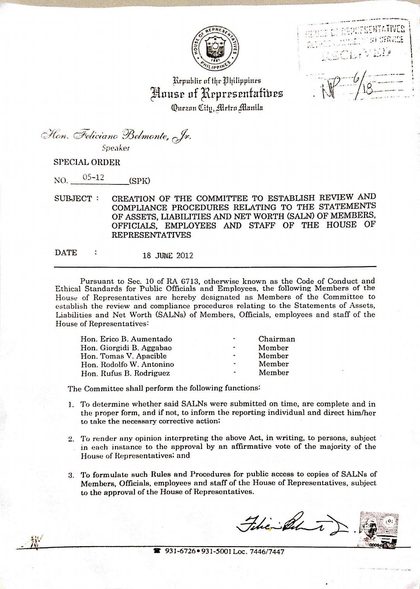 Belmonte earlier said the committee is supposed to submit its report when Congress resumes session in July. Meanwhile, Belmonte said requests for SALNs should be addressed to the individual solons.

The solons are under pressure to release their SALNs after the impeachment trial of former Chief Justice Renato Corona.

The House of Representatives impeached Corona in December 2011 for, among others, failing to accurately declares his assets in his SALN.

The House prosecution panel vowed they will release their SALNs after the trial, but so far only a few of them actually have.

Belmonte himself vowed to release his SALN, but he is yet to do so. – Rappler.com