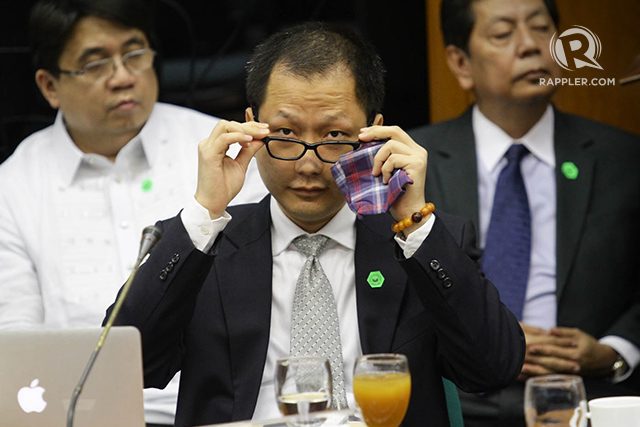 He insists he is but before a panel of senators, the businessman admitted that he doesn’t have the land titles yet. (READ: Mrs Binay’s royal taste? ‘Kew Gardens,’ aircon piggery)

Tiu also said he has only paid P11 million ($245,601*) out of the estimated P446 million ($9.96 million) value of the 150-hectare property. Despite this, he said, he has “full, enforceable right to the property” as stipulated in the contract when he purchased the property from Agrifortuna Inc, through Laureano Gregorio.

Agrifortuna is a company founded by Vice President Jejomar Binay and his wife, former Makati mayor Elenita Binay along with Gregorio and two others. The couple sold their interest in the company in 1995 but kept 9 hectares for the Vice President’s JCB Farms. Binay had said he eventually divested himself of his interest in the farm in 2010, when he was elected as vice president.

Prodded by Senator Aquilino Pimentel III to produce a transfer certificate of title to signify his purchase from Gregorio, Tiu said he could not provide it because he is not yet the owner.

But Tiu said this was how things usually worked in the agricultural sector, emphasizing that “he will be the owner” of the land.

“In our eyes, you aren’t the owner just yet,” Pimentel said in Filipino.

The grilling and prodding was done on Wednesday, October 22, at the 10th hearing for the Senate Blue Ribbon subcommittee’s probe into an alleged overpriced Makati city building.

The probe, however, has branched out into a forum for Binay’s former friends and long-time foes to accuse him of profiting from his stint as Makati mayor.

The 350-hectare “Hacienda Binay” is one of the latest exposes by former Makati vice mayor Ernesto Mercado. According to Mercado, Tiu is merely Binay’s “dummy.” (PHOTOS: Binay and wife tour guests in ‘Hacienda Binay’)

Senate Majority Leader Alan Peter Cayetano pressed Tiu to produce proof that he owns the land and asked if the sale was listed in the town’s registry of deeds. Tiu and his lawyer, Martin Subido, declined to say if it was listed or not.

Tiu claimed that since his company, Sunchamp Real Estate Development Corporation, is a publicly-listed company, he is “subject to disclosure.” An irritated Cayetano quipped that this was a “convenient excuse” for the businessman.

Still, Tiu insisted he is the owner of the property.

Pimentel, who chairs the subcommittee, interjected:

Cayetano, one of 3 senators spearheading the probe, then turned his attention on Gregorio.

According to Tiu, Gregorio had documents to prove that he had already bought the land he was selling but could not show titles. Instead, Gregorio showed Tiu tax declarations referring to the existing structures in the property.

Upon purchase, Tiu said the property already had the rest house, the pavillion, the so-called “Kew Garden” replica, and a “small zoo.”

Tiu said he was not privy to, and it is “not his habit” to check, the background of sellers – whether they are dummies or not. His concern, he said, was whether the purchase made good business sense.

Cayetano criticized Tiu for lack of “due diligence.”

Tiu’s legal counsel, Subido, also happens to be the Vice President’s lawyer and the law firm partner of the Binay’s daughter, Representative Abigail Binay. The younger Binay, however, is on-leave from the firm. It was also Subido who had brokered the deal between Gregorio and Tiu.

Daniel Subido also notarized the campaign donations of Tiu’s brother and sister-in-law to BInay’s presidential bid. All in all, James Tiu and his wife Anne Buencamino donated P15 million to Binay’s vice presidential bid in 2010.

Daniel Subido, and James Tiu and his wife are also listed as incorporators of the non-stock, non-profit Farmers Agro Forestry Workers Association.

Several lawyers with ties to Subido and the Binays are also board members of Tiu’s companies. Tiu said he nominated the lawyers as board members.

Cayetano quizzed Tiu if he didn’t find it odd that Subido, the lawyer tasked to ensure the deal to purchase the land was free from anomaly, had close ties with Gregorio through the Binays.

Subido said there was no “conflict of interest” in his situation. “Abigail [Binay] is my law partner. The Vice President is my client,” said the lawyer.

Cayetano said the ties between Tiu and Binay, and the circumstances of the Batangas deal had “elements of being a dummy.”

Senator Antonio Trillanes IV, who earlier vowed that he could prove that Tiu is Binay’s dummy, told reporters before the hearing began that the Wednesday hearing was only a “build-up” to bigger revelations.

Binay has dismissed the subcommittee as a “kangaroo court,” accusing the senators of holding it not “in aid of legislation” but to further political aspirations.

His camp also alleged that the probe, the exposes, and the plunder case filed against the Vice President and his son, Makati Mayor Jejomar Erwin Binay, are all part of “Operation Plan Stop Nognog 2016” – allegedly a scheme to ruin Binay’s chances in 2016. (READ: Binay: Roxas behind ‘Oplan Stop Nognog 2016’)

The Vice President, the only one so far to announce plans to seek the presidency in 2016, has repeatedly declined invitations to appear before the Senate panel and said he would only do so if the probe is conducted by the “mother committee” chaired by Senator Teofisto Guingona III.

On Wednesday, the Senate Blue Ribbon Committee said it would heed Binay’s condition and urged the Vice President to tell them “nothing but the truth.”

The barrage of exposes have taken its toll on Binay, whose public trust and approval ratings have slipped since the probe began, though he remains the country’s most trusted public official. He is also the leading candidate for president, according to early preference polls.