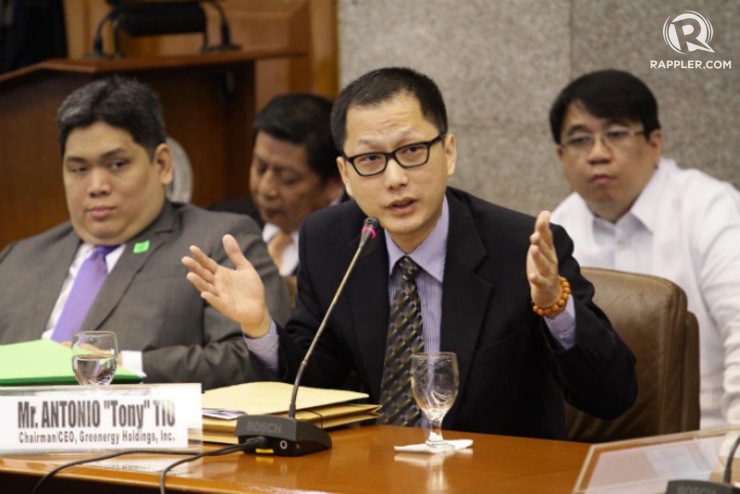 MANILA, Philippines – On top of accusations that he is acting as a front for Vice President Jejomar Binay, is businessman Antonio Tiu in danger of scrutiny from the Bureau of Internal Revenue (BIR) as well?

Internal Revenue chief Kim Henares said on Thursday, October 30, that the BIR is monitoring the Senate Blue Ribbon subcommittee hearings on the alleged overpriced Makati City Hall Building 2 but would not take any action for now to ensure a “free flowing” Senate probe.

Henares made the statement in an interview with reporters after attending the Senate hearing on Thursday, where senators questioned observed inconsistencies and irregularities in Tiu’s acquisition of a vast estate in Rosario, Batangas, worth around P446 million ($9.9 million*).

When asked by reporters, Henares said the BIR is “listening” to the hearings but stopped short of saying they would pursue an active investigation into Tiu’s possible tax fraud.

“We want the investigation to be free flowing. We don’t want to scare people away because all we want to do is to get to the truth, as far as taxation is concerned. I don’t want to say anything to frighten anyone,” said Henares.

The possibility of a BIR investigation into Tiu arose while senators grilled the businessman on details of his acquisition and ownership of the so-called “Hacienda Binay.”

Both Binay and Tiu have denied these claims. Tiu insists he owns the 145-hectare property, which he bought from Laureano Gregorio, and will be developed into the Sunchamp Agri-Tourism Farm.

On Thursday, Tiu brought with him a one-page Memorandum of Agreement between him and Gregorio, but this was dismissed by the Senate panel as insufficient to claim ownership of the property, as it was not notarized.

Although Tiu maintains that he already has “full, enforceable right to the property,” he has yet to receive any of the land titles.

An investigation by Rappler unearthed that parcels of land within the vast estate are actually owned by Binay’s friends and former aides. (READ: ‘Hacienda Binay’ under VP’s friends, aides’ names)

Aside from failing to give Tiu land titles to the property, Gregorio was also unable to give the businessman tax declarations.

During the hearing, Henares said that based on her computation, the P446-million property may have accumulated P120 million ($2.67 million) in tax deficiencies over a period of almost 20 years.

Tiu clarified that he had “no intention” to evade payment of due taxes.

“The road to hell is paved with good intentions,” Cayetano shot back.

The subcommittee’s hearings began as a probe into an alleged overpriced Makati building. It has since turned into a forum for Binay’s former allies and foes to accuse the former Makati mayor of rigging bids, getting kickbacks, and using dummies to own businesses and properties.

Binay has denied all the allegations against him, and insists the plunder charges, Senate hearings, and exposes are all part of a plot of thwart his 2016 presidential plans. – Rappler.com