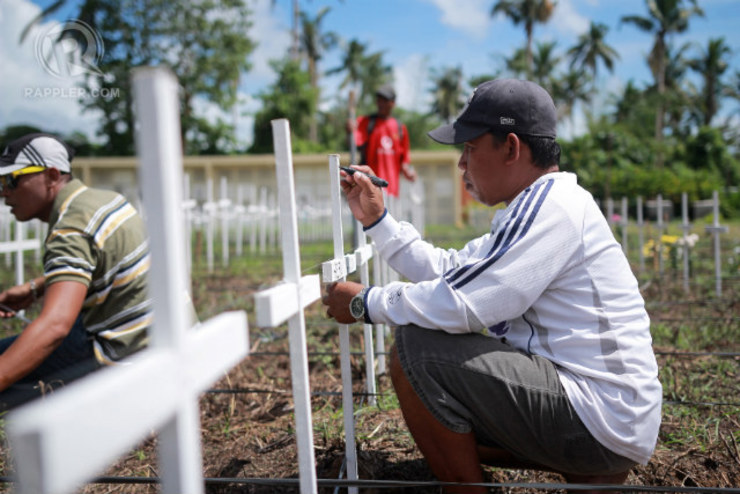 TACLOBAN CITY, Philippines – The mass grave for Super Typhoon Yolanda (Haiyan) victims turned into a field of white crosses on Saturday, November 1, as Filipinos trooped to cemeteries to pray for the dead on All Saints’ Day.

The crosses bore no names or labels, at first.

Tacloban City’s assistant administrator, Brando Bernadas, explained that the National Bureau of Investigation (NBI) has not finished tests to confirm which body is buried where. Releasing the results could take up to two years.

In an interview with Rappler, Bernadas said the crosses will serve as temporary markers where the families of Yolanda victims can light their candles, offer flowers, and pray at least on All Saints’ Day, also known as “Undas.”

For now, visitors such as Antonia Mendaza, 51, will have to pick and label random crosses in the mass grave – “first come, first served.” (READ/WATCH: Yolanda survivors pray before nameless graves)

The city government is installing 1,000 of these markers for the relatives of around 2,273 Yolanda victims in the mass grave. Bernadas said the city government will put 2,000 more crosses in the next few days.

As early as Saturday morning, at least 70 crosses have been labeled. One of these crosses bears the name, “Ismael Mendaza” – Antonia’s husband. (Watch more in the video below.)

(They said we can pick any of those crosses they’re installing. So we picked a cross and put a name on it so that the next time we return, we already know where we will visit his remains.)

Like Mendaza, 44-year-old Gil Alarcon picked a random cross in the mass grave on Saturday. “Kahit hindi ko po alam na nilibing sila diyan, nilagyan ko ng pangalan para doon na lang ako magtitirik ng kandila,” he said. (Even if I’m not sure if they’re really buried there, I placed their names so I can light a candle there.)

We first met Alarcon on Friday, and saw him dazed as he had no idea where exactly his family is buried. “Hindi ko nga alam kung saan ako magtitirik ng kandila eh.” (I don’t even know where to light a candle.)

Until early Friday evening, no cross had been installed yet at the mass grave.

Bernadas said the city government was supposed to install the crosses by November 8, the first year after Yolanda. He said Romualdez, however, saw on Friday that visitors at the mass grave seemed “directionless” in finding where exactly to pray.

Romualdez then decided to install the crosses in time for All Saints’ Day. The mayor planted the first few crosses Friday evening, Bernadas said. 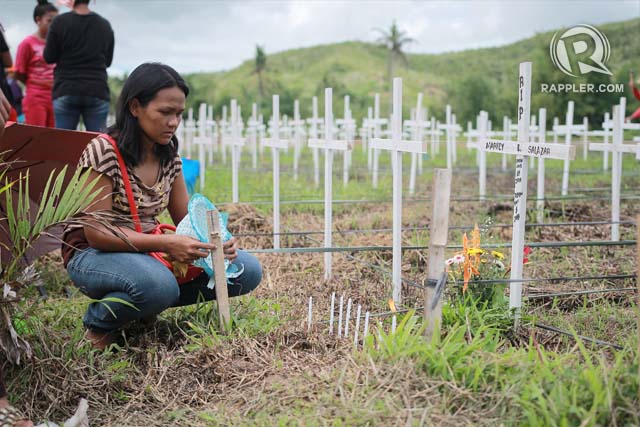 Mendaza said the city government should have properly identified the burial sites.

Alarcon, for his part, said he doesn’t want to blame the government.

“Hindi naman siguro kasalanan ng government, dahil ‘yung ibang namatayan hindi na nakapag-ano ng kanilang patay dahil sa kabuhayan nila,” he said. (I don’t think it’s the fault of the government, because many of those who lost relatives, couldn’t attend to the dead because they have to work.)

In his case, Alarcon said, he couldn’t go to the NBI and the Tacloban City Hall to check where exactly his family is buried.

Actually, however, Alarcon has nothing to check.

Bernadas said the NBI has not released the results of its DNA sampling of the Yolanda victims. This will allow the government to identify the exact burial site of each Yolanda victim in the mass grave.

Saying the city government “understands” the long process, he said the NBI needs to subject the DNA samples to a series of “cross checking” in the Philippines and overseas. The NBI could release the initial results by November 8, he said. It could also take up to two years.

“The NBI said, ‘Just be patient,’” the Tacloban official added. – with reports from Franz Lopez/Rappler.com