MANILA, Philippines – Senator Ramon “Bong” Revilla Jr on Thursday, November 6, asked the anti-graft court Sandiganbayan to allow him to undergo a medical check-up and diagnostic tests outside Camp Crame for migraine and hypertension, among others.

The prosecution team, however, suspects the timing of the request as the bail hearing for plunder charges filed against Revilla over the pork barrel scam nears its end.

Revilla’s hospital of choice is St Luke’s Medical Center in Taguig City. His lawyer, Joel Bodegon, said some equipment are not available at the hospital inside Crame where he is detained.

The original motion only requests for a one-day check up but Revilla’s legal counsel has made a manifestation before the Sandiganbayan’s First Division to amend the request to make it overnight.

The prosecution was given 5 days to submit their comment.

Lead prosecutor Joefferson Toribio told reporters the prosecution fears the move could be a prelude to hospital arrest. 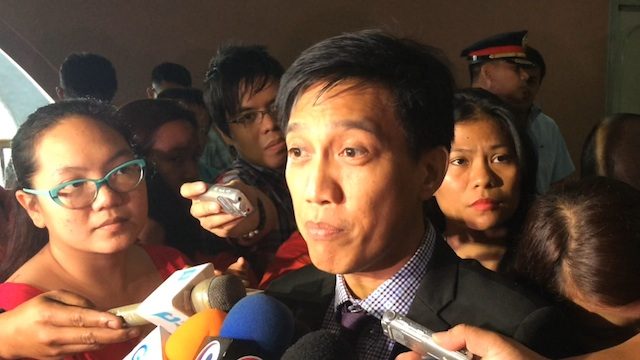 “All I’m saying is that we suspect the timing of the filing. If I’m not mistaken, Senator Revilla always says he is in tip-top shape. He always exercises. So, we are suspecting that this a prelude to hospital arrest,” Toribio said.

The hearing for Revilla’s bail petition is nearing its conclusion. National Bureau of Investigation forensic expert Joey Narciso returned to the witness stand Thursday for further cross-examination. He is the prosecution’s last witness for the bail hearing.

In a medical certificate attached to the motion, Dr Cristina Macrohon-Valdez said Revilla is suffering from migraine, hypertension, lumbar radiculopathy secondary to spondylosis or back pain and dyslipidemia or imbalance of fats.

Revilla wants to undergo an MRI (magnetic resonance imaging), a cardiac work-up and blood chemistry tests, among others.

Shortly after being detained at the Philippine National Police Custodial Center in Camp Crame, Revilla had complained of migraine due to the heat. (Revilla’s request: Air cooler in jail)

In an interview with reporters, Revilla denied he is setting the stage for a hospital arrest.

The prosecution also has a pending motion for reconsideration for its request to transfer Revilla and his chief of staff, Richard Cambe, to be transferred to a regular jail, Toribio said.

Medical tests and check up that Sen Revilla wants to undergo: pic.twitter.com/jDOMuhijwB