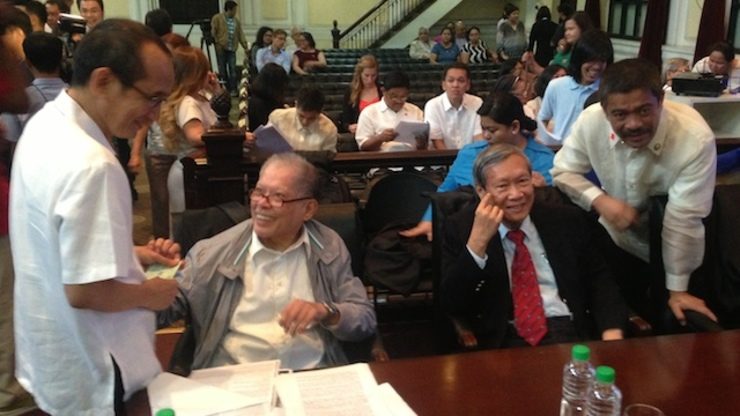 Facebook Twitter Copy URL
Copied
Supreme Court Justice Marvic Leonen says having the EDCA ratified by the Senate will satisfy a constitutional requirement, but some petitioners are after correcting provisions that are lopsided toward the Americans

MANILA, Philippines – Supreme Court Justice Marvic Leonen suggested on Tuesday, November 18, that the military agreement between the Philippines and the United States whose constitutionality is being questioned be transmitted to the Senate.

“Would it be a better part of wisdom and caution on the part of the President to transmit it now to the Senate so that the Senate, being a political body, can now take a look at the entire EDCA and keep it in tune with the provision of the Constitution?” Leonen asked one of the petitioners during oral arguments on Tuesday, November 18.

University of the Philippines College of Law Dean Pacifico Agabin, a petitioner against the Enhanced Defense Cooperation Agreement (EDCA), welcomed the idea, but expressed doubts that President Benigno Aquino III will do that.

“I think the President, based on pronouncements coming from the Palace, has already ruled that out because the President has taken the position that, as executive agreement, it does not require ratification by the Senate,” Agabin replied.

Leonen pressed the issue. “Is it possible that the relief given by this court would be to compel the President to submit EDCA to the Senate?”

Agabin hesitated but welcomed it. He explained that Senate ratification of EDCA will only cure the procedural infirmity of the agreement. He stressed that there are other challenges against EDCA on “substantive issues.”

Petitioners have maintained that the EDCA, which gives US troops expanded access to military facilities in the Philippines, was a treaty, for which the Constitution requires ratification by the Senate.  Protests welcomed the first day of oral arguments on Tuesday, November 18.

EDCA was signed in April 2014 by Philippine Defense Secretary Voltaire Gazmin and US Ambassador to the Philippines Philip Goldberg to expand US military presence in the Philippines by allowing two new activities: the construction of facilities and the prepositioning of defense assets.

Two petitions were filed before the Supreme Court to nullify EDCA and declare it unconstitutional because it is “de facto” basing. At the forefront of the legal battle is the issue of whether EDCA can stand as an executive agreement or it needs Senate ratification. But a string of other issues were raised to show that the agreement is lopsided in favor of the Americans.

Former Senator Rene Saguisag, in his opening statement to oppose EDCA, recalled the time when he voted in 1991 to evict US bases in the Philippines.

“We remain convinced we voted on the right side of history. I am here in that continuum, that our 1991 collegial vote not be nullified by one man, no matter how much I like him and wish for him to succeed,” Saguisag said, referring to President Aquino.

If the President, who he says he considers his friend, feels that EDCA is necessary, Saguisag said it should follow the proper procedure, which is Senate ratification.

“It’s not up to the President or the defense secretary to decide on something that has inter-generational consequences,” Saguisag said.

A number of SC justices also suggested during the oral arguments that the Supreme Court may not be the proper venue for questions on EDCA for a number of reasons. One of them was that EDCA has not been implemented, so it is a matter of foreign policy and national defense, which are within the powers of the President.

Justices also asked why no senator joined the petitioners, echoing the argument of the Office of the Solicitor General that it’s possible the senators agree that EDCA is a mere executive agreement.

The petitions did not ask for the mandatory transmittal of EDCA to the Senate, which Leonen found curious. When other petitioners opposed the transmission of EDCA to the Senate and demanded its nullification on the ground of the long historical evidence on unfairness to earlier agreements with US, Leonen was, in his words, “taken aback.” Deciding the fairness of EDCA is not the business of the Supreme Court, he said.

Speaking to reporters, Agabin said the possibility of compelling the President to submit EDCA to the Senate would be a “half-baked victory.”

Agabin said he will be personally satisfied if EDCA was ratified by the Senate to correct the procedure. But he recognized that the other petitioners are more concernced with the substance of the agreement. (Editor’s Note: This comment was earlier attributed to Acting Solicitor General Florin Hilbay. We regret the error.)

Besides, it may potentially embarrass the Supreme Court, said Hilbay, because it is “very possible” that the senators agree that EDCA is an executive agreement. – Rappler.com