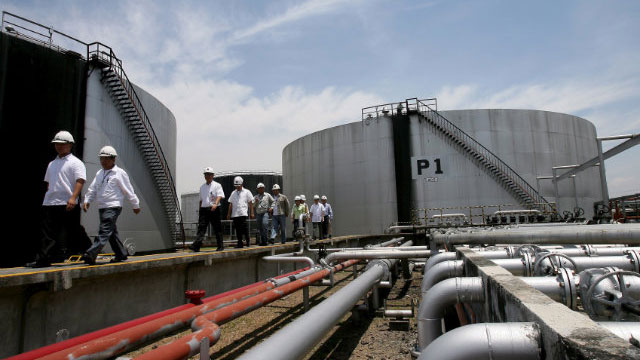 MANILA, Philippines (UPDATED) – The Supreme Court on Tuesday, November 25, ordered the “relocation and transfer” of the oil terminals of multinational companies from Pandacan, Manila, resolving an environment and security concern that 3 administrations failed to address over more than a decade.

Voting 10-2, the High Court on Tuesday, November 25, declared as unconstitutional and invalid Ordinance Number 8187 of the City of Manila, which allowed the continuing stay of the Pandacan Oil Terminals.

It was acting on a case filed by Social Justice Society officers Samson Alcantara and Vladimir Alarique Cabigao against local officials of Manila.

Ordinance 8187 was passed and implemented in 2009 during the administration of Mayor Alfredo Lim. The local council reclassified the 33-hectare site as a heavy industrial zone in order to overturn the 7-year phaseout of the terminal which was initiated by his predecessor Mayor Lito Atienza and had been upheld by the SC.

Between the Lim administration’s 2009 ordinance and the SC’s Tuesday decision, the new mayor, former President Joseph Estrada, had wanted the oil terminals out of Pandacan, and given them until Jan 31, 2016 to shut down their oil storage facilities and relocate to another area.

“The incumbent mayor of the City of Manila is hereby ordered to cease and desist from enforcing Ordinance Number 8187. In coordination with the appropriate government and agencies and the parties hereto involved, he is further ordered to oversee the relocation and transfer of the oil terminals of the Pandacan area,” the High Court said.

The oil companies, which are intervenors in the case, are given 45 days to submit an updated comprehensive plan and relocation schedule to the Manila Regional Trial Court Branch 39.

The relocation, the SC said, “shall be competed not later than 6 months from the date the required documents were submitted.” The lower court “shall monitor the strict enforcement” of the SC decision.

After the Sept 11, 2001 terrorist attacks in New York City in the United States, the city government saw the need to relocate the oil depot.

Situated along the banks of the Pasig River, it poses danger to the residents in nearby communities, as well as to Malacañang Palace – the residence of the President of the Philippines – just a few kilometers away.

Petron Corporation said it would abide by the High Court’s decision. It has, in fact, started the transfer, announcing earlier that it would be out of Pandacan by end-2015.

Petron chairman Ramon Ang had announced in May that the company would spend P15 billion for the relocation to either Rosario, Cavite; Limay, Bataan; or Navotas in Metro Manila.

“By end of 2015, totally we are out of Pandacan. We are law- abiding citizens. When we promised the city government of Manila that within five years we will be moving out of Pandacan, we will. I think we are the only oil firm in compliance to that promise,” Ang said in May.

Shell, on the other hand, said, “Rest assured that Shell will observe the rule of law and good governance.” It refused to comment further until it receives a copy of the court decision.