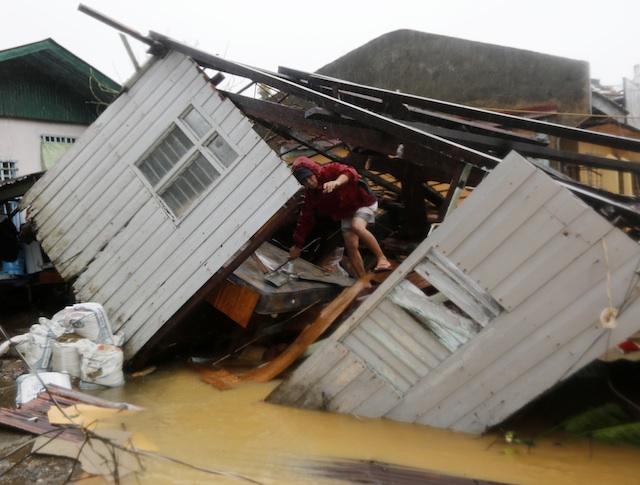 MANILA, Philippines (UPDATED) – At least 3 were killed in the Visayas and nearly a million people were displaced due to Typhoon Ruby (Hagupit), according to initial reports on Sunday, December 7.

The military also separately confirmed at least one casualty in Eastern Samar. Lieutenant Colonel Erwin Alea, the military’s 8th Infantry Division spokesman confirmed that one person was killed in Dolores town, where the typhoon first made landfall Saturday night, December 6.

Pama said they’re still waiting for reports coming from the ground. There are reports of casualties in Dolores but NDRRMC has yet to validate them, he said.

Typhoon Ruby packed maximum sustained winds of 175 kilometers per hour near the center and gustiness of up to 20 km/h when it made landfall in Dolores town. It weakened as it made its second landfall on Masbate.

NDRRMC’s latest report shows that a total of 195,537 families or 902,321 persons were affected by the typhoon. Out of this total, 192,951 families or 896,011 persons are currently being served inside and outside evacuation centers.

The initial estimate of Typhoon Ruby’s damage to agriculture in the Bicol region is pegged at P90.46 million.

Typhoon Ruby is seen to make a 3rd landfall before dawn on Monday, December 8, on Sibuyan Island. It is expected to bring heavy rains and flooding in Metro Manila as it exits to the West Philippine Sea Wednesday morning, December 10.

Several mayors of Metro Manila and nearby provinces have declared class suspensions. The NDRRMC has also recommended the suspension of government work.

A total of 183 domestic flights were cancelled, at east 5 airports were closed, and over 2,000 passengers were stranded nationwide.

Initial reports from Samar island show that damage to infrastructure was due to Ruby’s strong winds, not storm surges, as earlier feared. Photos of downed electric posts and trees circulated in the Internet on Sunday.

The situation is starting to go back to normal in several areas as Typhoon Ruby moves towards the West Philippine Sea. The Department of Social Welfare and Development (DSWD) said thousands have returned to their homes, among them, the evacuees in Southern Leyte who were allowed by the provincial government to do so, after the weather cleared.

The military and the Department of Public Works and Highways are now focusing their efforts on Eastern Visayas to clear roads, airports, and seaports. – Rappler.com