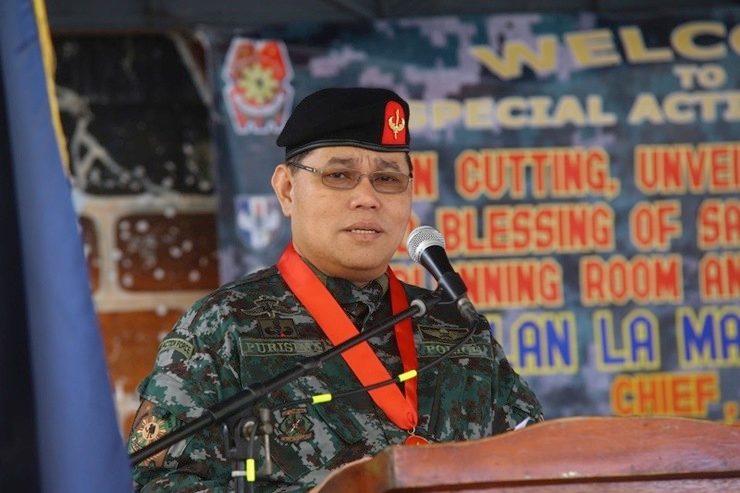 MANILA, Philippines – (UPDATED) Philippine National Police (PNP) chief Director General Alan Purisima wasted no time in appealing a preventive suspension ordered against him by the Office of the Ombudsman.

Purisima’s lawyer later confirmed the same during a press briefing with reporters at Camp Crame. The motion was filed before the Court of Appeals (CA).

PNP spokesman Chief Superintendent Wilben Mayor earlier told media that Purisima would be seeking a TRO but did not say when it would be filed or whether it had already been filed.

In a petition for certiorari filed through his lawyer Kristoffer James Purisima, the PNP chief asked the CA to stop the Ombudsman from implementing its suspension order and to later nullify the same order due to “grave abuse of discretion.”

Ombudsman Conchita Carpio Morales on Thursday, December 4, ordered a 6-month preventive suspension against Purisima and several other police generals over an alleged anomalous contract between the PNP’s Firearms and Explosives Office (FEO) and courier company Werfast.

When the order came out, Purisima was in Saudi Arabia for an official trip. His trip was supposed to last until December 9 but the PNP chief opted to fly back to the Philippines by December 5.

“When you issue a preventive suspension order, two things should concur: evidence of guilt should be strong and [it is assumed] that you’re going to take advantage of your position [in the investigation of the case],” Attorney Purisima told Rappler in a Tuesday, December 9 phone interview.

“The evidence against the PNP chief is not strong because he was only appointed Director General in December 2012 but the contract with Werfast was signed in 2011,” Purisima’s lawyer added.

In a statement released Sunday, December 7, Purisima said the Ombudsman’s findings would eventually “vindicate” him.

The PNP chief said he only signed an order approving the use of couriers to deliver gun licenses issued by the FEO, but insisted the order did not specify which courier would be picked.

“In that sense, the evidence is not strong because although he signed the memo, his subordinates also approved it,” said the PNP chief’s lawyer, referring to a February 12, 2014 memorandum wherein Purisima approved the delivery of firearms license cards to gun owners’ registered addresses.

The memorandum was based on recommendations made by subordinates in the Civil Security Group (CSG), which supervises the FEO.

Attorney Purisima said following the Arias doctrine, the PNP chief cannot be held liable for the mistakes of his subordinates because he merely relied on them in good faith.

“With all due respect, by whatever stretch of the imagination, that is hardly evidence of petitioner’s alleged gross negligence and/or gross neglect of duty, which connotes a breach of duty that is flagrant and palpable. No such breach of duty exists on the part of petitioner,” said Purisima in the petition filed before the CA.

In a previous interview with Rappler, former PNP CSG head retired police general Ireno Bacolod said Purisima was the CSG’s Chief of Directorial Staff when the deal with Werfast was inked. The FEO is under the CSG.

Bacolod’s name was dragged into the controversy, since he is listed as president of Werfast. The former police general, however, claimed he only came to know of his position in the company through the media.

Reports hinted Purisima may have favored Werfast because of his links to Bacolod – a claim Bacolod denied. The retired police general said their time together was limited, since their terms in the CSG only overlapped for 3 or 4 months.

Can the DILG implement?

Purisima has another defense against the order, insisting that delegating the implementation of the order to Interior Secretary Manuel Roxas II is “patently illegal.”

The PNP chief’s camp insists the National Police Commission (Napolcom), sitting as a “collegial body,” should be implementing the order. The Napolcom administers and controls the PNP, and is also tasked to determine sanctions for erring members.

Both Roxas and Purisima are members of the Napolcom – Roxas sits as chairman while Purisima sits as ex-officio commissioner.

It’s no secret in Camp Crame that Roxas and Purisima, both close to President Benigno Aquino III, do not always see eye to eye.

Roxas, who is in Eastern Samar to spearhead relief efforts in areas hit by Typhoon Ruby, earlier said the Department of the Interior and Local Government (DILG) would follow the Ombudsman’s order but did not elaborate on how it would do so.

The DILG sent the suspension order to Purisima’s office in Camp Crame Tuesday, December 9, but Attorney Purisima said it was not received and was therefore not served.

With a motion for a TRO and Purisima’s camp insisting the DILG cannot implement the order, what happens to Purisima come Wednesday, December 10, remains unclear.

Officials – both in national government and the PNP – are also in the dark when it comes to pinpointing who will lead the PNP beginning Wednesday.