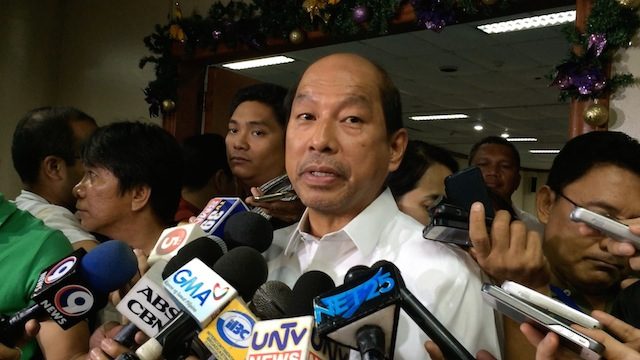 MANILA, Philippines – Budget Secretary Florencio “Butch” Abad welcomed the new definition of savings in the 2015 budget bill that gives greater leeway to the executive branch for Disbursement Acceleration Program (DAP) schemes under the earlier struck down by the Supreme Court (SC) as unconstitutional.

Congress is set to ratify it Monday, December 15.

“I understand that they agreed with us essentially on how we should define savings. What has happened is there is more clarification that was introduced, more explicit. There are very clear examples of when savings are generated,” Abad told reporters after the bicameral conference committee okayed the government budget for 2015 this week.

“It is compliant with the Supreme Court decision,” added Senate finance committee chairman Senator Francis Escudero, who likened the budget process after DAP to “walking a tightrope.”

DAP creatively fast-tracked government spending by allowing Malacañang to pool unreleased and unobligated funds from slow-disbursing programs and declare them as savings so they could be used to finance fast-moving ones. While the SC acknowledged that DAP stimulated economic growth, it said that it also “seriously undercut[s] the congressional power of the purse.”

In his sponsporship speech for the budget in the Senate, Escudero said: “Adjustments will have to be made by Congress to correct and rectify things, and certain processes will have to be implemented to hasten and facilitate the implementation of the projects without violating the Supreme Court decision, and yet without impairing the Executive branch’s need for flexibility in the budget execution phase.”

Thus, the solution is for Congress to redefine savings to give government offices more leeway in moving their budgets while still observing the prohibitions in the SC ruling.

The High Court prohibited the declaration of savings before the end of the fiscal year, specifically from these items: The withdrawal of unobligated allotments from the implementing agencies and the declaration of the withdrawn unobligated allotments and unreleased appropriations as savings prior to the end of the fiscal year and without complying with the statutory definition of savings contained in the General Appropriations Act.

The 2015 budget bill now expressly allows mid-year realignment. The branches of government – executive, legislative, judiciary – and constitutional offices may declare savings any time within the year provided these meet the criteria set in the budget bill, and provided that the government offices submit a regular semestral report on how the savings were used.

Both Abad and Escudero refused to compare the new savings definition to DAP.

“I don’t want to mention the word DAP because it has many unfair connotations. I think we just have to refer to the definition of savings as already crafted by Congress,” Abad replied when asked how this compares to DAP.

The Department of Budget and Management suggested the new definition of savings in the Malacañang-prepared National Expenditure Program (NEP) for 2015 – the document that turned into the General Appropriations Bill in the House of Representatives. (READ: Redefined savings in 2015 budget ‘cures’ SC DAP ruling)

The definition of savings in the 2015 budget bill doesn’t cure the inadequacies identified in the SC’s DAP ruling but it allows some of the schemes disallowed by the High Court.

In public pronouncements, the Senate initially wanted to follow the Supreme Court ruling in allowing savings to be declared only at the end of the fiscal year or at the end of the lifespan of the budget appropriations, the time when it becomes mandatory for government departments and agencies to return unused funds to the national treasury.

Escudero wanted this specifically with projects that did not commence. But the House of Representatives, which generally adopted the DBM version, prevailed in allowing it any time of the year.

Savings may be declared when a project is discontinued with finality or was not started due to circumstances out of the control of the agency. (See definition of savings below)

Sec. 68. Meaning of Savings. Savings refer to portions or balances of any RELEASED appropriations in this act which have not been obligated as a result of any of the following: FINAL discontinuance or abandonment of AN ON-GOING program, activity or project (P/A/P) BY THE HEAD OF THE AGENCY CONCERNED DUE TO CAUSES NOT ATTRIBUTABLE TO THE FAULT OR NEGLIGENCE OF THE SAID AGENCY which would NOT render it possible for the agency to implement the said P/A/P during the validity of the appropriations; Non-commencement of the P/A/P for which the appropriations is released. For this purpose, non-commencement shall refer to the inability of the agency or its duly authorized procurement agent to obligate THE RELEASED allotment AND IMPLEMENT THE P/A/P DUE TO NATURAL OR MAN-MADE CALAMITIES OR OTHER CAUSES NOT ATTRIBUTABLE TO THE FAULT OR NEGLIGENCE OF THE AGENCY CONCERNED DURING THE VALIDITY OF THE APPROPRIATIONS; Decreased cost resulting from improved efficiency during the implementation or UNTIL, the completion by agencies of their P/A/Ps, PROVIDED, THAT THE AGENCIES WILL STILL BE ABLE to deliver the targets and services AS approved in this Act; AND Difference between the approved budget for the contract and the contract AWARD price; PROVIDED, HOWEVER, THAT SAVINGS may likewise refer to available balances arising from unused compensation and related costs pertaining to: (i) unfilled, vacant or abolished positions; (ii) non-entitlement to allowance and benefits; (iii) leaves of absence without pay; AND (IV) UNUTILIZED PENSION AND RETIREMENT BENEFITS ARISING FROM DEATH OF PENSIONERS, DECREASE IN THE NUMBER OF RETIREES, OR OTHER RELATED CAUSES. PROGRAMMED APPROPRIATIONS WHICH HAVE NOT BEEN RELEASED OR ALLOTMENTS NOT OBLIGATED DUE TO THE FAULT OF THE AGENCY CONCERNED SHALL NOT BE CONSIDERED SAVINGS.

Savings may also be declared when the winning bid in a project is lower than the approved cost and when efficient measures allowed the agency to cut down the cost of the project.

“Through no fault of theirs. ‘Yun ang malaking pagkakaiba (That is the big difference). Before there was no such thing. Before, puwede mag-isip ng proyekto at kapag na-approve ang project, sasabihin ay, ayoko na lang. Savings yun,” Escudero explained. (Before, they could think of a project and when the project is approved (and funded by Congress) they could just decide to stop it. That’s savings.)

Escudero said it won’t be “whimsical” and warned of possible suits against the head of the offices if the new definition of savings is abused. “It won’t be whimsical because we said it must be either natural or man-made calamities or causes not attributable to the fault of the agency. Kung kasalanan nila (if it is their fault), they are subject to suit for an invalid use of saving and appropirations,” Escudero said.

The Supreme Court ruling questioned the DBM’s withdrawal of unobligated funds from implementing agencies without proof that the funds are no longer needed by the agencies.

What projects may be funded by savings?

The 2015 budget bill only allows the use of savings to fund items that are covered by appropriations in the General Appropriations Act. (Read Section 69 on the Meaning of Augmentation below)

SEC.69. MEANING OF AUGMENTATION. Augmentation is the act of THE HEAD OF OFFICES AUTHORIZED UNDER SECTION 67 OF THIS ACT TO USE SAVINGS IN THEIR RESPECTIVE APPROPRIATIONS TO PROVIDE ADDITIONAL FUNDING TO COVER AN ACTUAL DEFICIENCY INCURRED FOR THE CURRENT YEAR IN ANY EXISTING ITEM OF THEIR RESPECTIVE APPROPRIATIONS. A DEFICIENCY IN THE APPROPRIATION OF A P/A/P MAY RESULT FROM: JUSTIFIED modifications or adjustments in the P/A/P AUTHORIZED IN THIS ACT; or ADJUSTMENT IN THE COST OF IMPLEMENTING P/A/P DUE TO JUSTIFIED CAUSES. In no case shall a non-existent P/A/P, be funded by augmentation from savings or by the use of an appropriations otherwise authorized in this Act. THE EXISTENCE OF AN APPROPRIATION FOR AN ALLOTMENT CLASS IN A P/A/P IS NECESSARY FOR THE PURPOSES OF AUGMENTATION. AN ALLOTMENT CLASS AS USED HEREIN MAY EITHER BE PERSONAL SERVICES, MOOE OR CAPITAL OUTLAYS.

Movement from one allotment class to another is allowed – Personnel Services (PS), Miscellaneous and Other Operating Expenses (MOOE) and Capital Outlay (CO).

But Escudero noted that the SC ruling which says an allotment class that was not funded cannot be augmented.

The example is Project Noah, which provides local flood hazard maps and 7-day weather forecasts. The project was given a budget for MOEE but got nothing for PS and CO. Escudero said savings cannot fund PS and CO for Project Noah because there is nothing to augment.

The 2015 budget bill also does not allow cross-border transfers between the branches of government. This was what made DAP controversial.

DAP was an unknown budget scheme until now-indicted plunderer and opposition Senator Jose “Jinggoy” Estrada delivered a privilege speech alleging that huge sums through the program were distributed to senators for the impeachment of former chief justice Renato Corona.

On the other hand, the Senate prevailed in limiting the use of savings only to released allotments. Released funds refer to sums already downloaded from the national treasury to the accounts of government offices. In government bidding for projects, for example, funds are only downloaded to the agencies once the bidding process is completed and a winning bidder has been identified.

The House version sought to allow savings to be declared from any programmed appropriations, which covers all items in the budget law except the bulk titled “unprogrammed funds.”

But the limitation to released funds is not absolute.

“Savings may likewise refer to available balances of appropriations arising from unused compensation and related costs pertaining to: (i) unfilled, vacant or abolished positions; (ii) non-entitlement to allowance and benefits; (iii) leaves of absence without pay; and (iv) unutilized pension and retirement benefits arising from death of pensioners, decrease in the number of retirees, or other related causes.”

Malacañang is adamant in saying that DAP is necesssary to fast-track growth in the economy. The government sought the reversal of the SC ruling. How Congress moves to redefine savings will affect the government’s motion remains to be seen. – Rappler.com