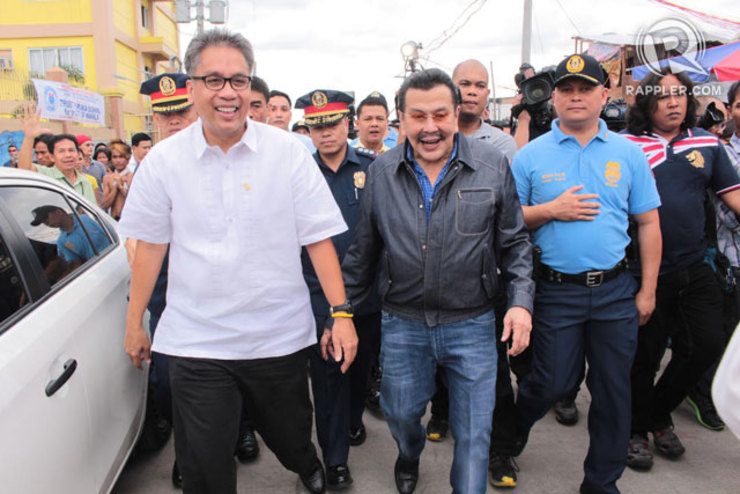 Facebook Twitter Copy URL
Copied
'He was one of my most competent cabinet members,' former president now Manila Mayor Joseph Estrada says of Interior Secretary Manuel Roxas II, who was trade secretary during his administration

This was on the mind of those who listened to Estrada’s speech at an event in Baseco on Thursday, December 18.

Estrada had nothing but warm words and praise for Roxas, who once served as his trade secretary.

Estrada said Roxas, who was at the event, pushed for e-commerce during his stint as trade chief, paving the way for the business process outsourcing  (BPO) boom in the country.

“He created thousands of jobs,” Estrada told a crowd of informal settler families.

But even before anyone could imagine Estrada raising Roxas’ hand in the lead-up to the 2016 elections, the political powerhouse added: “Hindi ako nangangampanya. Nagsasabi lang ako ng totoo (I’m not campaigning here. I’m just telling the truth).”

But is Estrada open to endorsing Roxas? He’s not closing any doors.

“Alam naman niyang may kanya-kanyang partido kami….Depende ‘yun (He [Roxas] knows we have our own parties….It depends),” Estrada told reporters, before leaving the compound.

Estrada made the statement as talk on the 2016 elections intensifies. Roxas is perceived to be the ruling Liberal Party’s standard bearer for the polls.

The Manila mayor, meanwhile, is a political ally of Vice President Jejomar Binay who has announced his presidential bid in 2016. Estrada and Binay co-founded the United Nationalist Alliance (UNA) which will be turned into a party in time for Binay’s presidential campaign in 2016.

Binay, the subject of a Senate investigation, has been suffering from plunging numbers in the 2016 preference surveys but remains the frontrunner. In contrast, Roxas has slid from 2nd to an even farther 5th in the polls on potential presidential candidates.

Estrada had earlier “endorsed” Senator Grace Poe, also a leading contender for 2016. Binay had brushed off Estrada’s “endorsement” of Poe and suggested that the former president might have been joking when he made it.  – Rappler.com