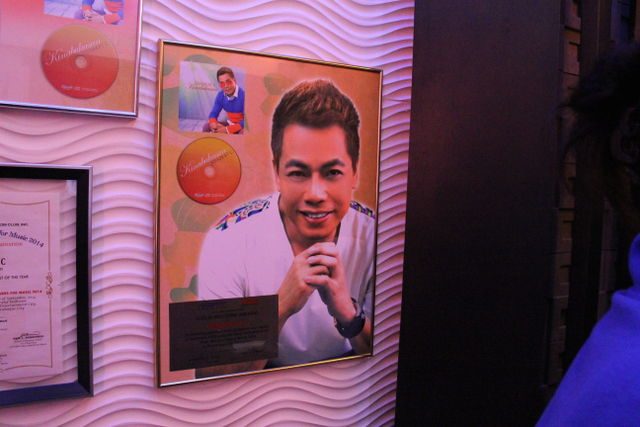 Facebook Twitter Copy URL
Copied
Colango, who was able to buy his way into the world of the prison's top criminal kingpins, used his time in prison to make himself a music star

MANILA, Philippines  – Crime lord “Herbert C” was enjoying national fame and growing iTunes success after reinventing himself as a lovelorn balladeer from inside the Philippines’ biggest jail – until police cut short his career.

Herbert Colango lost his recording studio and other bribe-induced musical privileges after a raid on the secret prison villas kept by 20 of the nation’s most notorious robbery, kidnapping and drug kingpins.

The Philippines’ prisons have long had a reputation for graft, but Monday’s raid shocked the nation with the justice secretary expressing outrage that Colango and the others were “living like kings.”

“We are very angry because they continue to live lives of luxury,” Dante Jimenez, chairman of the watchdog group Volunteers Against Crime and Corruption, told the Agence France-Presse (AFP).

“It’s like they just transferred from one mansion to another.”

Colango entered Bilibid in 2009 after a near decade-long reign as the leader of a feared bank robbery gang.

“His gang was so bold and daring that their presence alone literally swept the vaults of all banks in all urban areas nationwide,” former Bilibid prison head Venancio Tesoro said in a post on his blog.

Police say one of his gang’s bank heists on the outskirts of Manila left 10 people dead, making it one of the country’s bloodiest robberies. Colango was sentenced to 12 to 14 years in jail.

Bilibid is infamous for overcrowding and the brutal conditions — it was built to accommodate 8,900 inmates but currently houses more than 23,000.

Colango, though, was able to quickly buy his way into the privileged world of the prison’s top criminal kingpins, some of whom have previously even been caught leaving the jail for short periods of time. A star is born

With lots of time on his hands, Colango decided to pursue his long-held ambition of becoming a music star, and rebranded himself “Herbert C”.

He had a music studio built inside his prison villa and recorded a 10-song album of syrupy love songs called “Kinabukasan”, which means “Future”.

Colango, who is believed to be in his late 30s, was picked up by one of the Philippines’ big music labels, Ivory Music and Video, and his first album, released this year, was a chart success.

In one of many clips about his career posted on YouTube and other social media, Colango appears at a concert in the Bilibid gymnasium where he accepts an Ivory “platinum” record award for selling 15,000 albums.

He also celebrates being voted “best new male recording artist” by a group of entertainment journalists this year, an accolade that garnered mainstream media coverage.

“I’ve always dreamt of becoming a recording artist,” Colango, who portrays himself on Facebook as a newly devout and repentant Catholic, told local broadcaster ABS-CBN in a recent jailhouse interview.

“I was raised well. I am a victim who lost his way.”

Colango’s album can be bought for $3.99 from Apple’s iTunes store, and is also available on the streaming music service Spotify.

AFP contacted Ivory on Thursday to ask about its relationship with Colango, but a staffer who answered the phone said the person in charge of his career was on leave and unavailable for comment.

In the album’s lead single, which like his other songs are posted on YouTube, Colango sings in a raspy baritone of the pain of not being able to profess his love to a woman.

The song’s music video was filmed in his prison studio, with him wearing lipstick and thick make-up that fails to hide acne scars.

Colango, in a long-sleeved Bart Simpson shirt and auburn-tinted shades, sits on a bar stool while singing, backed up by a full band like a lounge singer.

Bureau of Corrections’ director Ferdinand Bucayu insisted on Thursday he had not known about Colango’s music career or special privileges, and pointed the finger at corrupt prison officials.

“I have nothing to do with what was happening,” Bucayu told AFP in a phone interview.

Jimenez, the head of the crime watchdog, scoffed at Bucayu’s professions of ignorance.

“That’s crazy. And (if true) it only shows how rotten the system is, that the leadership can be compartmentalised and not know what is happening,” he said.

“Everyone needs to be replaced and there should be a separate island to keep prisoners like these.”

For the time being, Colango and the other crime lords have been removed from Bilibid and taken to a high-security facility of the justice department’s investigation unit.

But Justice Secretary Leila de Lima said this week that corruption in Bilibid was institutionalised and she could not immediately sack all the corrupt prison officials.

Which leaves open the possibility of Herbert C or another crime lord doing the jailhouse rock once again. – Rappler.com