Pope warns vs threats to families

Jan 16, 2015 8:41 PM PHT
Rappler.com
Facebook Twitter Copy URL
Copied
Prayers, he says, are the best weapon against ideologies that go against the basic unit of society, citing the problems of migration, poverty, and disrespect for life 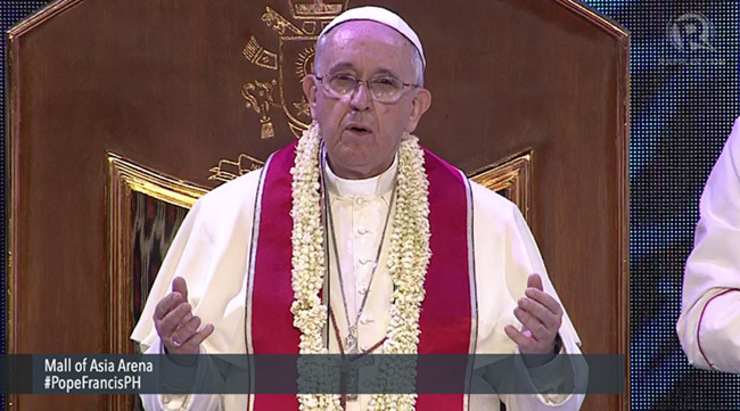 MANILA, Philippines (UPDATED) – In a much-applauded speech that’s both fun and warm, Pope Francis warned Filipinos against the “ideological colonization” that threatens to destroy the family.

In a gathering dubbed the “Encounter with Families” at the SM Mall of Asia Arena late Friday afternoon, January 16, Francis told the audience of about 20,000 Filipinos that families – “your greatest treasure” – have to be protected.

The charismatic pontiff clearly enjoyed this event with diverse groups of Filipinos – indigenous people, the urban poor, persons with disabilities, the laity, the sick and the elderly, the middle class and the wealthy. (READ: Pope to families: ‘Don’t lose the capacity to dream’)

He asked them to find time to pray together. “Resting in prayer is especially important for families,” he said. “It is where we learn to pray.”

The Pope warned against an “ideological colonization that tries to destroy the family.” He stressed: “We have to be careful.”

He noted how families around the world are threatened by “efforts of some to redefine marriage.”

This portion of the speech drew applause from Catholic bishops and priests who attended the event. The Catholic Church here clashed with the Aquino government over a reproductive health law that it managed to pass in December 2013 – despite fierce opposition from the Church

Church leaders called the law evil and went against Catholic tenets on the protection of life.

The Pope stressed that Pope Paul VI “had the strength to defend the openness to life.”

Francis also pointed out how economic difficulties forced many Filipinos seek employment abroad, thus separating families. He has spoken on the threat of migration on the family.

During the almost 2-hour long event, the Pope listened to the stories of 3 Filipino families, who spoke about their experiences of poverty, forced separation through migration, and of living in with disabilities.

In his response to the 3 families’ testimonies, Francis decided to stray from his prepares speech and spoke off-the-cuff, but not before apologizing for his “poor English.” Instead, the pontiff spoke in a language closest to Filipino: Spanish.

Addressing the modern-day issues of Filipino families, Francis urged Filipinos to dream and to reflect. “How many solutions are found to family problems if we take time to reflect?” said Francis in Spanish.

The Pope even offered married couples advi​c​e. “Think of your husband or wife… [and] dream about the good qualities that they have… don’t ever lose the illusion of when you were boyfriend and girlfriend,” said the pontiff, much to the amusement of the crowd.

Families ​are being torn ​apart ​by materialism and misplaced priorities​, he said. “It’s not born of the dream that we have from God from prayer and the mission that God gives us. It comes from outside, the Pope added.

“Let us not lose the freedom to take that mission forward that God has given us. And just as our peoples were able to say no to the period of colonization.”

“As families we have to be very wise and very strong with fortitude to say no to these initiatives of colonization that could destroy the family,” he said.

Challenges to the Filipino family

The Pope has repeatedly cited migration, poverty, “irregular relationships,” and homosexuality as the major challenges that families face.

The meeting with families came a few months after the Pope convened in October 2014 an Extraordinary General Assembly of the Synod of Bishops to discuss “pastoral challenges of the family in the context of evangelization.”

During the July 2013 World Youth Day in Brazil, he said: “It is very important to reaffirm the family, which remains the essential cell of society,”

However, while the Filipino Catholic family remains intact, it is buffeted by changing norms and standards. (READ: The Filipino family the Pope will meet) – with reports from Bea Cupin/Rappler.com