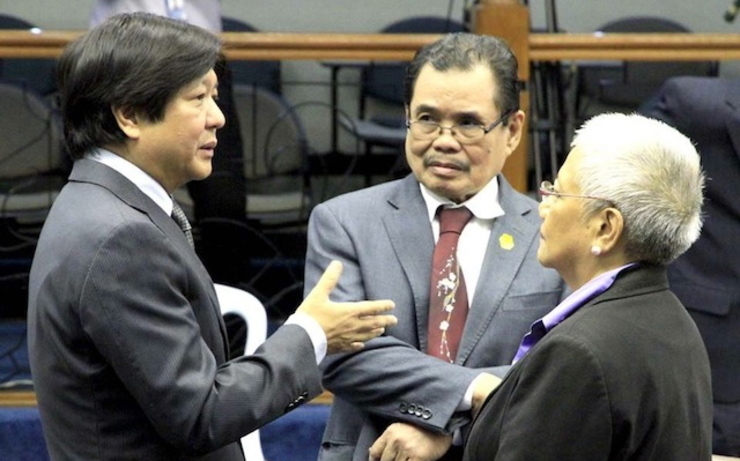 MANILA, Philippines – Senator Ferdinand “Bongbong” Marcos Jr on Tuesday, January 20, warned that the passage of the proposed Bangsamoro Basic Law could be delayed if the issue on how constitutional issues should be tackled is not resolved soon.

While their counterparts at the House of Representatives are set to conduct their final public hearing on the issue on Wednesday, January 21, the Senate is still set to conduct 4 more hearings.

Senator Miriam Defensor Santiago, chair of the committee on constitutional amendments and revision of codes, has scheduled hearings on January 26 and February 2, focusing on the constitutional aspects of the measure.

To fast-track the proceedings and help the Senate beat the deadline for passing the bill by March 2015, Santiago and Marcos are willing to conduct parallel hearings together. Santiago is of the position that the proposed law is unconstitutional because it creates a substate.

The arrangement was supposed to be formalized on the floor on Tuesday. However, the Senate plenary – upon the suggestion of Senate President Franklin Drilon – decided to refer the matter to the committee on rules instead of resolving it right away.

Marcos said he referred all constitutional questions to Santiago’s committee earlier to allow all 3 committees to work together.

He said the committee on local government should first conclude hearings with the peace and unification committee, and then work with Santiago’s committee.

This was not an issue at all at the House of Representatives. In September 2014, Speaker Feliciano Belmonte Jr moved to a create a supercommittee composed of 75 members once it was confirmed that the bill was ready.

In a separate interview, Drilon gave assurances that the Senate will pass the Bangsamoro Basic Law by March 18, the last day of session before the long summer break.

Drilon said he hopes the committees would invite members of the 1986 Constitutional Commission in the succeeding hearings.

The measure, which seeks to create a parliamentary form of autonomous region with greater fiscal and political powers, aims to end 4 decades of war in Mindanao. – Rappler.com