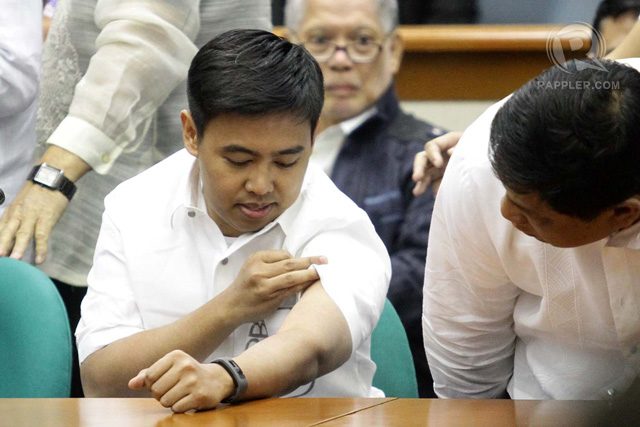 Facebook Twitter Copy URL
Copied
'The basis for his contempt was the non-appearance and this was remedied when he was brought to the session hall,' Senator Trillanes explains why the Makati mayor was released almost immediately after his arrest

MANILA, Philippines – With a throng of allies, aides, and family members, Makati Mayor Jejomar Erwin “Junjun” Binay Jr finally faced the Senate, but not until after two hours of back-and-forth discussions and screaming supporters that senators branded as “drama.”

After his arrest on Thursday, January 29, Binay appeared at the Senate inquiry into corruption allegations against his family, but stressed that he was “forced,” “bruised,” and “dragged” from the Senate basement to the session hall.

The son of Vice President Jejomar Binay told senators that he will comply with their order to have him detained at the Senate, but will not testify before the Senate blue ribbon subcommittee.

“Walang dahilan para humarap ako dito. Nasabi ko na ang lahat ng dapat sabihin. I manifest that I will no longer participate in the proceedings, respectfully,” Binay said. (There is no reason for me to face this probe. I already said all that I can say.)

Senators did not press him to address allegations of corruption in Makati infrastructure projects, and later let him go.

Subcommittee chairman Senator Aquilino Pimentel III ordered the Senate sergeant-at-arms to bring Binay to the session hall after he and Trillanes spent two hours trying to convince the mayor to voluntarily appear.

During the break, Pimentel and Trillanes went down to the Senate basement several times to talk to Binay privately but were unable to persuade him.

Binay, his lawyer, and his spokesmen made it a point to stress that the mayor went to the session hall “against his will.” Binay maintains that the order only requires his detention but the senators cannot force him to speak.

His supporters in the Senate gallery screamed when he was finally brought to the session hall. When Trillanes asked Binay if he was okay, his supporters again screamed, prompting Pimentel to suspend the session, and to call for order.

Trillanes was overhead saying, “May script!” (There’s a script.)

In the hearing, Pimentel explained to Binay that the committee was giving him the chance to explain allegations that the Makati City Hall II parking building, and Makati Science High School were overpriced.

“This is not personal. We are enforcing processes,” Pimentel said.

Pimentel though did not order Binay to answer corruption allegations. The senator said he “can sense” that Binay wants to cooperate with the investigation, and will respond to the cases pending before the Ombudsman.

Pimentel told Binay, “You are free to go,” drawing applause from Binay’s supporters.

Binay was cited in contempt on Monday for snubbing the Senate’s summons for him to appear in all but one out of 13 hearings. The Senate Sergeant at Arms arrested him at the Makati City Hall Thursday morning.

The Senate is probing allegations the Binay political dynasty amassed wealth as leaders of the country’s financial capital in over two decades. Vice President Binay is the frontrunner in the 2016 presidential polls, and the opposition standard-bearer. He rejects the inquiry as a tool of his opponents to derail his candidacy. Battle of videos: ‘Dragged’ or ‘escorted?’

Why did senators cite Mayor Binay in contempt only to let him go?

“I believe the Senate was able to assert its authority while minimizing the drama they hoped to achieve. We had to order Mayor Binay’s release because the basis for his contempt was the non-appearance, and this was remedied when he was brought to the session hall,” Trillanes said.

Trillanes said he wanted to tackle the allegedly anomalous deal between the Boy Scouts of the Philippines and Alphaland implicating Vice President Binay, but this will have to wait for the next hearing.

Even after he was freed, Binay complained about the way the Senate treated him.

In a press briefing, Binay said he was hurt when Senate security brought him to the session hall, pointing to his bruise. The office of Binay’s sister, Senator Nancy Binay, even released a video saying the mayor was “forcibly moved” to the session hall.

“Labag sa karapatan ko na pinilit ako magpakita doon. I had to be bodily taken to plenary. I was forced, physically,” Binay said. (It was against my rights that I appeared there.)

Yet the Senate Public Relations and Information Bureau released its own, longer video to show Binay was merely “escorted” to the session hall.

Who is telling the truth? Watch the videos here:

Sergeant-at-arms Jose Balajadia Jr affirmed this. “He was never dragged. Naghahatakan kami ng tao niya since they were resisting me. I had to insist on what I can do. Kinokontra nila ako but since I had to do my job and my mandate, I had to force my way.” (His people and I were pushing and pulling and going against me.) The mayor brought with him top aides of the Vice President, his sister Makati Representative Abigail Binay, and allies Navotas Representative Toby Tiangco and Cavite Governor Jonvic Remulla to the Senate.

Mayor Binay and Representative Binay thanked their supporters but warned that the “demolition job” against their father will continue.

With his children in tow, the mayor said what pained him was seeing them affected.